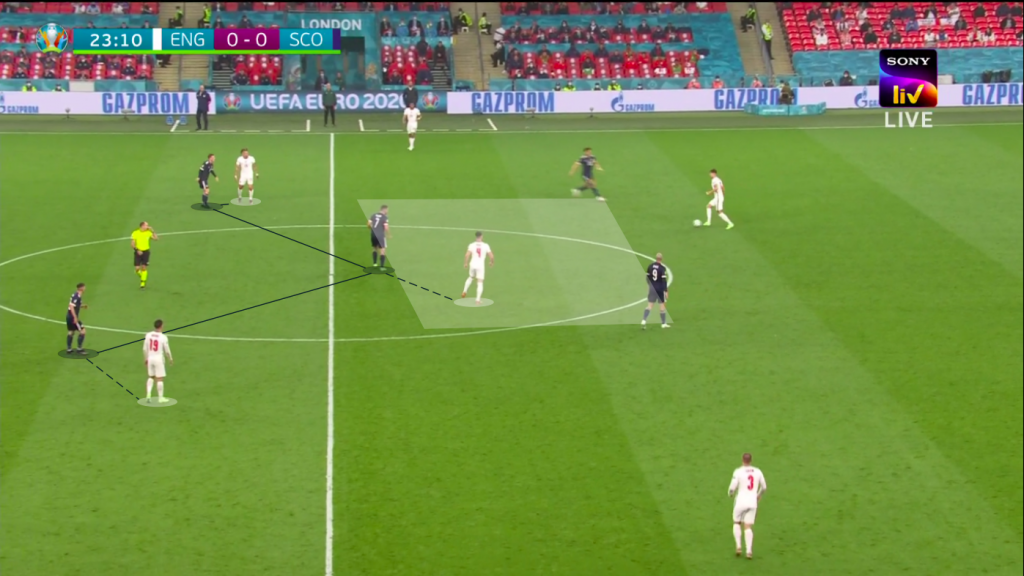 For the 100th time in a competitive football match, less-than-friendly neighbours England and Scotland prepared to face each other.

This was their first clash at the Euros since (look away Scottish readers) 1996, which was also at Wembley Stadium, where a certain man with bleached hair scored a rather good goal.

This time around, England and Scotland’s match was their second group game, but the difference was that the hosts had won their opening clash while the visitors had lost theirs, as opposed to both drawing.

So, this game bore greater importance for Steve Clarke’s side, who needed to win to keep their chances of progression to the knockouts in their own hands.

A gripping tactical battle followed, which involved both managers making various changes during the match to give their side the edge.

In the end, neither net was rippled even though England came as close as the woodwork, and Scotland had a shot (which admittedly might have been going just off target) cleared off the line, so the spoils were shared.

In this analysis, we will attempt to break the match down by focusing on how Scotland restricted their opponents and kept a well-deserved clean sheet.

The home side had a good beginning to the match as they dominated possession and territory and created three of their nine chances in just the first 15 minutes.

In the initial stages of the match, Scotland’s front-two in their 5-3-2 stayed quite narrow out of possession, looking to prevent the English centre-backs from progressing the ball centrally.

The issue here was that the hosts’ full-back would be left free as they did not push too far forward on the wings and pretty much stayed in line with Declan Rice (the holding midfielder), which would then drag one of the Scottish midfielders out of position and free up either Kalvin Phillips or Mason Mount depending on which flank the ball was on. 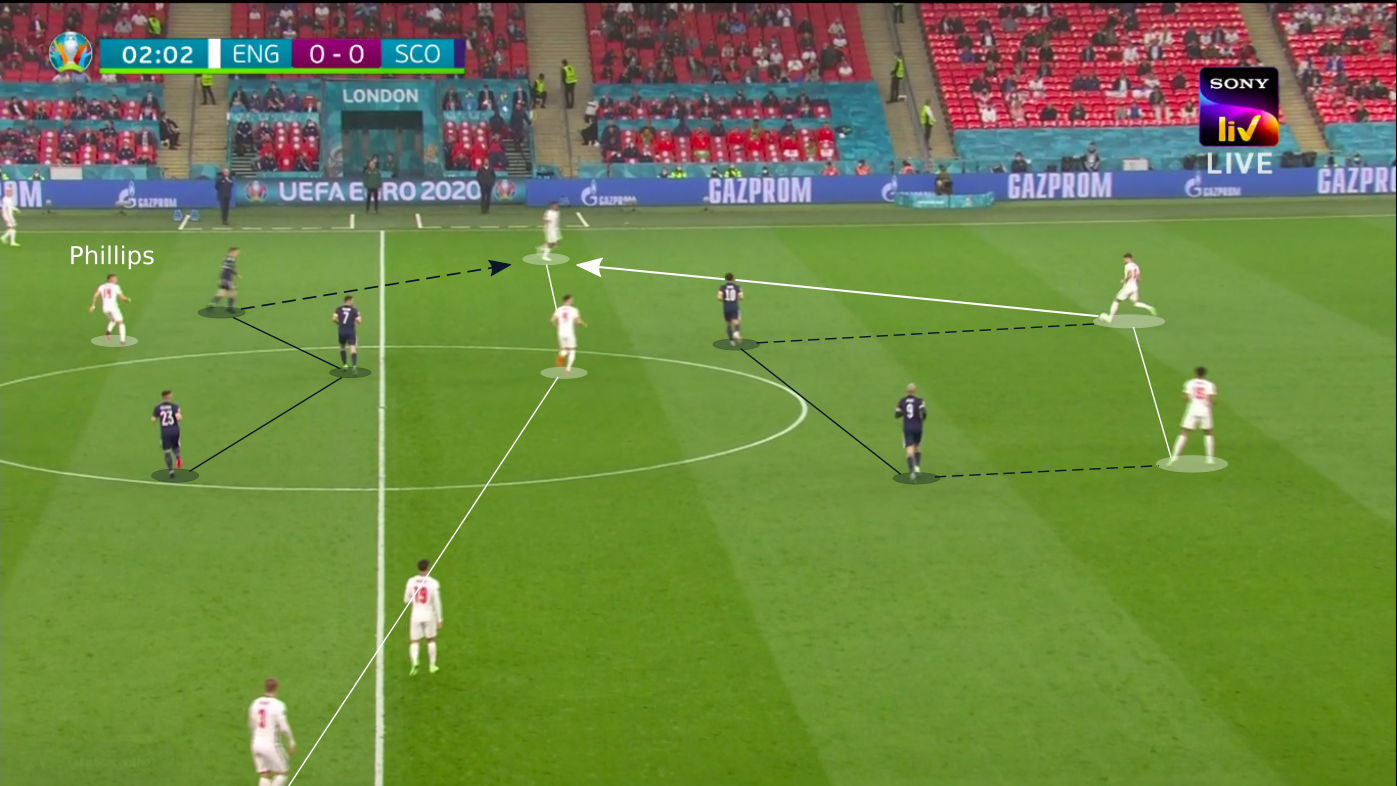 So England were able to continue to use the attacking mechanisms that were deployed against Croatia – particularly the one on the right where Phil Foden would drop deep and leave space for Phillips to make a run from midfield into, before usually looking for him with a chipped ball. 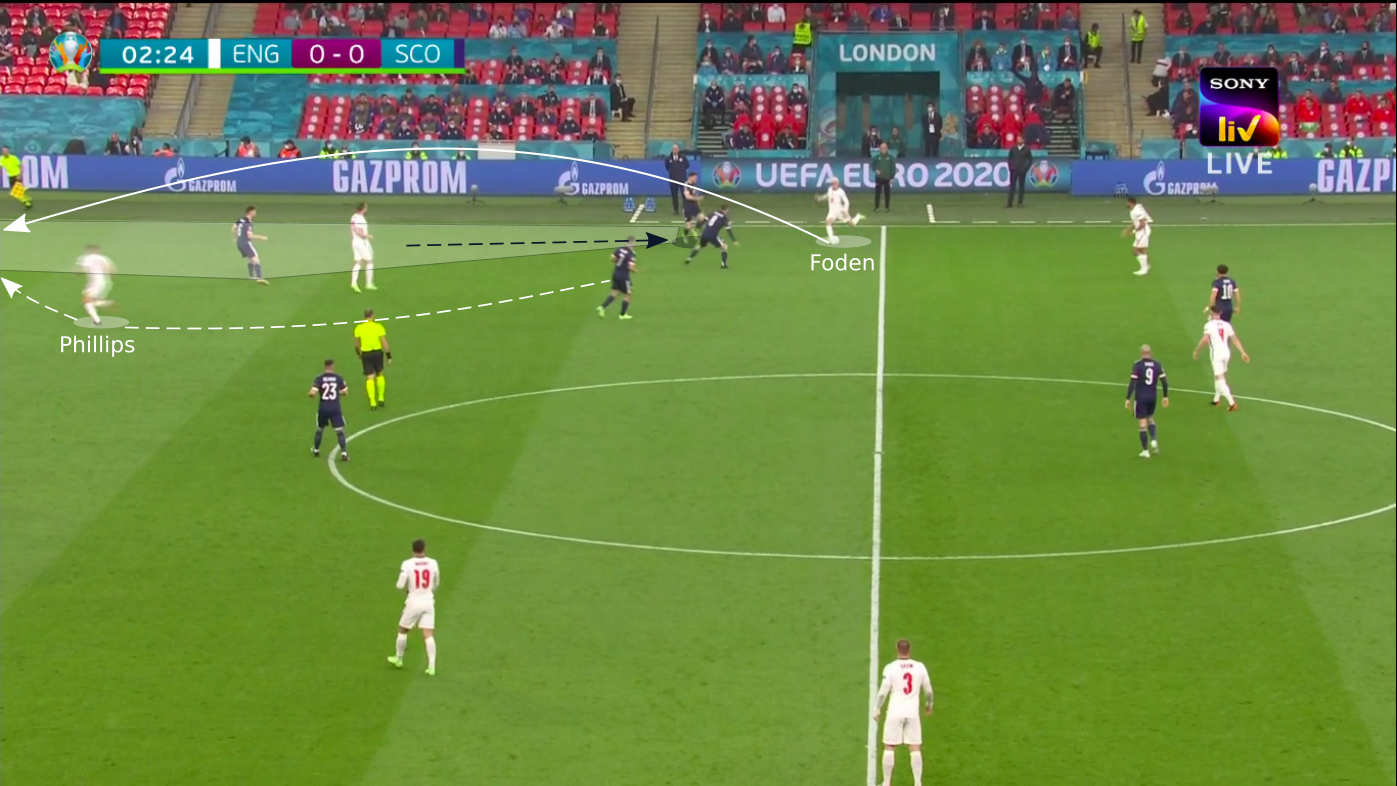 The key change in England’s attacking system from the last game was that the full-backs were allowed to get forward much more often (Luke Shaw and Reece James were second and third respectively in terms of touches in the attacking third for England), which is why they often exploited the space created in midfield when a Scottish player would step out to meet them by playing a one-two with an attacker and making a run inside.

This was especially prevalent on the left, where Mason Mount’s clever positioning served to pin the opposition defenders and magnify the empty space in the middle of the pitch. 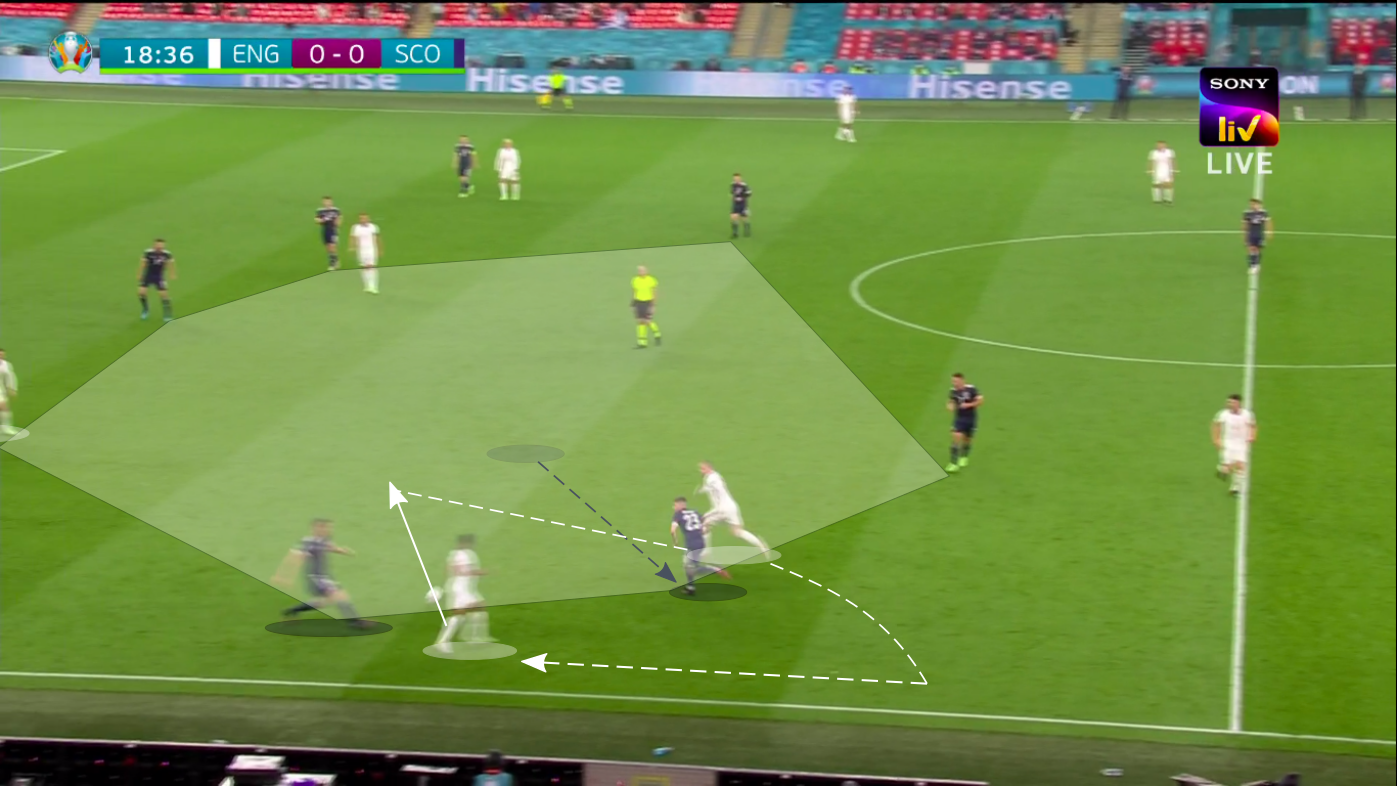 Scotland were quick to recognise the issues and come up with a solution, so about 20 minutes into the match, we began to see a different defensive plan being used by Clarke’s men.

The front two were now split further away from each other, and their main task was to block any forward passes being played to the English full-backs by screening off the wide regions. 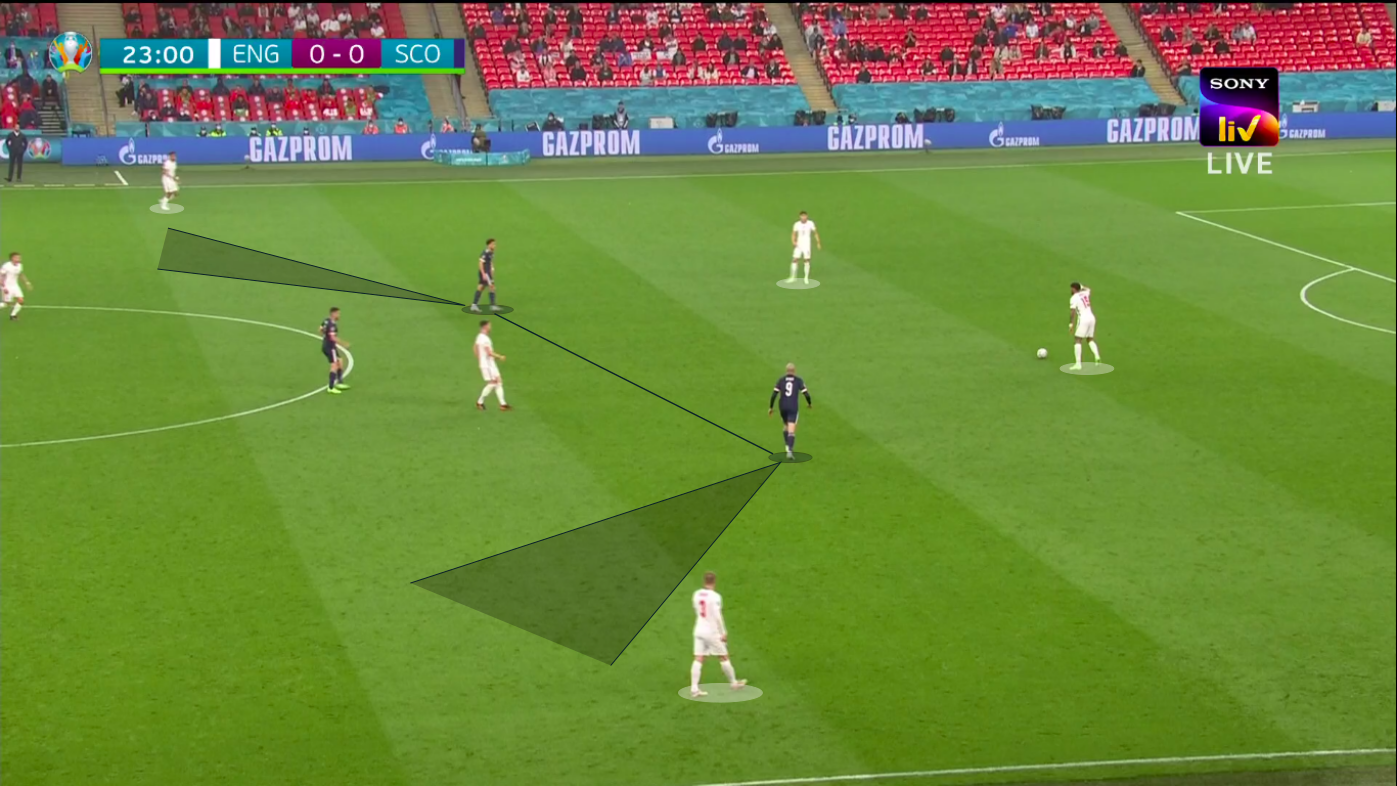 This meant that if the hosts were to look for their wide defenders, they would have to play the ball behind them or into their feet, so by the time they were able to control it and turn, a Scottish forward would be in front of them. 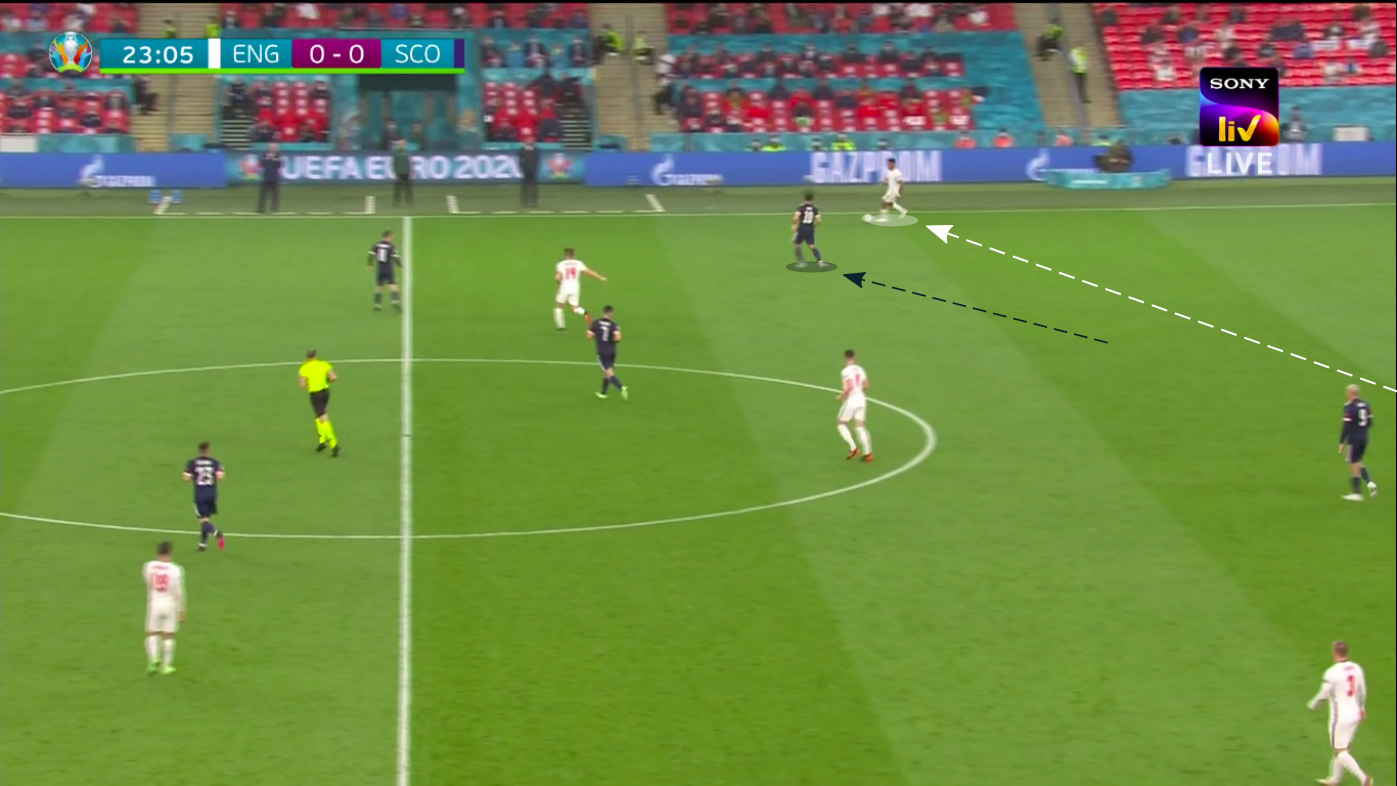 The tradeoff here was that Scotland had to abandon their plan of blocking passes into midfield, but they did have a direct three-on-three in that region, so all they had to ensure was that none of their players were outclassed or outmatched in the centre of the pitch. 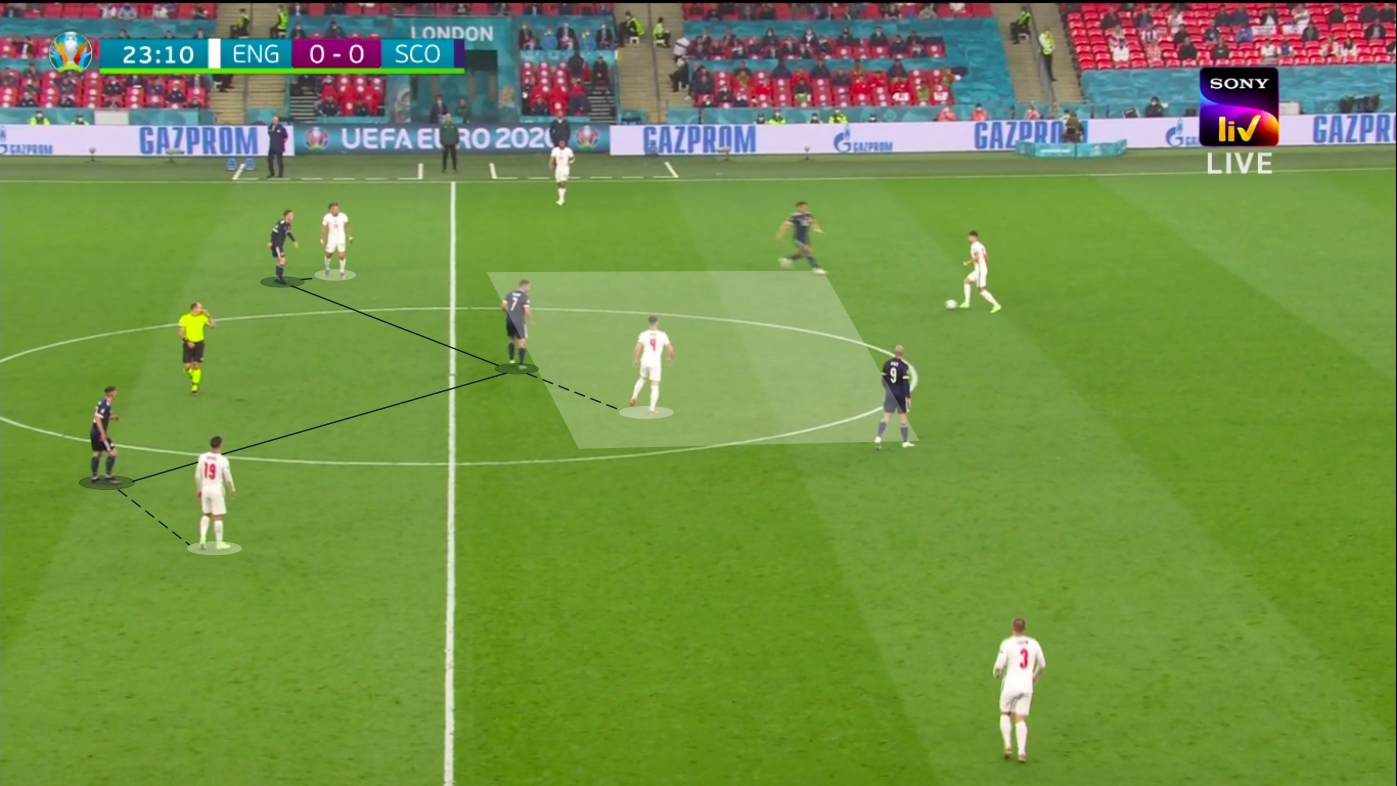 Luckily for them, their trio had an absolutely splendid match, with Billy Gilmour keeping his clubmate Mount firmly in check, John McGinn pushing forward to prevent Rice from getting too comfortable on the ball and Callum McGregor closely watching Phillips. 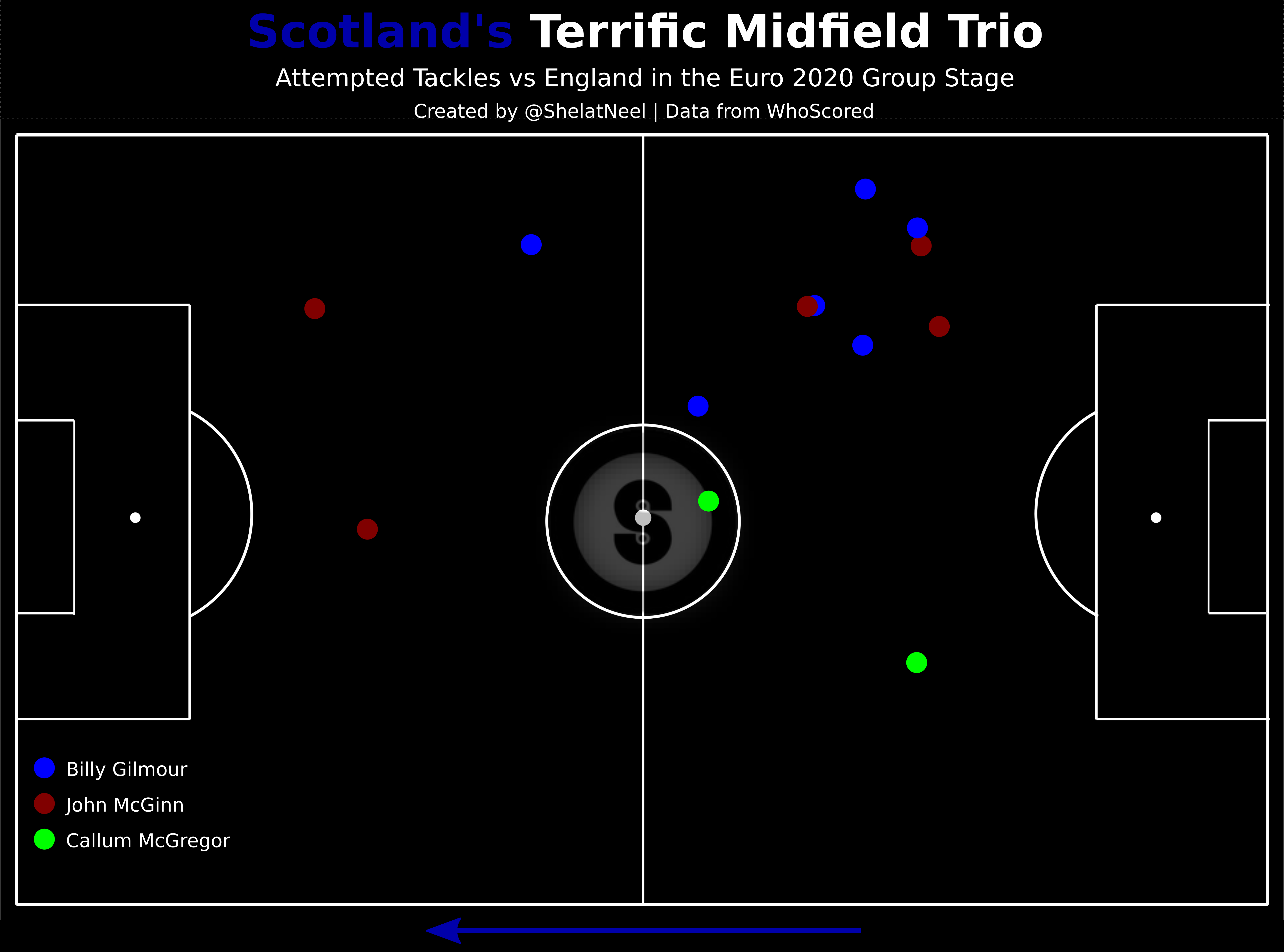 With Scotland making these tactical tweaks and successfully restricting England from attacking, the ball was in Gareth Southgate’s court as he had to try and find a way to break the Scottish defence.

Unfortunately, his return could not clear the net, as his decisions were questionable at best and did not have the desired outcome.

The English manager could have done a couple of things at half-time. Firstly, he might have wanted to ask his side to play more crossfield balls to be able to find a full-back in space when a Scottish forward had moved across to one side, but his men only attempted 18 such passes throughout the match with Shaw and James making one each.

The second option might have been to play more direct football. Often against Croatia, England looked to play long balls in behind the opposition defence for the likes of Raheem Sterling and Foden to chase, and with Scott McTominay in the Scotland defence, this should have been even more tempting.

However, it rarely happened in this match, with the back-four only completing only 14 passes into the attacking third altogether.

Part of the reason for that might also have been Harry Kane’s sub-par showing, as he looked fatigued and was never in the right areas of the pitch for a striker.

This was possibly because his work at Tottenham Hotspur had hard-wired him to keep dropping back or drifting sideways. He only managed 19 touches, and his heatmap does not look good at all: 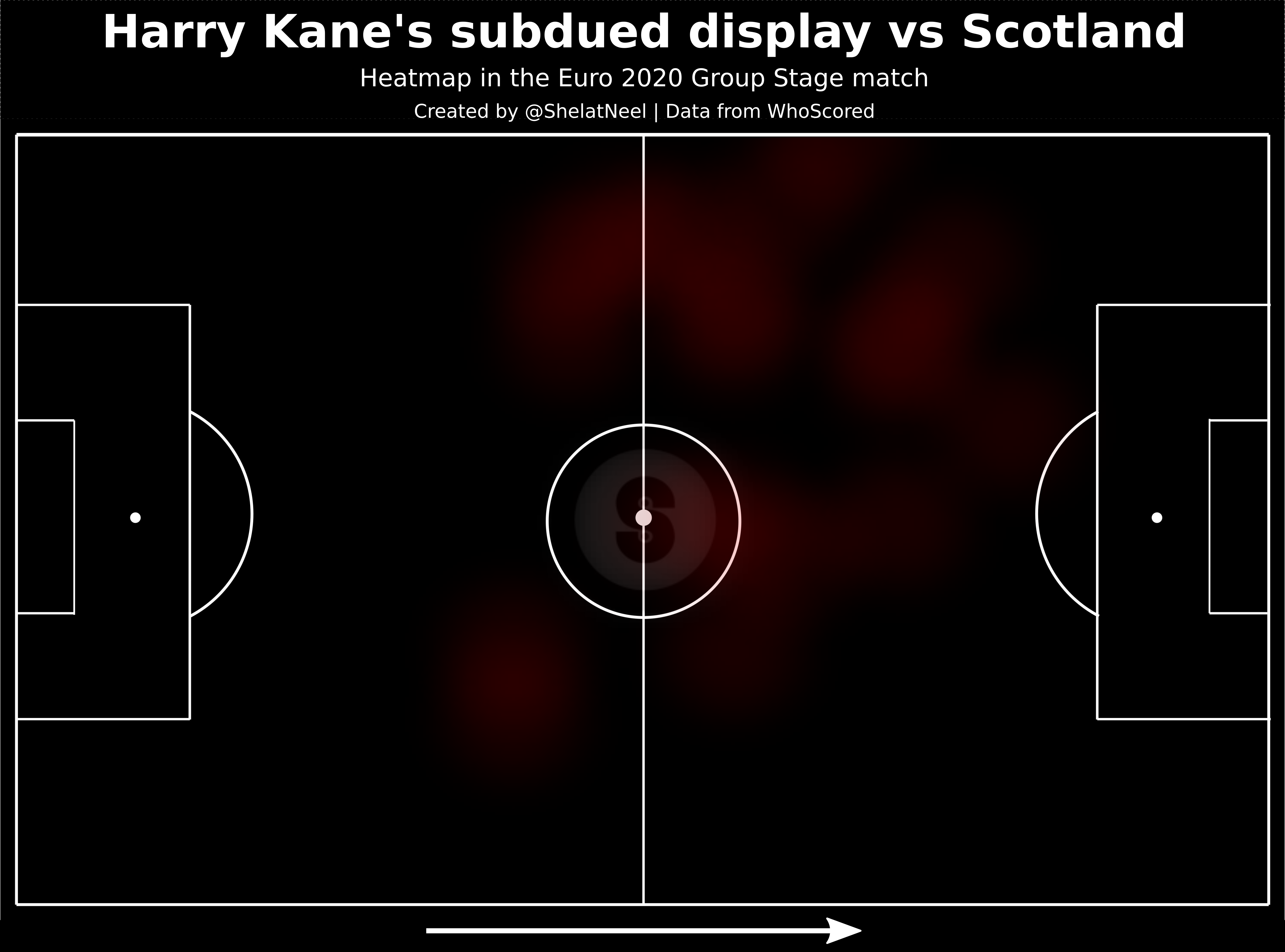 Alternatively, Southgate could have asked his deeper central players to attempt more risky line-breaking passes, but that was not done either, as Rice, John Stones and Tyrone Mings only managed seven progressive passes among themselves.

Rice did not have a great game as he was very conservative with his passing, which is why Phillips had to drop deep a lot more often than he would have liked to as he registered just eight fewer touches in the midfield third than his compatriot from West Ham United.

The 50-year-old manager’s substitutions were sub-par as well. In his first change, he brought England’s most lively attacker (Phil Foden) off for Jack Grealish, when he could easily have brought Sterling off instead to have two tricky wingers on the pitch.

His only other change saw Kane replaced, and while that was the right call, the man going on the pitch arguably should have been Dominic Calvert-Lewin, whose aerial presence might have been useful in a match where 25% of shots were headers and 20% of the total came from set-pieces.

Oh, and Jadon Sancho was right there.

This match probably epitomises the frustrations that England fans have with Southgate, which mostly rely on his lack of tactical flexibility during a match.

Time and again, his plans get undone when the opposition make some tweaks in-game, and he rarely ever responds satisfactorily.

In this case, though, a lot of credit should be given to Clarke and each of the Scottish players as well, who were smart enough to come up with a quick solution to their issues and executed it to perfection.

There was a point where their attacks looked a lot more threatening with the wing-backs and an overlapping Kieran Tierney causing problems for the English defence in the wide areas, and this was a really positive performance all-round.

The Tartan Army may only have one point in the bag from two games, but a win against an out-of-form Croatian side would leave them with some very realistic chances of making the knockouts, so all hope is not lost for them.

Despite this poor performance, England are probably through, however where they finish is still undecided as they prepare to take on Czech Republic, who are level on points with them and possess a superior goal difference.

So, it’s still all to play for in Group D, as the excitement and intrigue of Euro 2020 continue.