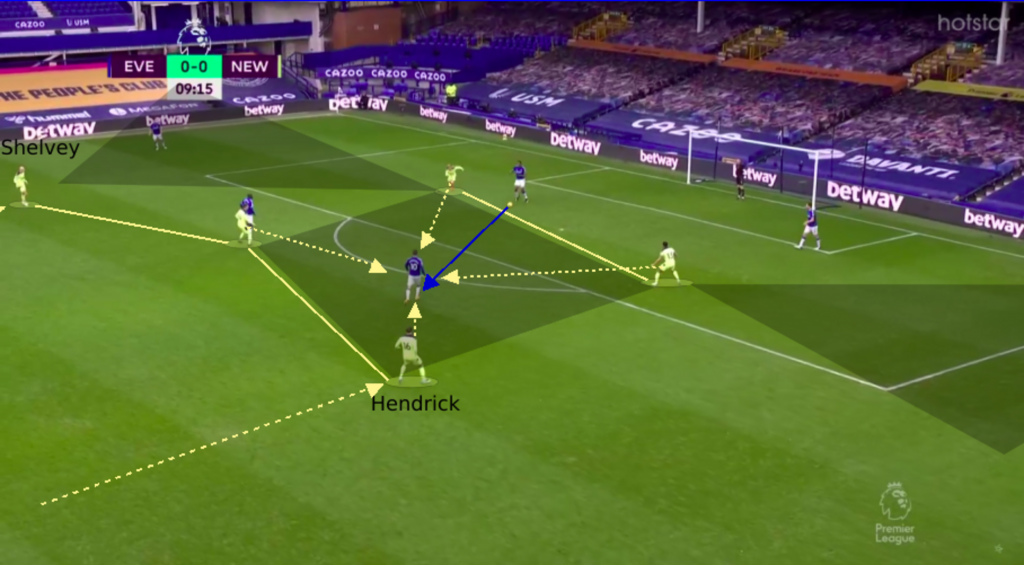 Newcastle United, who had failed to win any of their last 10 matches in all competitions, visited in-form Everton for the Premier League’s matchday 21 opener.

The pressure was on Steve Bruce and his players to deliver, with fans quite vocally disgruntled with their side’s relegation form.

Graeme Jones had joined the coaching staff as an additional assistant prior to this match, and the hope was that his new ideas would turn things around for the Magpies.

They did just that, as Callum Wilson’s second-half brace saw Carlo Ancelotti’s Everton downed in their own backyard. In this analysis, we will take a look at the changes Newcastle made before and during the match that helped them get this huge win: 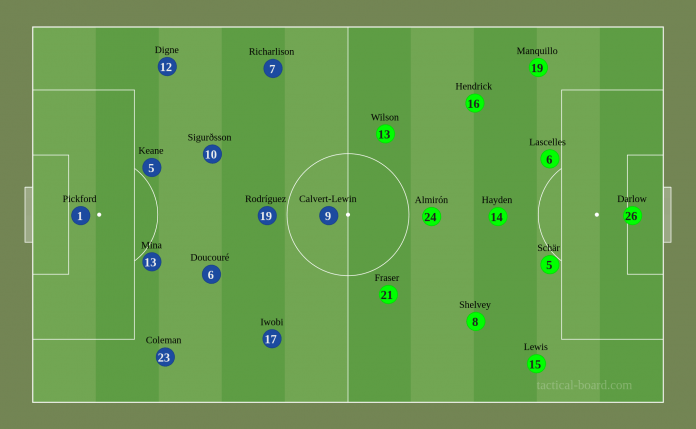 Everton returned to a 4-2-3-1 after a slight deviation against Leicester City, with Jordan Pickford continuing in goal despite a slight mistake that allowed the Foxes to equalise.

Captain Séamus Coleman returned to the back-four, which also included Yerry Mina, Michael Keane and Lucas Digne. Abdoulaye Doucouré partnered Gylfi Sigurðsson in holding midfield, with James Rodríguez restored to the number 10 role. Alex Iwobi and Richarlison were on either side of him, as Dominic Calvert-Lewin led the line.

Newcastle had tried a variety of formations through their losing streak, and their 4-3-1-2 in this match was the latest experiment. Karl Darlow had a defence of Javier Manquillo, Jamaal Lascelles, Fabian Schär and Jamal Lewis in front of him, while the midfield included Issac Hayden, with Jeff Hendrick and Jonjo Shelvey on either side of him.

Miguel Almirón was deployed behind the ex-Bournemouth strike partnership of Callum Wilson and Ryan Fraser.

Newcastle’s pressing problems (and how they were fixed)

Encouragingly, Newcastle showed some positive intent off the ball as they pressed Everton high up the pitch from the start of the match, but there were some issues. 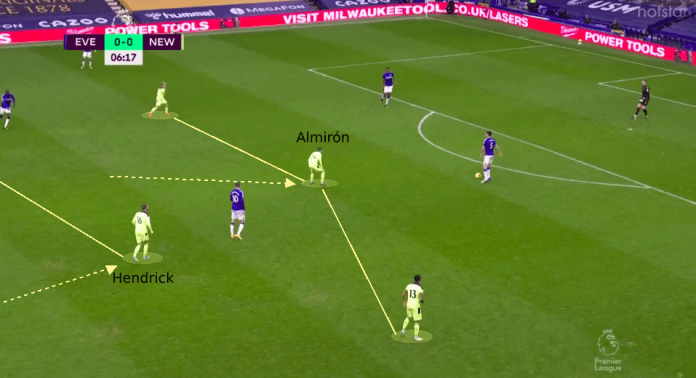 Newcastle United pressed with a 2-3 or 3-2 (depending on Almirón’s position) up front as both Hendrick and Shelvey pushed forward. 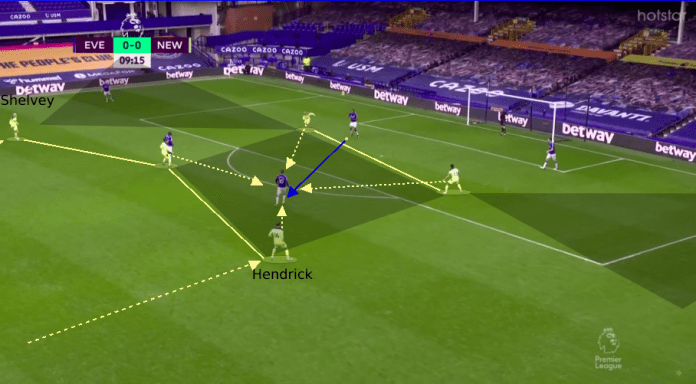 The idea was to force Everton to play through the middle (as the forwards kept the Everton wing-backs in their cover shadow) and then surround the ball from all sides with their numerical advantage in midfield, thus winning possession high up the pitch. 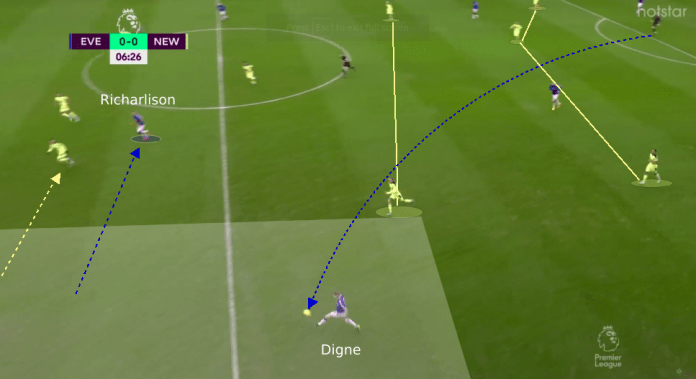 Everton combated this by quite simply not trying to play through the press. They used their attack-minded left-back as an out-ball to play over the Newcastle press, which quite obviously lacked width. Richarlison would tuck inside, pulling Manquillo with him from right-back and creating lots of space on the left for his French full-back to exploit.

Here is how Newcastle fixed their pressing problem in the second half: 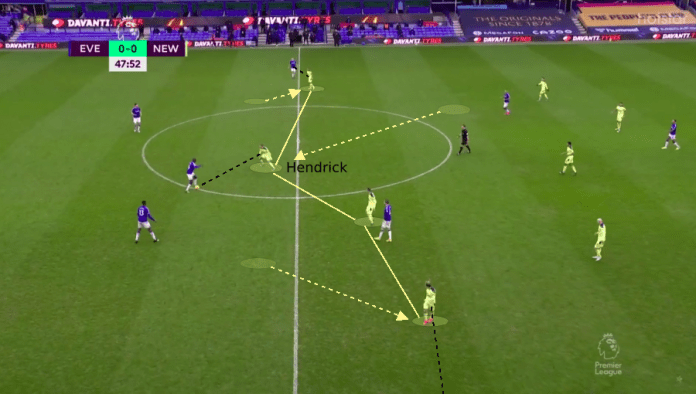 Bruce asked his men to stop laying pressing traps, instead offering a more direct press with four men up front. Hendrick usually led it by chasing the ball, as the two forwards split out wide on either side to keep the Everton full-back in check. Almirón, as he had done in the first half, continued to try and sit on one opposition defensive midfielder. 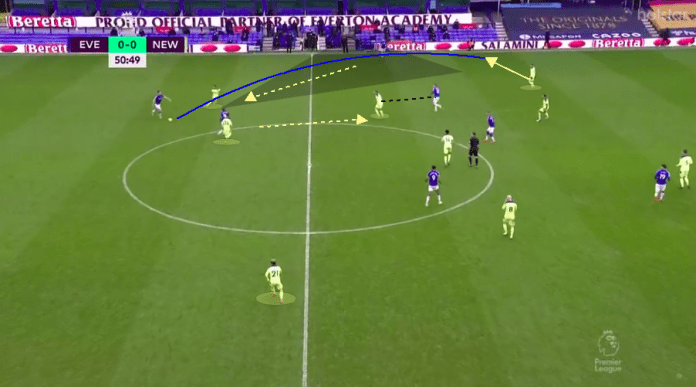 If one of the two forwards tried to press (and it usually was Wilson), they would do so by angling their run in such a way that the full-back remained in their cover shadow. In such a case, Hendrick would drop back into midfield and mark the Everton winger who had drifted inside, freeing up the full-back to prevent a ball being played over the top to the opposition full-back.

Now, let’s take a look at how Newcastle worked with the ball:

With under 40% of the ball, Newcastle were chasing it for most of the match. When eventually finally got it, here is how they worked: 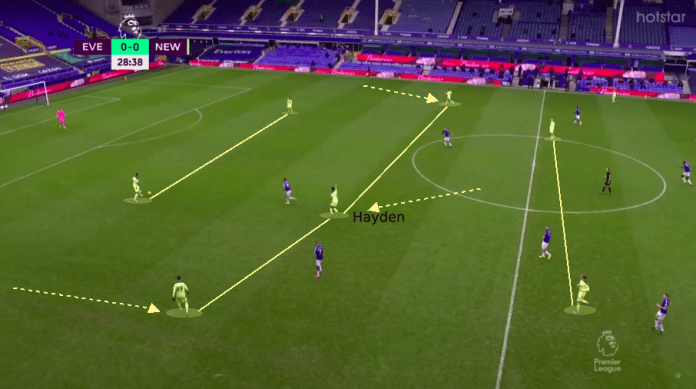 Newcastle didn’t build from the back too often (as 76.2% of Darlow’s passes were launched), but when they did, it was through a 2-3-2, as Hayden dropped in the centre with the two full-backs not going too far up the pitch, while the other two midfielders stayed around the centre circle. 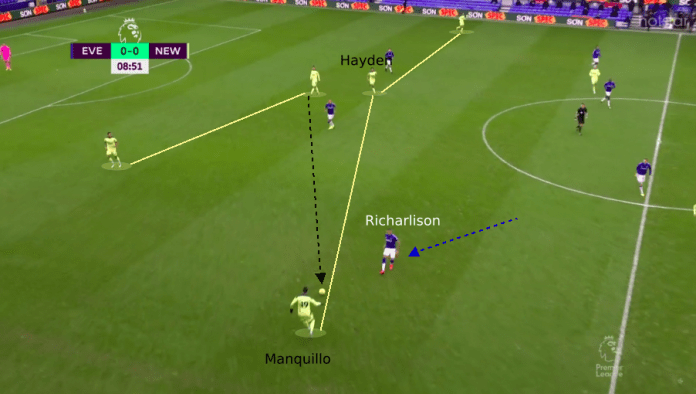 The out-ball was usually available on the Newcastle right, where Richarlsion’s inside position gave Manquillo a decent amount of space. This explains why the Spanish full-back got 61 touches in the match – 14 more than his English counterpart on the left.

From such positions, Manquillo often looked to send a long ball down the channel. Here too, playing down the right was beneficial, since Callum Wilson was on that side and would chase such long balls. The Spanish full-back sent six long balls forward in this match – the most of any Newcastle defender and third-most in the team – finding a teammate with three of them. 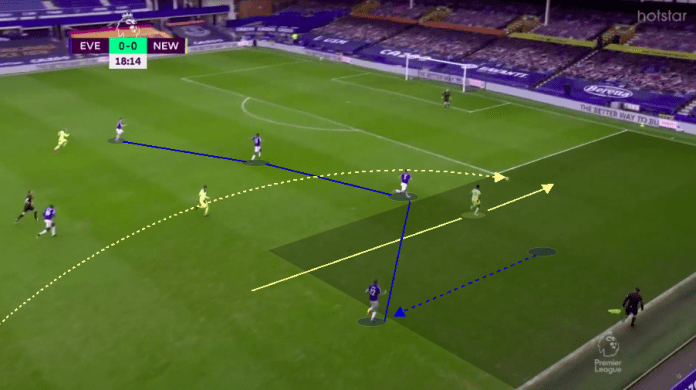 Another advantage of playing long balls into Everton’s left channel was that Digne, their left-back, often went far forward in attack (as discussed previously), so he could be out of position in many cases, leaving a hole for Wilson to run into. The ex-Bournemouth striker was the target of 78 passes – at least 18 more than any other player on the pitch – and he received 40 of them successfully.

Everton under Ancelotti this season have famously been defending strictly zonally from set-pieces, reducing their goals conceded from such situations to 21% from last season’s 27%. However, their system does have its own flaws. 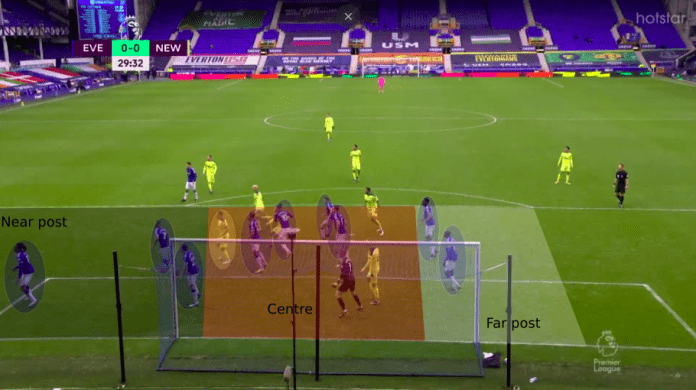 Newcastle’s clear target from dead-ball situations was Callum Wilson, who contested 11 aerial duels in this match – more than any other player on the pitch. While the specifics of Everton’s zonal marking were a lot more complicated, they had three players at the near post, four in the centre and two at far post. 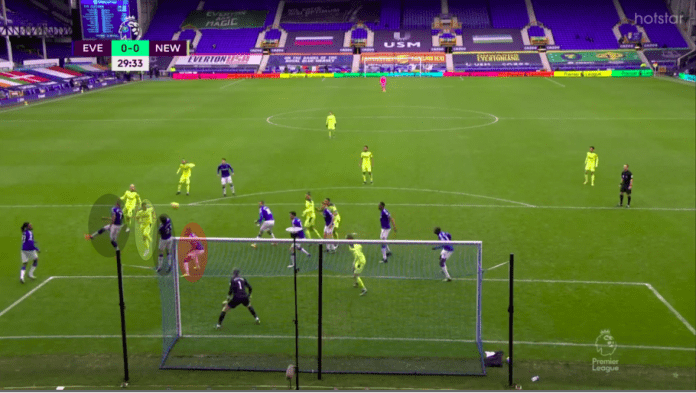 Wilson looked to attack the gap between the centre and near post, which was a bit of a grey area and could cause confusion in the Everton ranks. In the example above, you can see that Wilson’s jump is in between Richarlison, Coleman (who were stationed in the near post region) and Calvert-Lewin (who was placed in the central area). Thus, he gets a free header. 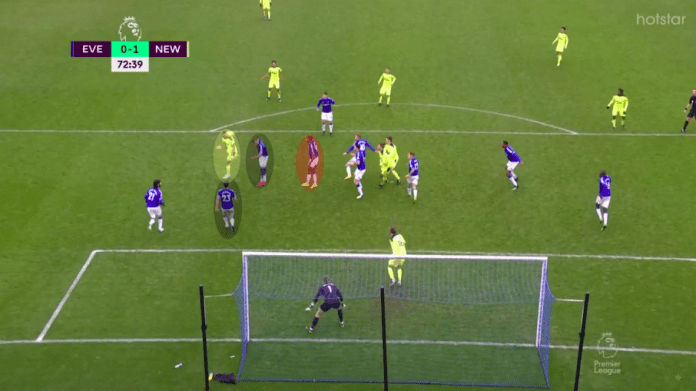 Newcastle’s opener came in this exact manner. Wilson got in between these three players once again (albeit further away from goal), and this time, he was able to guide it home for a change.

Lastly, let’s take a look at how Newcastle defended. 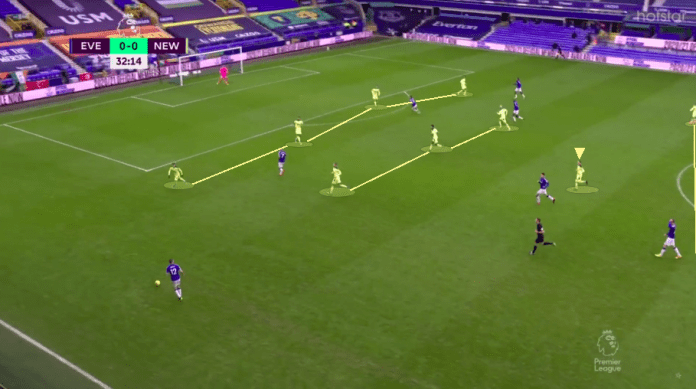 Newcastle did revert to a 4-3-1-2 when defending in their own half, particularly after the half-hour mark in the first half when they realised that their initial pressing system was massively flawed. While their defending was not particularly resolute, they did come away with a clean sheet at the end of the day, and that is all that matters. 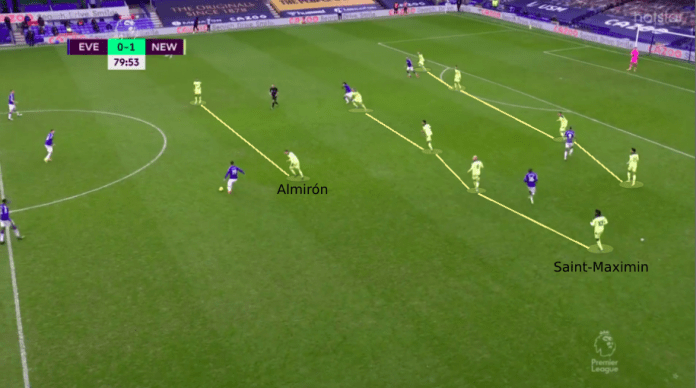 After scoring (and with Allan Saint-Maximin replacing Ryan Fraser), Newcastle switched to the old faithful 4-4-2 in defence, as the substitute dropped into the midfield line. Almirón, meanwhile, joined Wilson up top.

Saint-Maximin’s inclusion also meant that Newcastle had a great counterattacking outlet late on, particularly with Everton throwing everything they had in search of a winner. He was pivotal in their second, as he outpaced an opponent to reach a loose ball in stoppage-time, which set off the counter-attack leading to the goal.

He then sent Lewis on his way up the left flank, with Wilson joining the fun on the far side.

Lewis played a first-time ball across to Wilson, leaving the Coventry City academy graduate alone against the keeper. He did what he does best, and Newcastle sealed a crucial win in the context of their season, and perhaps even future.

Considering the events of the last two months, it feels a bit shocking to say this, but Steve Bruce, Graeme Jones and the rest of the coaching staff got all their decisions right. While their initial tactics (particularly in terms of pressing) were seemingly disastrous, they rectified them very well in the second half, and their set-piece decisions looked good too.

There is no doubt that Everton did have a role to play in their own defeat through their poor performance, but for once, credit must also go to Newcastle. The return of Saint-Maximin is another massive boost for the Magpies, and things are certainly starting to look not-so-gloomy on Tyneside.