With a 1-0 deficit to overturn, Atlético Madrid visited Stamford Bridge to face Thomas Tuchel’s still-undefeated Chelsea in the second leg of their Champions League round of 16 clash.

Coming back from a goal down was not Atlético’s game – they had never won a Champions League tie after losing the first leg.

By contrast, Tuchel’s Chelsea were unbeaten in 12 games, winning eight of those. The German tactician would become the first Chelsea manager to avoid defeat in his first 13 games in charge if he kept this run going, so this was quite an important match from the record-keepers’ point of view too.

The Blues cruised to a 2-0 victory despite a couple of initial scares, as goals from Hakim Ziyech and Emerson helped them advance to the quarter-finals. In this analysis, though, we will focus on their opponents and their unsuccessful return to their old 4-4-2 system.

It must be noted that Los Colchoneros have been utilising a back-four since their derby draw against Real Madrid, but this was the first time they have used it in a two-striker system against a first division side since mid-December.

Knowing that his side would have to draw first blood, Diego Simeone set his side up to press quite high up the pitch. 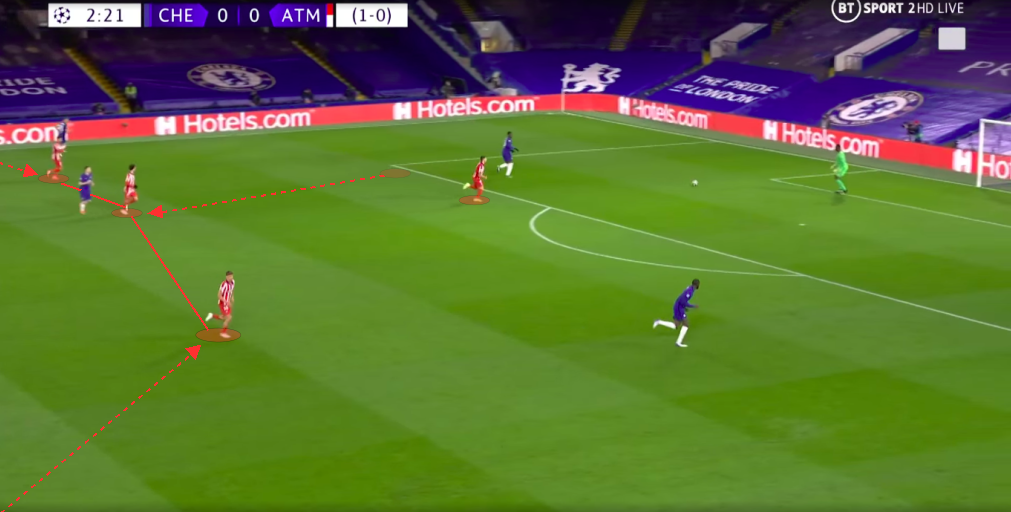 They did so in a 3-1, as João Félix dropped behind Luis Suárez, with the wide midfielders joining him to create a three behind the Uruguayan striker. 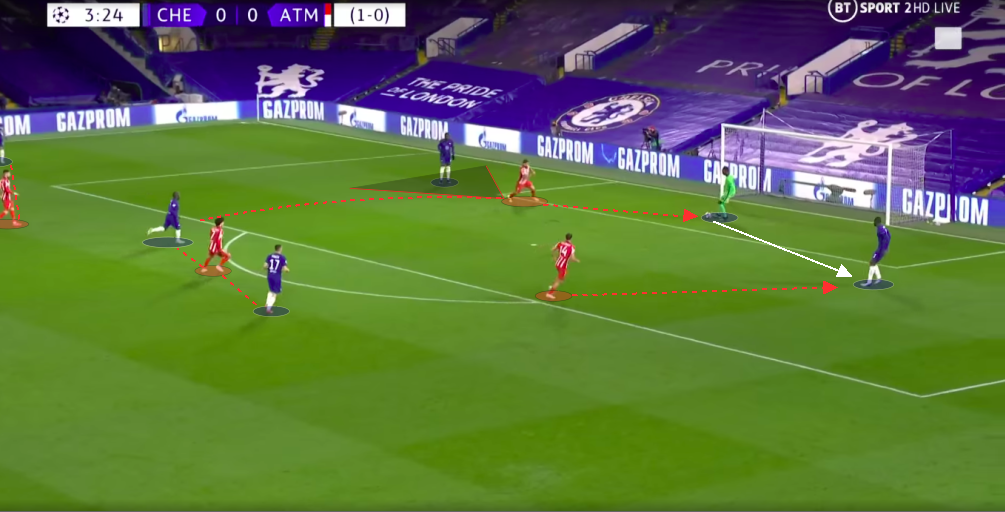 The backpass to Eduoard Mendy was the pressing trigger for Atlético. Suárez would angle his run so that Kurt Zouma would come under his cover shadow, while Yannick Carrasco stayed wide on the left to keep an eye on César Azpilicueta, who drifted wide in Chelsea’s build-ups.

Félix looked to prevent any passes to the holding midfielders, while Marcos Llorente was always ready to press Antonio Rüdiger as he was Mendy’s clearest passing option.

Marcos Alonso (the Chelsea wing-back) would usually come deep to help play the ball out, but he would be closely followed by the Atlético full-back – Kieran Trippier on the right.

Finally, the two Atlético central midfielders looked to mark the two Chelsea inside forwards, as is evident here with Koke and Kai Havertz, who is also dropping deep in this case. Also, notice how Félix is tracking Mateo Kovačić (one of the two Chelsea holding midfielders) wide in this instance.

Unfortunately, though, the Spanish side were not too successful with their pressing, as they never turned the ball over in the attacking third in the first half. This meant that Chelsea played through them quite often. 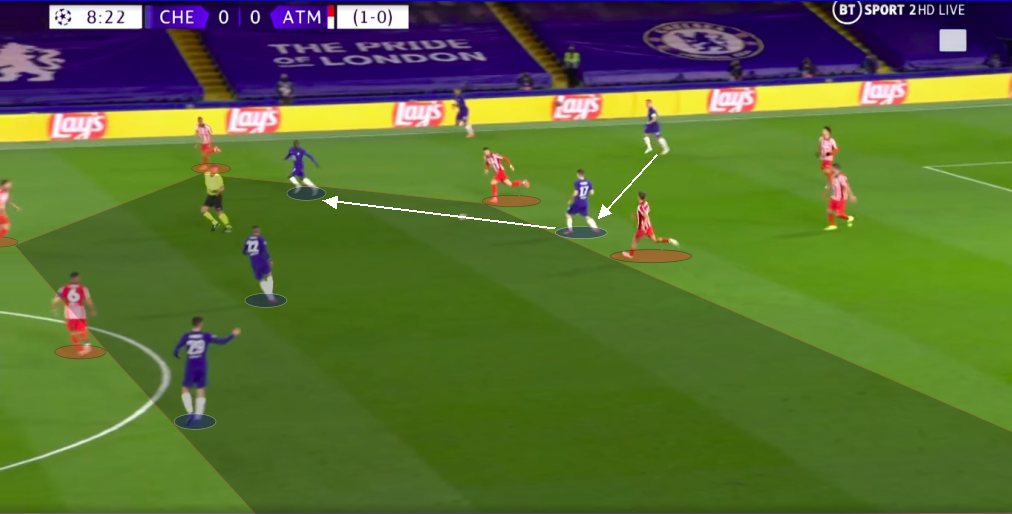 This was largely down to the vast amount of space they left in midfield as their central midfielders marked Chelsea’s inside forwards while the wide midfielders pushed up.

Chelsea had a 6v4 advantage in the build-up (including Mendy), so they could breach Atlético’s press, and once that was done, they had a lot of room to work within the midfield.

Defensive problems and Atlético Madrid are rarely used in one sentence, but as they were chasing the match here, the Spanish side were left exposed at the back – particularly in transition. 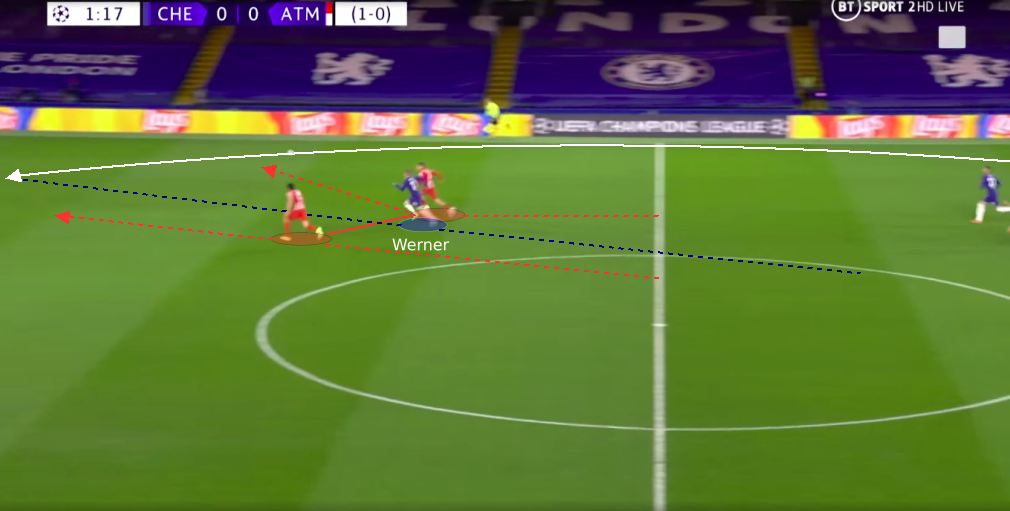 Stefan Savić and José María Giménez had quite a torrid time against Timo Werner in transition. From the opening stages of the match, the German striker caused serious problems as he easily outpaced the two Atlético centre-backs while chasing long balls and clearances.

The Spanish side allowed four shots from counterattacking situations in the first half, including Ziyech’s goal. 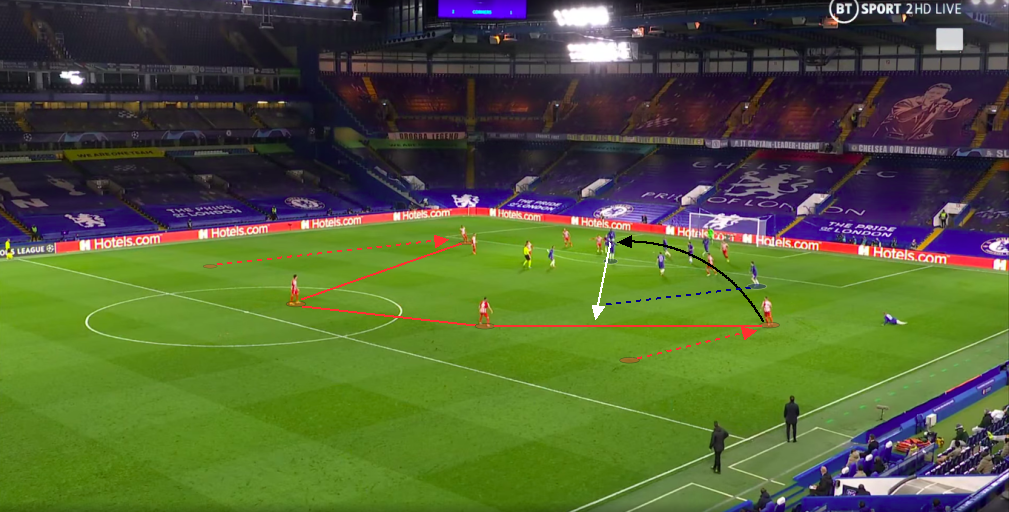 The move started with a failed cross from Trippier in the second phase of a set-piece. By this point, Atlético had some shape as they had two men at the back with the full-backs pushing up.

Havertz got to the loose ball ahead of Trippier, carrying it forward and slipping it to Timo Werner after taking one centre-back out of the game.

The German striker sprinted into a crossing position, with just one defender between him and Hakim Ziyech. He picked the Moroccan international out with a simple low ball across the box, and just like that, it was 1-0 to Chelsea.

Given that they had to score at least once to stay in the competition, you might have been able to understand Atlético Madrid sacrificing a little bit of defensive stability if it helped them in attack.

However, the 36% of possession they had in the first half and just two shots from open play (both of which came from outside the box) tell a different story.

To put Los Colchoneros‘ attacking woes into perspective, their front-four of Suárez, Félix, Llorente and Carrasco accumulated fewer touches (64) than just Havertz and Ziyech (72) in the first half.

They made just 26 forward passes where the target was in the attacking third, and eight of those were chipped balls.

This should not be too surprising, though, as the 4-4-2 is not a formation used when possession is the priority, as the presence of just two men in midfield means that ball progression can be a bit of a challenge.

Instead, its main features are defensive solidity and a favourable structure for pressing, but as we have already seen, Atlético did not get those things working either.

It’s safe to say that Simeone got his tactics wrong, effectively handing the match away to Chelsea and Tuchel.

In need of a minimum of two goals, the Argentine manager made a tactical switch at half-time as he brought Renan Lodi off for Mario Hermoso, switching to a 3-5-2. While this was slightly more successful than the 4-4-2, it did not yield goals, and a late red card sealed Atlético Madrid’s fate.

As for Chelsea, Tuchel returned to his favoured 3-4-2-1 after a less-than-successful experiment against Leeds United, but his men did not have to do anything overly special to get past Atlético.

There were some encouraging performances, though, as Werner looked quite good as he got an assist while Ziyech’s second Champions League goal for Chelsea marked one of his better performances in Blue.

With nine wins and two draws from 13 games and a goal difference of +13 (with just two conceded), Thomas Tuchel’s Chelsea are becoming a force to be reckoned with.

The Premier League is well out of reach, but the Blues should undoubtedly be looking towards the FA Cup and perhaps even Champions League for a shot at some silverware this season.