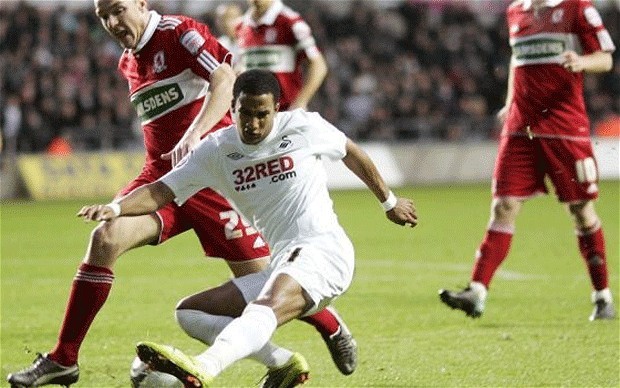 Anointing a youngster “future England regular” is an exercise both in optimism and presumption. There have been several recent nominees for the position future England star – from Jermaine Defoe, through Jack Wilshere, Andy Carroll and even Adam Johnson. Each has had their sparkly moments in the Three Lions’ shirt and as Fabio Capello begins to assemble his squad for Euro 2012, certain names have been categorized already: Rooney – definitely, Lampard – probably, Naughton – perhaps, Bothroyd – unlikely, Scholes – I wish and Nugent – never in a million years.

Here’s one more suggestion for that “perhaps” category, a bolter from the field: Scott Sinclair, of Swansea City. In fact, it’s not too long a bow to draw to suggest he should have been considered for a call-up to the current England training camp as they prepare to face Switzerland. Take note he probably doesn’t deserve a place in the team just yet, but with his Championship form, Chelsea pedigree and blistering pace down the left of midfield he – and England – can only benefit from his exposure to top level competition.

The former Chelsea man isn’t the best English left winger in the country. He may not even make the top seven. But what he does offer is an abundance of pace, youth, finishing skills and enthusiasm. In International football, speed is a crucial part of a team’s gameplan and something- Theo Walcott’s fragile body apart – that the Three Lions lack. He may develop into a gamebreaker (or not) but to include him at this juncture would only aid England’s process of ensuring the most appropriate talent makes their representative team.

Understanding that during their past few internationals England have trotted out James Milner, Stewart Downing and Ashley Young as regular left midfielders – Milner the incumbent and deserving Villa pair rewarded for good Premiership form. Other wide players like Matt Jarvis and Johnson round out the England squad – both of good, but not world-class standard. It’s hard to believe that Sinclair is that far removed from that second level, especially when viewed on a purely physical basis. Man City’s Johnson went from the Championship with Middlesbrough to the national setup within months of his acquisition by the Citizens and appears as if he has an England future. Sinclair could do the same.

The argument for calling up the Swans’ star is simple: why not? What has England got to lose? They include an upcoming youngster, give him exposure to training with top-class talent and play him only if they’re confident he won’t let the side down. If he’s not good enough, so be it – he can easily not be included in their matchday team. His Championship background shouldn’t scare Capello – the Italian called up Jay Bothroyd earlier this season and Sinclair’s record (27 goals in all competitions this year) is comparable to, if not better than, that of the former Cardiff City striker.  He’s already in the system as well as a regular for Stuart Pearce’s U-21 mob.

As any four-year old is frustratingly aware, the simple rebuttal to an argument of “Why not?” is “Why?”. England have a bevy of wide players with better and more established pedigrees – ranging from Milner to Jarvis. To represent one’s country should be earned and it’s questionable that Sinclair has done so. Often, managers look for two years of performances before rewarding players with higher honours.  But really, does training with the National squad have the same weight of meaning? Two years ago, Joe Lewis of Peterborough was called into the England training camp while Jordan Henderson’s tremendous start to last season got him an England cap, after which his form tailed away. To look back on those two’s call-ups is to ask if they truly deserved them also.

Scott Sinclair will find out later this year when Swansea City begin their Premiership campaign if he’s quite the player he seems. But Fabio Capello’s watching brief shouldn’t just include obtaining results but developing the national team for the future as well – and Scott Sinclair’s definitely one to watch. It appears he has missed a trick by disregarding the young Swan.

For more commentary and analysis, shoot across to  Matthew Wood’s blog, Balanced Sports. You can also follow him on Twitter – @balanced_sports.