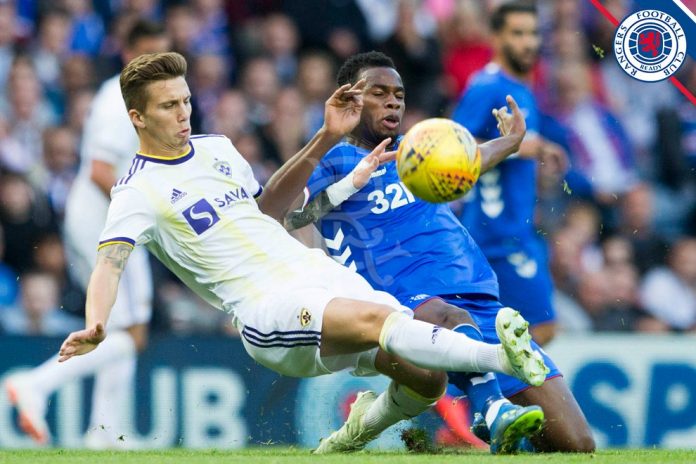 Glasgow Rangers boss Steven Gerrard was full of praise for Lassana Coulibaly for his excellent performance during the Gers’ Europa League win against Maribor on Thursday night at Ibrox.

The 22-year-old joined Rangers on loan from Angers, and has already settled in at his new club nicely. He has made a fine start to his career at his new club, drawing praises from his manager and the fans.

He was superb in the midfield role for the Gers, and helped the club defeat Maribor 3-1 in the first leg of the Europa League clash on Thursday.

Not only did he marshall the midfield with great aplomb, the young midfielder also got his name on the scoresheet as he scored the final goal of the match.

Gerrard has hailed him as a ‘machine’ and says he is the type of player the club needed as a midfield enforcer.

“He (Lassana) is a machine, he’s exactly what this football club needed in terms of that enforcer in the middle of the park,” said Gerrard, as quoted by STV News.

“He enjoys getting after people, biting into tackles and doing the ugly side of the game. He loves it and is only going to get better, there is more to come.”

Coulibaly is already proving to be an inspired signing from Rangers, and Gerrard expects the young midfielder to only get better as the season progresses. He has provided energy and spark to the Rangers midfield and is set to play a crucial role for Gerrard’s side.

Rangers look well set to qualify for the next round of the Europa League after taking a healthy lead ahead of their second leg clash in Slovenia next week.