Netherlands and Spain are similar because not only that neither have ever been crowned a world champion but also because time and time again have been related to beautiful football and exceptional passing. But as far as the World Cup is concerned, Netherlands have been in the final twice before. Then again, Germany has a much more lustrous World Cup background but Spain went past them.

Man-to-man, the Dutch and the Spaniards are strong and stronger in different positions. A few examples, if you may:

Goalie – Maarten Stekelenburg is definitely the ‘weak link’ here and I bet even the most patriotic Dutch fans would agree here. Iker Casillas is one of the top two and he has proven just that time and time again. Casillas has conceded two goals and kept four cleensheets as compared to the Dutchman’s five conceded and two goals.

Stekelenburg has failed to save two out of two penalties whereas Iker saved the single penalty he faced. Also, Casillas has a better saves to shots ratio as well (85% to 75%).

Lead Defender – Johnny Heitinga and Carles Puyol are the lead defenders for the two nations. Both played six games and Heitinga was responsible for 12 more clearances, blocks and interceptions. He’s much more consistent in winning tackles (80% to 63%) as well but Puyol has made his mark on aerial duels (67% to 58%) and passing accuracy (91% to 87%).

Puyol scored the only goal in the semifinal against Germany as well.

Central Midfielder – Mark van Bommel is not as eager to score as his Spanish counterpart, Xabi Alonso, but he edges past him in passing accuracy (89% to 88%) and seems quite more eager to win the ball than Alonso (31 tackles attempted to 18). Almost Half of those attempted tackles were fouls for both (14 fouls for van Bommel and 9 for Alonso).

Playmakers – The strength of both of the teams’ attack. They vivid, accurate and deadly playmakers. Wesley Sneijder might be the joint top scorer of the tournament with Xavi not finding the net even once, but Xavi is strictly playing as a playmaker, creating 14 more chances than the Inter Milan man and being more accurate with his passing (90% to 84%). Both legends of the future have one assist each.

Forward – Coming back from injury, Arjen Robben has been instrumental in the opponent territory but David Villa has meant business. Five goals from him out of the seven Spain have scored in this World Cup. Robben has a higher shooting accuracy (67% to 59%), higher chance conversion (33% to 23%) and even a higher dribble completion (45% to 35%) but he has also played two lesser matches and scored three lesser goals. 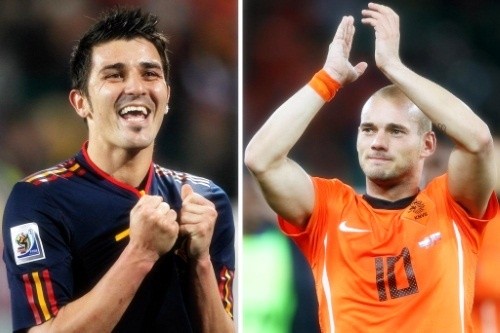 Hmm… That’s about it for the man-to-man comparisons from my side. Now let me try something out:

Ok, I know this is stupid but here it goes anyways: Within the first ten minutes of the kickoff, Spain will score the first goal of the game and their first ever goal in a World Cup final. Andres Iniesta will cut in from the left to provide an assist to most probably a midfielder – someone like Xabi Alonso.

Before the half hour mark, the Dutch will strike back with their crafty footwork on and off the ball. Sending either Wesley Sneijder or Arjen Robben into the Dutch history books.

Third goal will come in the extra time of the first half when David Villa will slot one pass Stekelenburg. Equalling his tally with Sneijder in the race for the Golden Boot.

Netherlands will strike back around ten minutes in to the start of the second half with Sergio Ramos either making a defensive error or getting caught out of position – the latter is more likely. Probably, probably Dirk Kuyt will be there to take advantage of it because Robin van Persie will be offside.

Finally, after the 60 minute mark (possibly into the 70’s), Xavi’s corner will be converted in to David Villa’s seventh of the tournament. That will be all goalscoring action in the game which will subsequently end 3-2 in Spain’s favor.

Bookings – Both sides will earn the yellow cards while fighting for the ultimate glory. Mark van Bommel for rough tackles, Robben for swimming on a football field, Xavi for multiple taps on the Dutch and Sergio Ramos for trying too hard to make up for what he has given away already. Though I wouldn’t be surprised if van Bommel sees a red.

Don’t be shocked if I’m wrong, after all I’m no octopus!

Out of the quarterfinalists, Netherlands have been the most accurate attack force when it came to shooting (58%) and they also managed to convert almost 18% of their chances – a percentage that is only second to the Germany’s almost 20%.