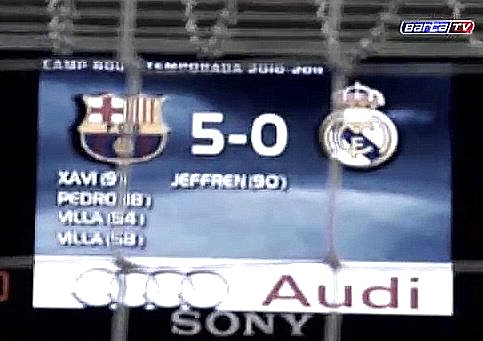 Out of the top leagues in Europe (Spain, England, Italy, Germany and France), Barcelona have scored the most goals and maintained highest goals per game ratio. They have scored 67 goals in their 21 La Liga games so far this season – an average of 3.19 goals per game. Barca have only conceded 11 goals in their matches; roughly one goal every two games.

Over in England, English Premier League leaders Manchester United have scored 54 goals in 24 games and conceded 22 at 2.25 goals a game. United’s Bulgarian striker has found his form this season and finds himself on top of the 2010/2011 Premier League top scorers’ sheet with 19 goals. That is great but that is also two shy of Barca’s top scorer, Lionel Messi.

In Italy, AC Milan are the Serie A leaders and they have only managed 39 goals while conceding 18 in 23 games at 1.66 goals per game. Inter Milan have also scored 39 at 1.77 goals per game are currently at the third position with one game in hand – they have conceded 24.

It seems like everything has been turned on its head in Germany, where Borussia Dortmund lead the pack after 20 games. Dortmund are also the top scorers with 46 goals at 2.3 goals per game and they have conceded 12. Bayern Munich are a staggering 14 points behind the Borussians and have scored 40 goals at 2 goals a game.

Whereas in France after 21 games, Lille top the Ligue 1 charts. They have scored 39 goals at 1.86 goals per game and conceded 21.