With the Old Firm derby approaching on Sunday, Celtic took advantage of a postponment at McDiarmid Park between St Johnstone and Rangers by defeating fourth place Dundee United at Celtic Park. In Perth, referee Mike Tumilty made the decision to call off the early kick-off, only an hour before the game was meant to be played, forcing thousands of fans into pointless journeys. Rangers manager Walter Smith said “It’s disappointing, but in fairness it’s the right decision”.

Tony Mowbray’s Celtic now had the incentive to cut the gap at the top of the SPL and had to deal with a number of defensive injury worries. 19-year old Thomas Rogne from Norway made his first Celtic start alongside English youngster Josh Thompson in the heart of the defence. The only goal for Celtic came after 20 minutes when Robbie Keane was slipped through on goal to slot home his first Celtic goal at his new home. To be fair, Celtic dominated the majority of this game and United goalkeeper Dusan Pernis made some excellent saves to deny Mowbray’s men but they held on to set up an enthralling clash with rivals Rangers next weekend. A game which I will be previewing throughout the week here on Soccerlens. 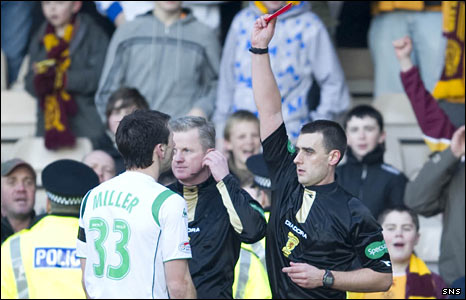 Miller’s sending off killed game, there was only one winner from then onwards

With the Rangers game postponed, I decided to take in the Motherwell v Hibs match at Fir Park during the afternoon and there were a few pitch problems here aswell. To put it kindly, the pitch was an absolute disgrace. You could probably find school football pitches in better condition than Fir Park, as there were huge crators scattered around the pitch. The first-half was starved of any real cutting edge chances but the game changed when Liam Miller was sent off after a reckless challenge on Jim O’Brien which sparked a furious reaction from his Motherwell team-mates and fans. From where I was sitting, it didn’t look like a red-card and John Hughes said “Scottish Football is in a sorry state if that is a red card”. The winner came late in the second-half when Jamie Murphy pounced on John Sutton’s knockdown to stab the ball across goal and into the net. 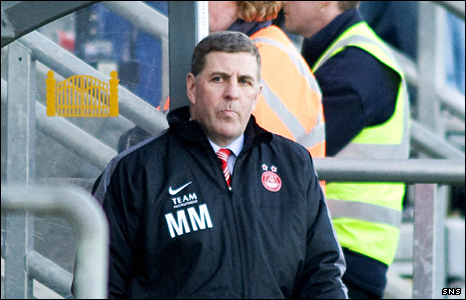 Mark McGhee’s week at Pittdorie got even worse when his Aberdeen’s side were brushed aside by Falkirk. The Bairns’ new manager Steven Pressley secured his first home win to keep Falkirk’s survival hopes alive. Aberdeen took the lead when Charlie Mulgrew dispatched a trademark free-kick after just 5 minutes. Falkirk’s Portuguese midfielder Pedro Moutinho fought back when he stabbed home Showunmi’s cross. On 42 minutes, Darren Barr fired Falkirk into the lead with a close-range header from the back post. Enoch Showumi got his first goal at the Falkirk Stadium when he fired home an excellent shot into the net after some neat work by Ryan Flynn. Its everything to play for now at the bottom of the SPL with 9 points seperating Falkirk, Hamilton, St Mirren, Kilmarnock, St Johnstone and Aberdeen.

At Rugby Park, St Mirren battled to leave Ayrshire with a draw after a late Billy Mehmet strike. The home side took the lead after 33 minutes when Chris Maguire fired home from inside the box. The on-loan Aberdeen striker has been on red-hot form for Calderwood’s Kilmarnock. The Buddies fought for another 49 minutes before getting an equaliser when Billy Mehmet fired home a cracking half-volley from 35 yards. 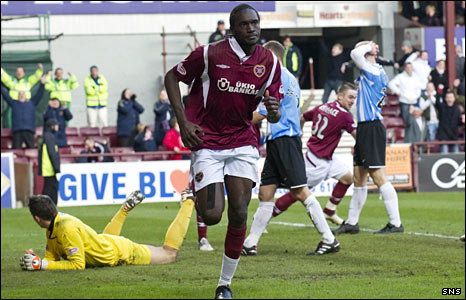 In Sunday’s only game, Hearts picked up back-to-back wins in the SPL for the first time since December with a 2-0 home win against Hamilton Accies. Goals from David Obua and David Templeton were enough for Jim Jefferies’ side to win the game.