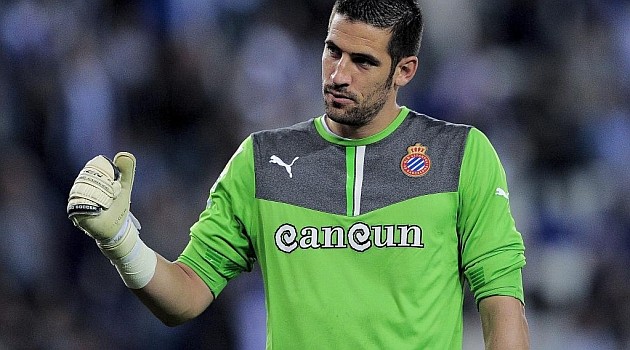 Premier League Giants Arsenal and Manchester United have been handed a massive boost from Espanyol Goalkeeper Kiko Casilla, the Spaniard who squashed claims of joining Real Madrid in the summer.

Casilla has just a year left in contract as both Manchester United and Arsenal are monitoring the situation. The Spaniard is also on Real Madrid’s wishlist but has strongly refuted suggestions linking him in a move to the Bernebeu.

Arsenal are reportedly interested in bringing the Spaniard to the Emirates as the Gunners have goalkeeping concerns of their own. While Lukasz Fabianski is on his way out of London in the summer, Emiliano Viviano’s loan deal from Italian side Palermo is coming to an end, hence the Gunners need a long term solution.

Casilla however welcomed interest from both Manchester United and Italian Giants AC Milan.

His agent Jose Alberto Salas has admitted that it is ‘an honour’ for his client to be linked with a move to Milan.

“At the moment there is no news about the future,” Salas told Italian daily Calcio Mercato. “It is still too early to say what will happen. I have no news to tell you about Milan, or Manchester United for that matter.

If Milan were to call it would be an honour and of course we’d speak to them. Milan are a historic club, a great team. Everything is possible. Serie A is one of the best Leagues in the world. I have a very good opinion of Italy. At the moment we are talking only with Espanyol, but there are some differences between us. If there’s no renewal then he may leave in the summer – that all depends on what offers we get though.”

The Spaniard is evaluated  £3m by Transfermarkt.