Vicente Del Bosque‘s possession-monopolising (though repeatedly over-indulgent) Spanish outfit will take on Bert Van Marwijk‘s often studious (but, nevertheless, unbeaten) Netherlands side in Sunday’s showpiece finale, with both countries bidding to be crowned champions of the 2010 FIFA World Cup.

What follows is a game-by-game look at how La Furia Roja made it through to the very last round of the South African tournament, to put themselves within a games-breadth of winning their first ever World Cup title.

Read The Netherland’s Route To The World Cup Final

Spain were drawn in Group H along with Switzerland, Chile and Honduras, and although Chile were tagged by many neutrals as potential dark horses, it was generally accepted that they would have no trouble in reaching the second phase – but an inauspicious start left a lot of people doubting their Del Bosque’s side’s stock.

Despite enjoying over 66% of the total possession, the reigning European champions got their World Cup campaign off to a nightmare start after succumbing to a scrambled goal from Saint-Etienne midfielder Gelson Fernandes (only his second ever international goal).

The Spaniard’s were obviously a step-up in class from their opponents but their lack of a cutting edge meant that, for all the slick interplay and close control, they came away from their first fixture with absolutely nothing to show for it. 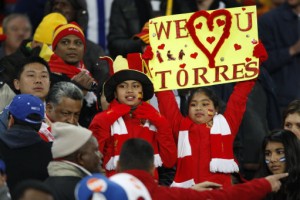 Spain’s most prominent goal-threat David Villa burst into life during their second group stage tie with a two-goal display that had many prematurely earmarking him for the Golden Boot award.

Villa opened the scoring with a sublime curling effort, after cutting in from the left and unleashing a shot that flew past the outstretched Noel Valladeres and into the far corner.

Villa then doubled his tally after half-time when his deflected effort looped up and over the stranded Valladeres and into the back of the net.

Ten minutes later, the Barcelona striker was then presented with a glorious opportunity to cap off his hat-trick – but instead planted his gutsy spot-kick wide of the post.

Spain again created a hatful of chances to comprehensively see of the seemingly awe-struck Honduran side, but their profligacy in front of goal dictated that the deceptively slim two-goal margin should remain.

Two first-half goals from David Villa and fit-again Andres Iniesta respectively were enough to see La Furia Roja past La Roja, but Del Bosque’s side were once again far from convincing.

Spain needed a win to ensure their progression to the last 16 but Chile, although being a man down for the majority of the game, put them under real pressure – not least when Rodrigo Millar hooked a goal in via Carles Puyol‘s knee to pull one back for the South American’s, just two minutes after the restart.

Spain were forced to endure some very nervy moments, but eventually saw out the remainder of the game unscathed – booking themselves an enticing second-round clash with Iberian rivals Portugal as a result.

Once again Spain bossed the possession during the first-half, endlessly looking to create thoroughfares for themselves by pulling the Portuguese defence out of position with slick, short passing – but Carlos Queiroz’s side, despite not seeing as much of the ball, created just as many chances to seize the lead.

Del Bosque’s men also had their fair share of opportunities to nudge in front, David Villa stinging Eduardo’s fingertips with three near-identical shots and Fernando Torres going close on a couple of occasions before fading badly as the game progressed.

Spain pressed determinedly in the second-half, and finally got the goal their hard work deserved when David Villa (who else?), after seeing his initial effort saved, clipped the rebound in off the underside of the crossbar.

A minute from time, Portugal were reduced to ten men, when Ricardo Costa saw red for an innocuous off-the-ball ‘clash’ with left-back Joan Capdevila – but the incident was so late in the game that it had little chance to affect the result in any way. 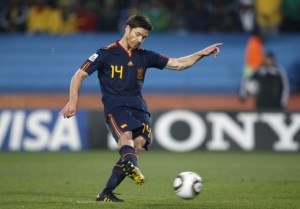 Remember, the game with all the penalties? It was another goal from the boot of David Villa (his fifth of the tournament) that once again saw Spain through to the semi-finals, but the paltry final scoreline failed to accurately reflect the drama which had unfolded during the game.

Three unsuccessful penalties (one for Paraguay, two for Spain) in four second-half minutes provided the thrills and spills in what was a largely dour encounter overall, before substitute Pedro cracked an effort against the post which fell kindly for Villa to mop up, though his effort struck both uprights on the way as well.

Spain continued to threaten on the break, but a second goal would have been harsh on a Paraguay side that had defended so resolutely throughout the World Cup – conceding only twice during their five-game stint in South Africa.

Spain’s third 1-0 win in succession was enough to book them a final showdown with the Netherlands, but strangely the goal didn’t come from hot-shot talisman David Villa this time – it actually came about through a much more unlikely source.

Del Bosque’s side dominated with their ‘ticky-tacky’ passing game but once again created little, meaning that we were treated to a largely disappointing display from two teams with burgeoning reputations for dazzling, technical football.

The stalemate was broken in the 73rd minute, when no-frills defender Carles Puyol rose to meet a no-frills corner from Xavi and power a no-frills header past Manuel Neuer – in a decidedly ‘un-Spanish’ manner.

Germany had thrilled and delighted during the previous stages of the World Cup, with three separate four-goal finishes to their name, but they we reduced to stupefied hero-worship for large periods of the game – as the Spaniards shut down the tie with their expert ball retention.

After six games filled to bursting with moments of absolute footballing perfection and mind-meltingly frustrating over-elaboration, the Spanish will now meet the Netherlands in the 2010 FIFA World Cup final.