Gaston Ramirez to quit set to quit Southampton for Serie A Giants this summer as a replacement for MLS bound Kaka, the player’s agent revealed.

The 23 year old signed for the Saints in the summer of 2012 from Bologna for £13.4m but has failed to guarantee a starting spot in Maurico Pochettino’s impressive side. 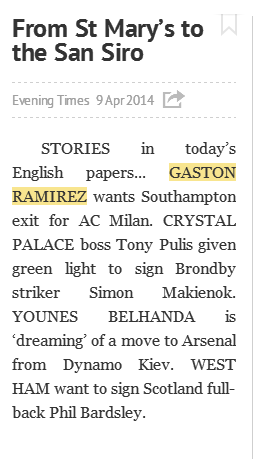 The Uruguayan international has one goal in 17 Premier League appearances this season and a return to the Serie A is certainly on the cards. His agent Pablo Betancourt has been heard saying,

“Has it been a season to forget? Absolutely yes. He hardly ever plays, yet two summers ago the club made an important investment to buy him. Today you cannot say he’s important for Southampton, seeing as he always starts from the bench.”

It is also reported that Milan are preparing a £12.5m bid to bring Ramirez to the San Siro in the summer. The Rossoneri have had a dismal campaign and currently lie eleventh in the Serie A standings, a mammoth 39 points behind leaders Juventus, and are set to miss out on Champions League football next season.

Newly appointed manager and club Legend Clarence Seedorf has brought some stability since his appointment and wants an attacking midfielder who can pull the strings in the middle of the park. Ramirez with his deadly finishing, dazzling dynamism on the ball and incisive passing seems to perfectly fit the bill.

His agent Betancourt continued, ” It would be an important opportunity for him. We are trying to understand which team can make the right offer to Saints. Ramirez played very well in Italy and many Serie A clubs remember him positively.”

Fiorentina were also interested in the Uruguayan in the January transfer window but interests have died down since then.