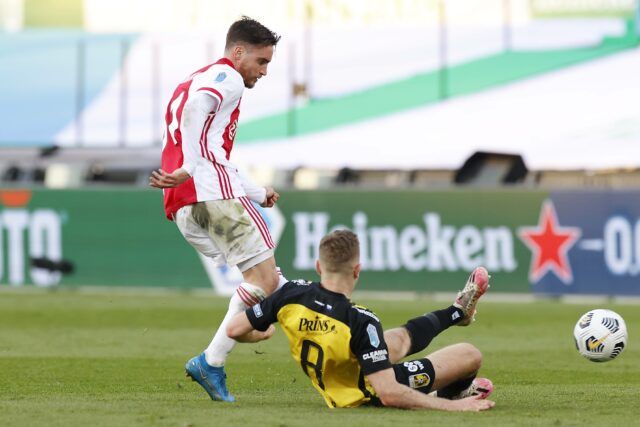 The Dutch giants have once again asserted their domestic dominance by securing a league and cup double.

However, due to the pandemic, clubs worldwide are struggling financially, and Ajax are no exception to such a situation.

Ajax have sold the likes of Hakim Ziyech, Matthijs de Ligt and Frenkie De Jong in recent years, and Overmars has hinted that two more first-team stars could leave this summer.

Speaking to Dutch magazine Voetbal International (via the Express), Overmars said: “A departure for Nicolas Tagliafico and David Neres would not be illogical.”

Leeds United should take a keen interest if Tagliafico is made available.

Phil Hay, the Athletic journalist, claimed last month that the Whites could be looking to sign three to five players this summer.

Signing a defensive midfielder, mainly as a cover for Kalvin Phillips is their top priority, but they could also add a new left-back to their ranks.

Ezgjan Alioski is almost certain to leave the club this summer on a free transfer. The club have attempted to keep him, but Marcelo Bielsa failed to provide a positive update when asked about the player’s contract situation.

Stuart Dallas remains another option for the Whites, but signing a new left-back is essential this summer.

The 28-cap Argentine international joined Ajax in 2017 and has established himself as a key player for the club. He is known for his pace and attacking play from deep.

In theory, the 28-year-old should be perfect for Bielsa’s side. He would bring a wealth of experience with him and is entering the prime phase of his career.