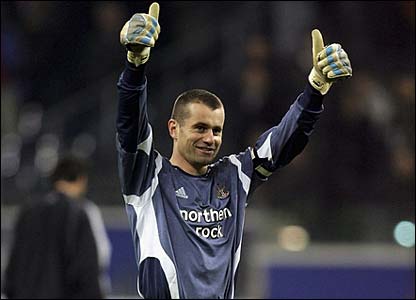 Newcastle United fans are dreaming of how life will be at Saint James’ Park under the prospective new owners, and many of them are hoping the club can become the next Manchester City.

Saudi Arabia’s Public Investment Fund are expected to complete a £300 million takeover before the end of the month, and a massive squad overhaul has been tipped to take place afterwards.

However, Financial Fair Play will prevent would-be Newcastle owners from spending with reckless abandon in the coming transfer windows, with Sky Sports claiming that immediate mega squad investments aren’t on the cards despite reports regularly linking the club with big names.

Former Toons goalkeeper Shay Given has a brilliant transfer plan that could turn the club into a Man. City in the long-run, though, detailing how Newcastle can eventually get back challenging at the top of the league.

“It’s possibly harder now compared to City with the financial fair play. I think they’ve tightened up since Man City have come in. But Newcastle have a decent team as it is. If they add four, five, six really good players to that they could be in the top six or seven. Then if they add another six or seven players, they can get up there eventually,” Given told The Sun.

“Newcastle already have the stadium. The city would be buzzing and the fans would be queueing out the gate to get in. It’s a small world now with planes, trains and helicopters. It’s not that difficult to get to Newcastle.

“Once you get one or two big names in the door, then there’s a few more thinking, ‘If he’s joining, I want to go as well’. It’s exciting hearing about some of the players maybe coming to the club. Gareth Bale got a mention the other day, Kalidou Koulibaly too.”

Newcastle have already proven they can challenge for a top-10 finish since returning to the top-flight, and adding a couple of top players will definitely improve their fortunes.

A proven striker is top of their plans this summer with Joelinton struggling, and they could do with world-class centre-backs and wingers too.