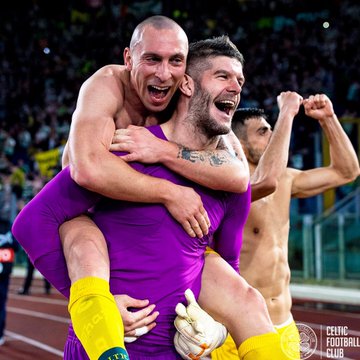 Celtic produced yet another special performance on a big European night as they secured their passage to the Europa league last 32 with two games to spare.

The Bhoys, who won against Lazio at Parkhead, earned a dramatic 2-1 victory in Italy, with Olivier Ntcham scoring a 95th-minute winner to send Celtic fans across the world into delirium.

Former Celtic players – Shay Given and John Hartson – took to social networking site Twitter to express their reactions after the game.

Given, who played his youth career at Celtic, said it was an ‘amazing result’. He tweeted:

Wow the Bhoys @CelticFC have only gone to @OfficialSSLazio and won the game, amazing result 👏👏 ☘️

Hartson, the former Celtic striker and a club hero, was excited to see Neil Lennon’s side reaching the knockout stages.

Celtic were put into backfoot when Ciro Immobile gave Lazio the lead as early as in the seventh minute.

The Bhoys kept their focus intact and got the equaliser through James Forrest who scored his 11th goal of the season just before the break.