Serie A Weekly: Inter soar and Juventus finally get going 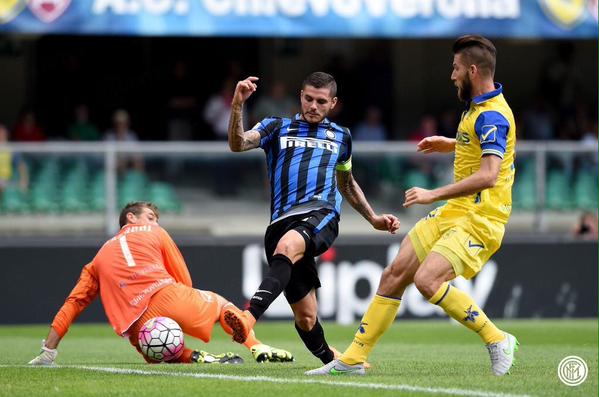 Inter Milan continued their impressive start to the new campaign with a slender 1-0 victory over Chievo in Verona. Elsewhere, Lazio were humiliated 5-0 by Napoli, Fiorentina moved to top three with a victory over Carpi and Carlos Bacca inspired Milan to a 3-2 win over Palermo. 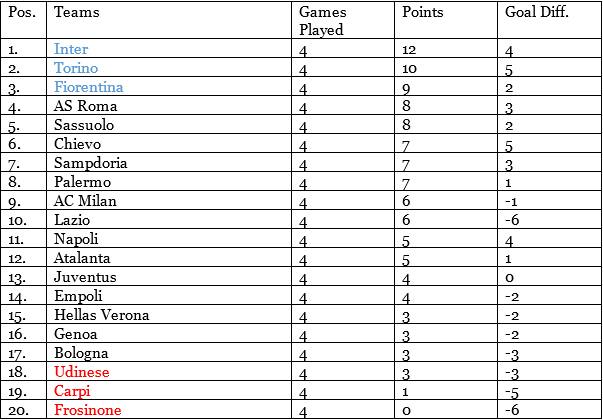 Serie A: Top Scorers after Week 4

Mauri Icardi’s first half strike was enough to earn full three points for the Nerazzurri. However, the visitors were lucky to return will maximum points, as they were largely on the back foot for most part of the game. Had Chievo taken their chances, the result could have been different.

Mauro Icardi has played a hand in 8 Inter’s Serie A goals (5 scored, 3 assisted) in his last 6 apps in the league (via Opta).

Chievo were unbeaten in their first three games, and despite the defeat coach Rolando Maran will take plenty of positives out of it.

The Roma legend scored his 300th goal for his club but the Giallorossi dropped two valuable points against Sassuolo. The Italian genius is a living legend, and adored by all sets of fans from around the world. His impregnable aura and his goal scoring ability is perfectly summed up with this stat – Sassuolo were the 38th different team Totti has scored against in Serie A.

The legendary Francesco Totti scored his 300th Roma goal at the weekend on his 590th appearance. What a career https://t.co/WASlbAw3cy

Rudi Garcia praised Totti after the match but he was slightly disappointed with the result and understandably so. “Totti? 300 is an incredible number. We were waiting for it, but we’d all have preferred to celebrate a win,” Garcia stated at a press conference.

Juventus finally get going thanks to Pogba

Back to the wall, the fightback began. The Bianconeri took their first step in arresting their awful start to the season, after registering a comfortable 2-0 win over Genoa. After failing to win their opening three matches, Juventus have won two back to back games, including the Champions League opener against Manchester City.

There were plenty of positives from the match. Defence looked much better, Mario Lemina made a brilliant debut, and going forward they looked threatening. Juventus need to carry forward this momentum when they face Frosinone in their next match before their mouth watering clash away at Napoli.

After losing 1-0 in the Derby della Madonnia, AC Milan needed a strong comeback. And they did it in some style. Better performance in the midfield than the previous games, more cohesion among the players but the old problem of conceding silly and soft goals still persists.

Maldini Posted a picture of Davide Calabria on his Instagram, the boy is that good.

Three players must get special mention. First, new signing Carlos Bacca, a sly fox in the box, who netted a brace and added his goal tally to three so far.

Second, 18-year-old Davide Calabria. Let’s stats do the talking for the young lad – six tackles, two interceptions and three clearances, plus great to watch while overlapping and provided two key passes that includes one fine cross crucial in the build up to Bacca’s opening goal.

Third, Giacomo Bonaventura. Forget about those measured passes, fine assist, and his defensive shifts – just focus on his free kick. It was simply stunning. The weight on the delivery and the curve to go with it makes it a very special goal.

Napoli probably played some of the best football played by any team in Europe this season in their 5-0 win against Lazio on Monday. The Partenopei hinted of getting back to form when they crushed Club Brugge 5-0, but against Stefano Pioli’s men they took their game to a new level altogether.

Gonzalo Higuain: Has now scored 10 goals in 5 Serie A appearances against Lazio

Higuain seems to have found his goal scoring mojo back, while Lorenzo Insigne looks to be in fine form this season. The Italian forward scored a sensational golazo against Empoli, and produced another goal on Monday night (plus equally brilliant performance) to put Napoli back on track for the title challenge.