AC Milan made the most of a wretched weekend for Napoli and Lazio to climb up to third in the Serie A ladder. The Rossoneri had been on a good run of form heading into their game against plucky upstarts ChievoVerona, winning three of their last four league games, losing none.

But Rolando Maran’s Flying Donkeys were the aggressors for the majority of the game, until Milan got lucky with their finishing. Chievo were level on points with Milan before kick-off, and they had shown they could mix it with Italy’s big boys when they beat Inter 2-0 on the opening day.

Vincenzo Montella’s Milan found themselves on the receiving end of Chievo’s high intensity pressing football in the first half, but two fine long-range efforts from Juraj Kucka and Mbaye Niang just before and after half-time burst the home team’s bubble.

The Rossoneri are now third, five points behind leaders Juventus and level with second-placed Roma. They have also opened up a two-point gap between themselves and the likes of Lazio and Napoli behind them.

With Giacomo Bonaventura pulling the strings, and a few fresh faces in Manuel Locatelli and Gianluigi Donnarumma, Milan don’t quite have the stardust like their Champions League-chasing rivals, but there is a sense of togetherness in their ranks which can hardly be said of their cross-town rivals, Inter.

1. Inter stumbled to another home defeat as Cagliari came from behind to record their first away win of the season. The Nerazzurri had a tough weekend after a row between captain Mauro Icardi and the club’s hardcore “ultras”.

To compound Icardi and Inter’s problems, the Argentine contrived to miss a penalty, which was loudly cheered by the home support. Manager Frank de Boer later lamented his side’s meek display: “We stopped playing football once we took the lead.”

It was Inter’s third defeat on the spin, and they have won only once at home all season. Time is seemingly running out for Icardi and De Boer.

2. It was a classic smash-and-grab for Roma at Napoli as they came out on top in the battle for Italy’s second best team behind Juventus. Edin Dzeko scored his sixth and seventh goals of the season as Roma made light work of the absence of their travelling support for the game.

Napoli were all over Roma from the kick-off, and were unlucky to not score despite having dominated early proceedings. But it took an uncharacteristic mistake from Kalidou Koulibaly forced by Mohamed Salah’s typical harrying for Roma to take the lead against the run of play.

It was typical Roma stuff thereafter: soaking up pressure and playing on the break. I Lupi are now second, five points behind Juve and they leapfrogged Napoli in the process. Roma captain Francesco Totti said in the build-up to the game that whoever wins it will be the season’s “anti-Juve”, and Roma have staked their claim with their first win on the road this season.

3. Paulo Dybala has finally signalled his return to goalscoring form as his brace against Udinese stretched Juventus’ unbeaten home run this season to five games.

It wasn’t all plain sailing for the Old Lady, who were without Gonzalo Higuain in attack, as a Gianluigi Buffon mistake handed the visitors the lead. But Dybala was at the forefront of Juve’s comeback as he first restored parity with a fine, curling freekick and then sealed the win with a coolly-taken penalty early in the second half.

Those were Dybala’s second and third league goals of the season after scoring his first in the previous matchday against Empoli. Juve have missed the Argentine’s edge in attack, but they can now breathe easy since their main man is back among the goals.

4. Another man who is enjoying a personal resurgence is Lazio’s Ciro Immobile. After two seasons of jumping clubs and traveling around Europe, Immobile’s permanent return to Serie A this season has coincided with an upturn in fortunes for the 26-year-old.

Immobile scored twice for Italy against Macedonia last week, and continued his good run of form with a late equaliser against Bologna.

Roberto Donadoni’s Bologna kept the hosts at bay for the majority of the game, but a 96th minute lapse of concentration proved costly for the visitors, who were within touching distance of their first away win of the season. Immobile’s calm penalty ensured the spoils were shared and Lazio maintained their Champions League push. 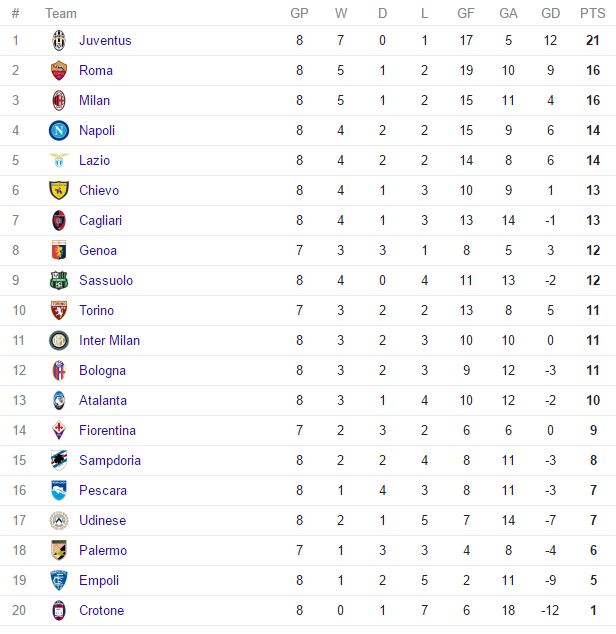