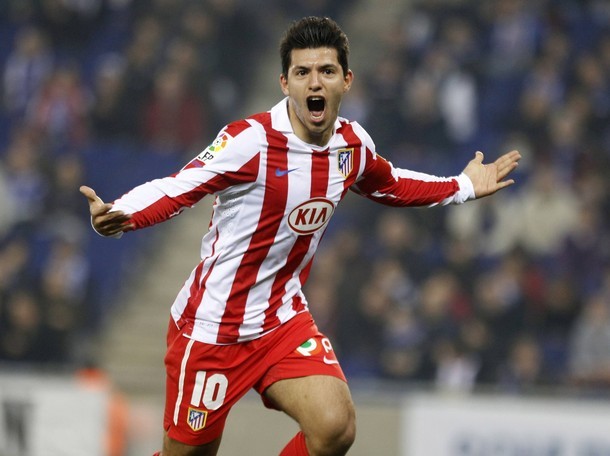 Sergio Aguero has quashed talk of a mega move to the Premier League by committing his future with Atletico Madrid by signing a new two year contract extension. However, is this just a ploy by President Enrique Cerezo to keep the club’s supporters content?

When a player signs a new contract you instantly assume that they are committing their future to the football club and therefore will resist any temptation to move on if an opportunity occurs. Last night’s rumour mill was in full swing as it was widely reported that Tottenham Hotspur had a £38.5million bid rejected for Aguero by the Spanish club. A near 12 hours later, Argentine Aguero has put pen to paper on a lucrative contract extension that will surely see him adorn the red and white for the foreseeable future – but will that be the case?

There is no denying that the player and club have a mutual respect for one another. It was the Rojiblancos who gave Aguero his big break in Europe and he has returned the favour with 89 goals in 217 appearances. He does not want to in any way disrespect the club by instigating a move elsewhere. He is still very young at 22 and will have a number of suitors willing to cash in on his services. However, the signing of his contract just seems to be a PR exercise by the football club and possibly the player. Interestingly the new deal also see’s the player’s buy-out clause reduced.

Aguero’s quotes are questionable. Following the announcement of  the deal he said:

“This club has always treated me very well. I am very happy, so I wanted to renew my contract here.” he told the media.

“I have made a commitment to take this club forward. I’m glad and I am happy to stay here, and I hope to continue here for many more years.”

Nothing odd here, just positive words from the front-man expressing his love for the club – that we believe – but when the question over a possible move in the summer was presented to him he said the following:

Now we may being pessimistic but those words don’t exactly echo belief that Kun Aguero will be an Atletico Madrid player next season. A time will come for Aguero to depart the capital of Spain and seek pastures new and his club are braced for the eventual day. Although pen to paper has been put on the dotted line, it may be sooner rather than later that the talented attacker will be adorning the colours of another club.