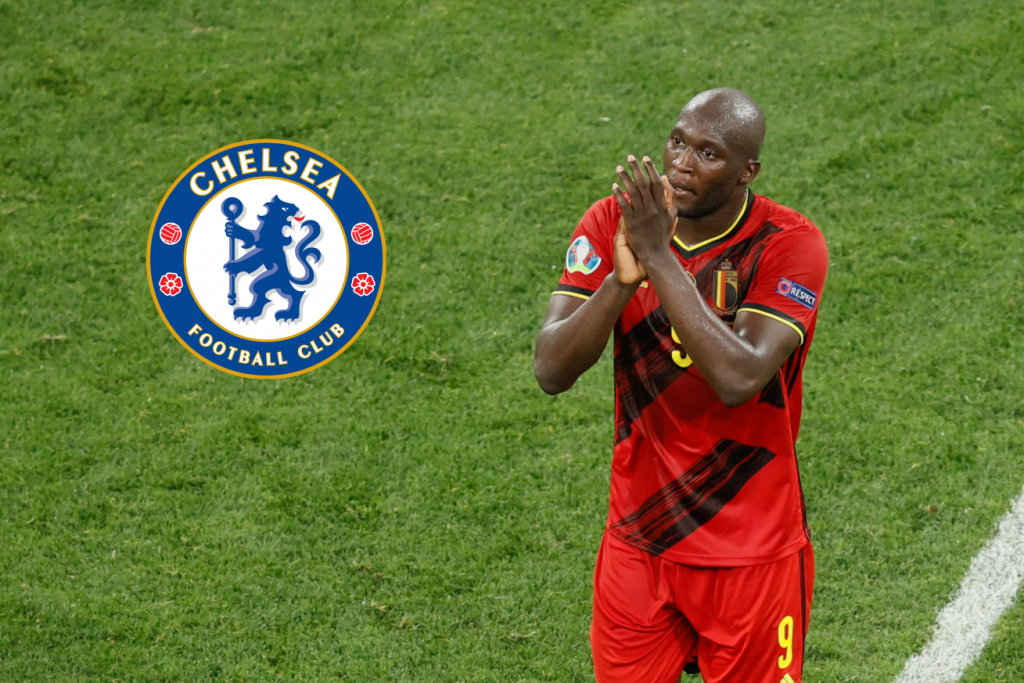 This transfer window keeps getting crazier and crazier.

Just days after Manchester City smashed the British transfer record to sign Jack Grealish, Chelsea have come very close to matching it as they have signed Romelu Lukaku for roughly £97.4 million.

He has put pen to paper on a -year contract reportedly worth over £10m plus bonuses per year.

The 28-year-old forward spent his childhood days in various clubs based in Antwerp, his birthplace, before moving to Anderlecht’s youth academy.

He made his league debut at the age of just 16, after signing his first professional contract 13 days before his birthday.

In two full seasons in the Belgian top-flight, Lukaku tore the league apart as he scored 39 times, after which it was time to move to pastures new.

The Belgian striker then joined Chelsea in 2011 for a fee reportedly between £10m and £17m thanks to add-ons, but his first season was rather disappointing as he managed just 10 appearances without scoring even as Chelsea went on to win the Champions League.

Season-long loans to West Bromwich Albion and Everton followed, during which he racked up 32 Premier League goals, leading to the Merseyside club signing him on a permanent transfer for £28m.

In the three seasons that followed and the previous one when he was on loan, Lukaku found the back of the net 87 times, securing another transfer.

This time, he went on to Manchester United, who splashed £75m plus £15m worth of add-ons. However, he had a rather disappointing time there.

Despite scoring 42 goals in all competitions in two seasons, Lukaku didn’t quite match expectations, and the final nail in the coffin for him was interim manager Ole Gunnar Solskjær quite clearly favouring Marcus Rashford over him, leading to yet another move.

On this occasion, the Belgian international went away from England as he joined Inter for a club-record €80m.

Under Antonio Conte, Lukaku was best to his fearsome best, scoring 64 goals in all competitions in two seasons including 47 in Serie A, taking the Milan-based club to their first league title in over 10 years in 2020/21 as the league’s Most Valuable Player.

He is now the most valuable player in the entire footballing world in terms of cumulative transfer fees after his most recent move, so let us explore why he is the perfect addition to Chelsea’s fearsome attack.

Lukaku is a complete forward who is comfortable with both his feet (although he slightly prefers his left) who prefers to operate as the right-sided striker in a front-two, although he can also play as a sole striker. 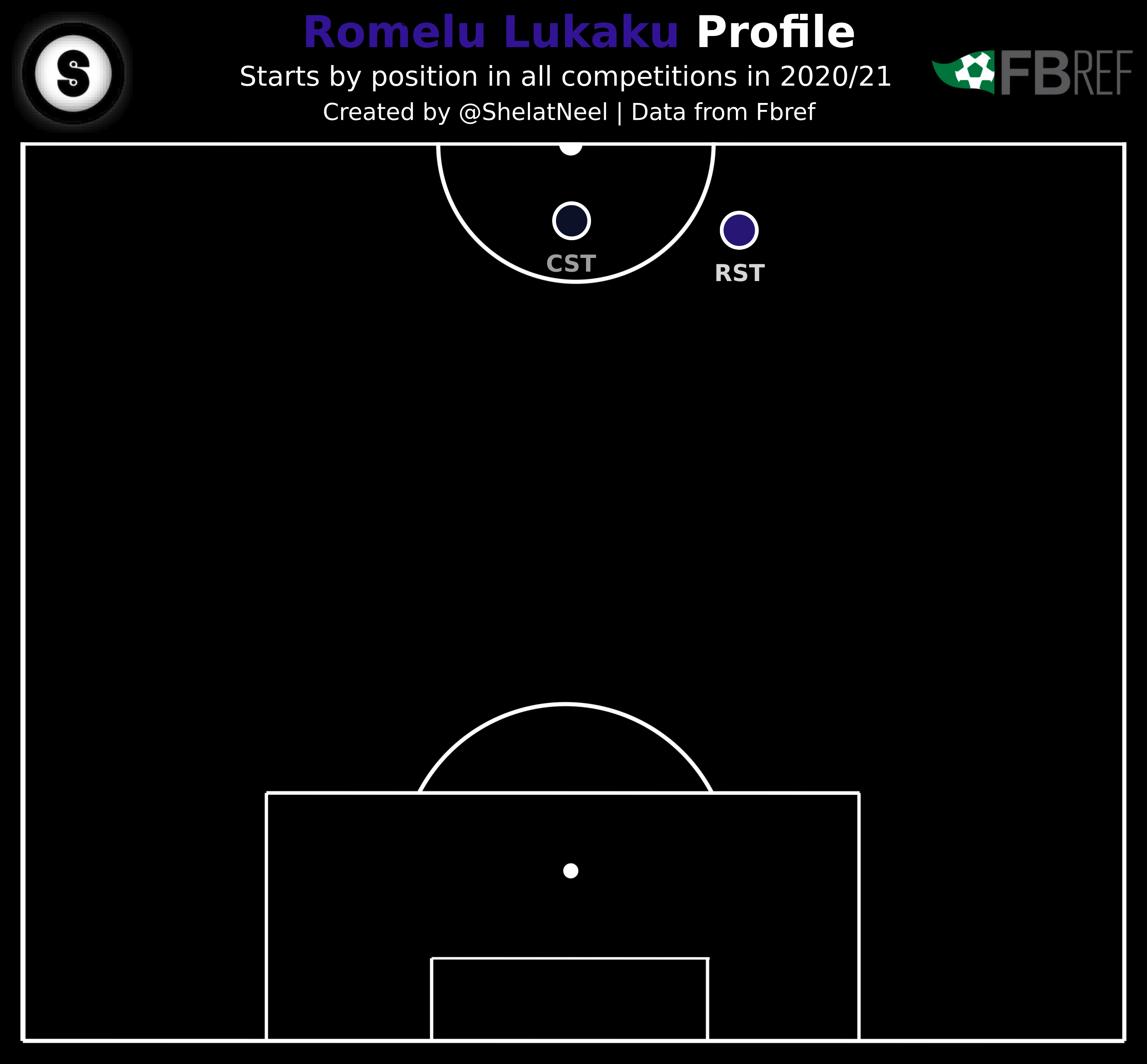 How good is he? Well, let’s have the man who has worked with him for about nine years at Everton and the Belgium national team answer:

Before we get into Lukaku’s footballing qualities that are visible to everyone, let’s address what is arguably his biggest strength – his mental strength.

The Belgian forward has come a long way in terms of development from his first stint at Chelsea, and there is good reason for that – he himself claims that he’s the ‘strongest dude you’re ever going to meet’.

While that may come across as a bit arrogant at first, if you read his story, you have to give him that.

As far as football goes, he’s quite good at that too. 35 goal involvements in 36 Serie A appearances last season tells you that his consistency is as good as it gets.

Besides that, he is just the complete centre-forward, doing everything from finishing to creating and linking up with his teammates. 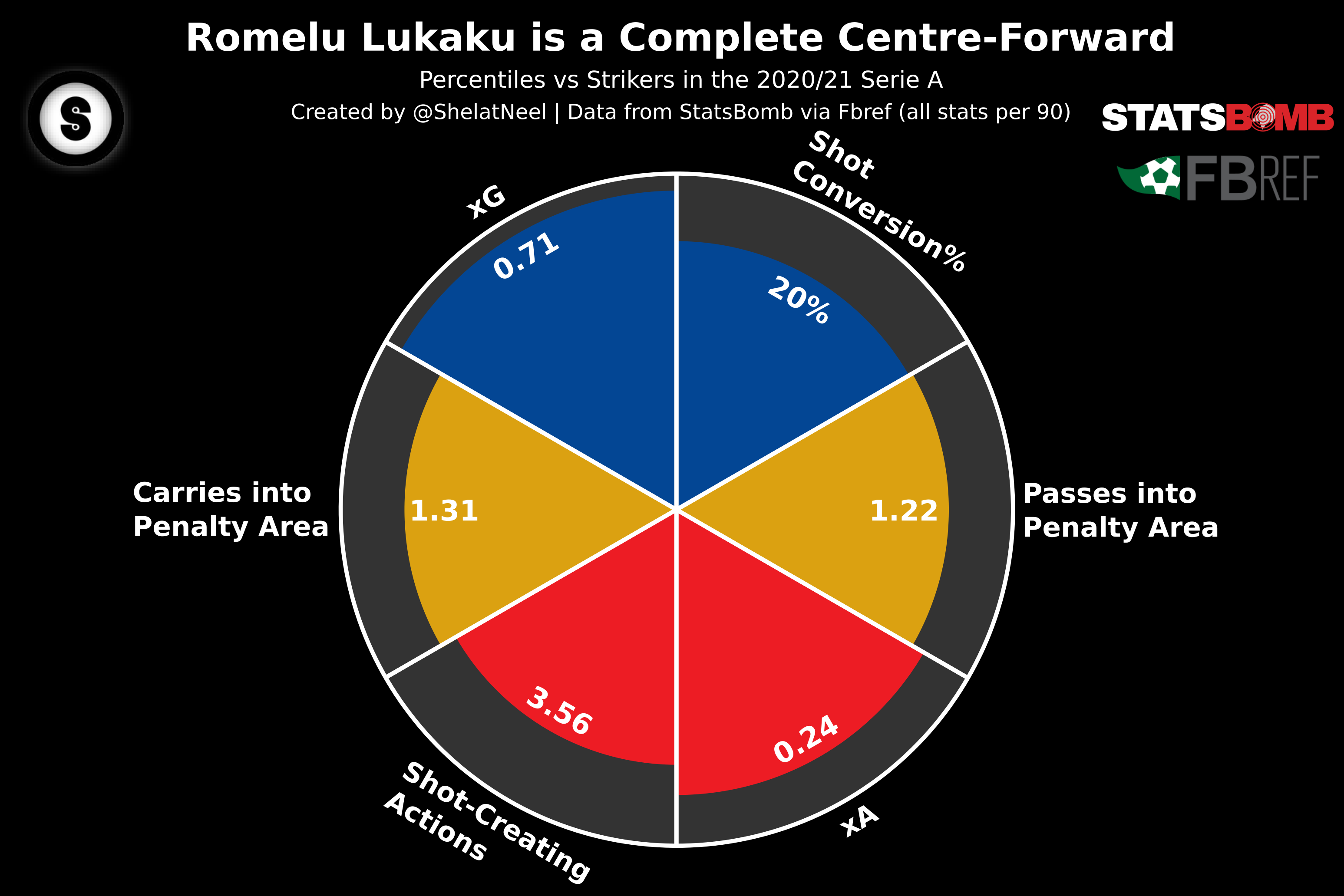 He knows how to get into great positions too, as is evidenced by his 12.08 progressive passes received and 7.46 touches in the penalty area per 90 in last season’s Serie A.

The Belgian striker’s physicality is unmatched, which he uses to become simply unstoppable when he drives at defenders on the break or hold-up the play and let his fellow attackers make runs on either side of him.

Unsurprisingly, therefore, Smarterscout gave him good ratings last season both in terms of dribbling (78) and link-up passing (65), along with a very high 86 in terms of attacking output.

As we previously discussed, Lukaku is a complete centre-forward who can do it all, so it is tough to find any faults in his game.

If there is anything he is sub-par at, it’s the defensive aspect of the game, as he averaged a very low 9.08 pressures per 90 in last season’s Serie A.

In all honesty, this isn’t really a weakness as much as it is a byproduct of Conte’s style of play, and since Chelsea are not the highest pressers in the Premier League anyway, it should not be a problem at all.

Now we get to the fun part because Thomas Tuchel has some fascinating options as far as his attack goes with Lukaku involved. 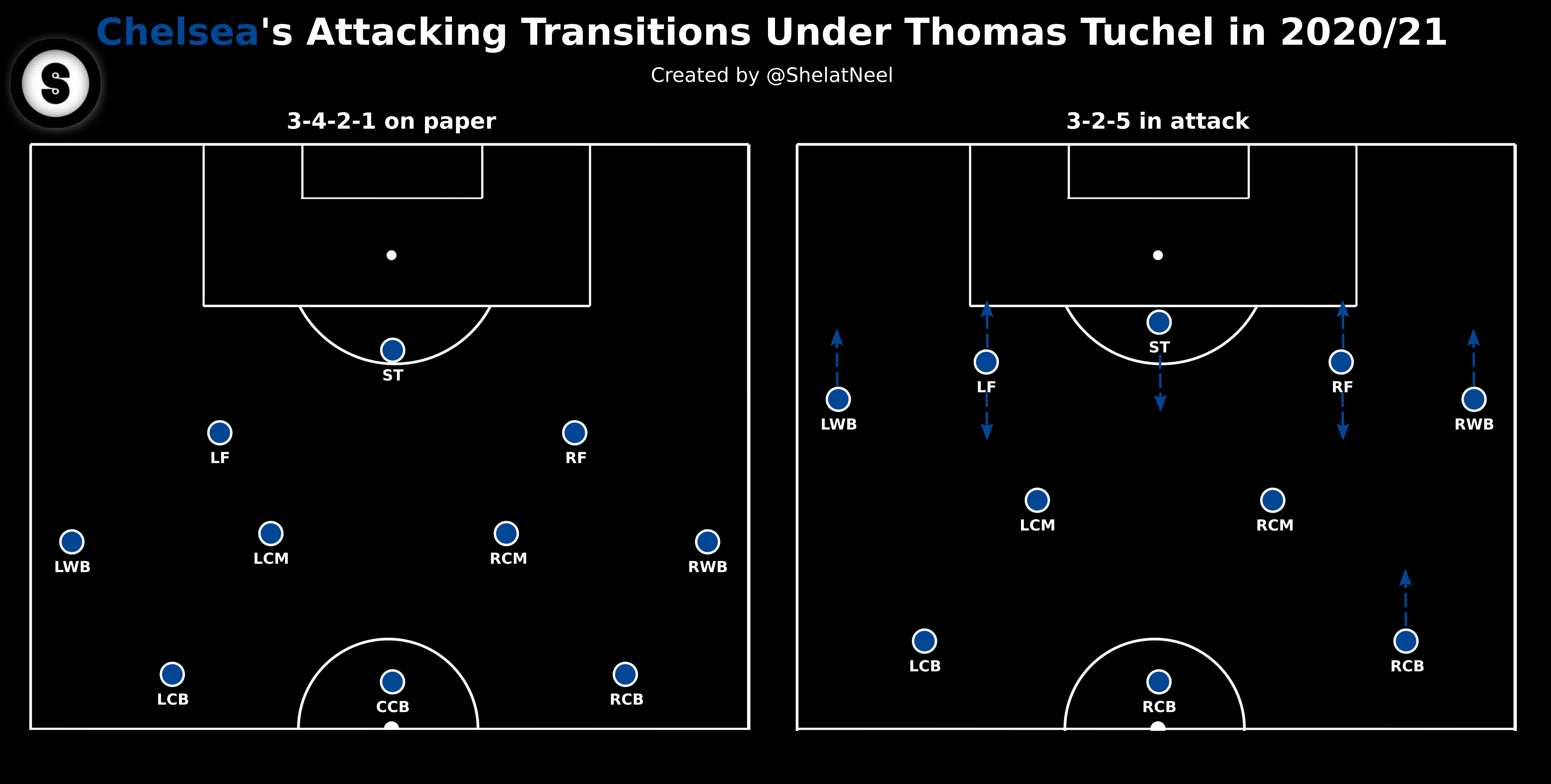 The Belgian striker’s favourite area of operation is the inside-right channel, as his action map from last season’s Serie A depicts.

It’s not quite as easy as playing Lukaku as the right forward because – well – he’s a striker and not as adept at dropping deep as that position would require him to be. However, there are some very exciting alternatives.

The first is quite simple, use him as a striker in the 3-4-2-1. Now, of course, this would mean dropping one of Mason Mount, Timo Werner and Kai Havertz.

The Englishman was irrefutably the Blues’ best player last season, both under Frank Lampard and Tuchel, so one of the other two will probably have to make way in the first-choice XI. 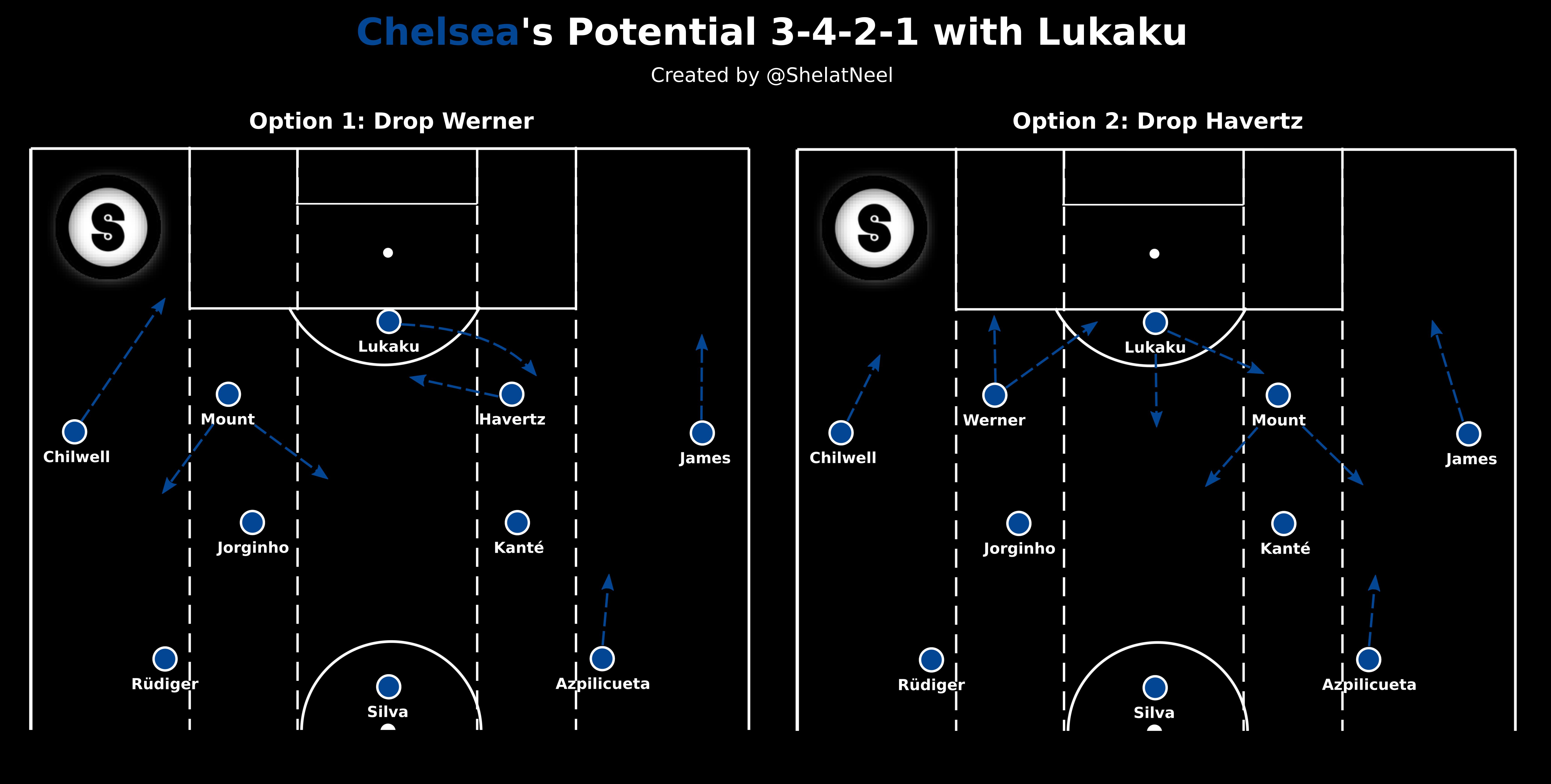 In the first option, Havertz moving into a central position would vacate the space in the channel for Lukaku, while in the second option, Mount dropping deep would do that while Werner would have the freedom to make runs in behind.

The third option, of course, would be to drop Mount and have Werner on the left and Havertz on the right, leaving the double pivot to do more of the ball progression into the attacking third.

If Tuchel really wants to go all out, though, then there is a way to fit all four in the same line-up. 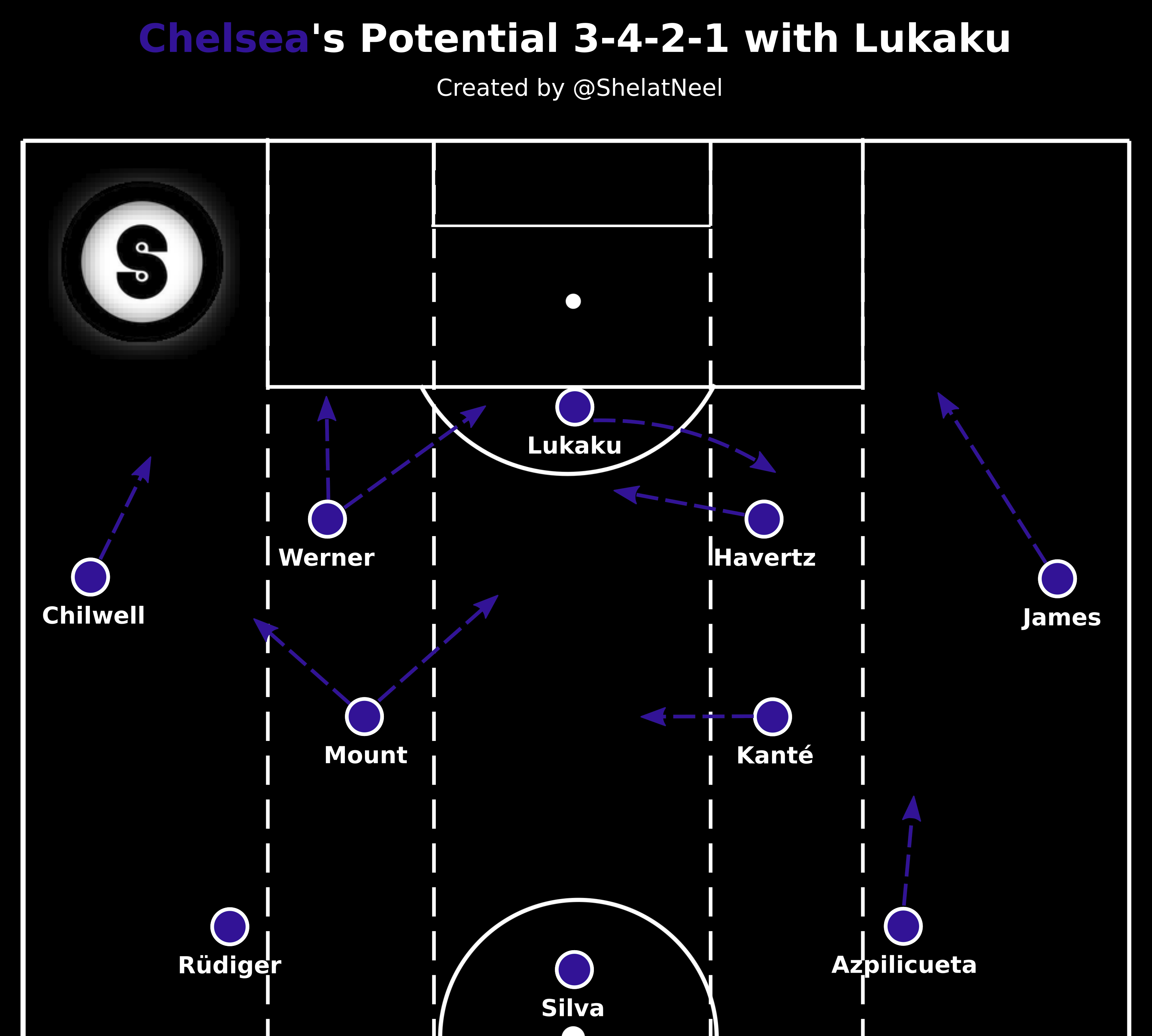 This is probably too extreme in the more defensively demanding matches against top-half opposition, but against sides that keep less of the ball and look to dig in and defend, this line-up could wreak absolute havoc.

Another option would be to switch to a 3-4-1-2, which was a system that Tuchel experimented with in the early stages of his tenure.

As aforementioned, Lukaku thrives in a two-striker system, and Werner was at his best at Leipzig in a similar set-up, and Havertz can also play the second striker role.

Lukaku and Werner complement each other perfectly stylistically as the former is great at holding up play and linking up while the latter’s runs are the strongest facet of his game, so a successful partnership between them could terrorise defences not just in England but all across Europe. 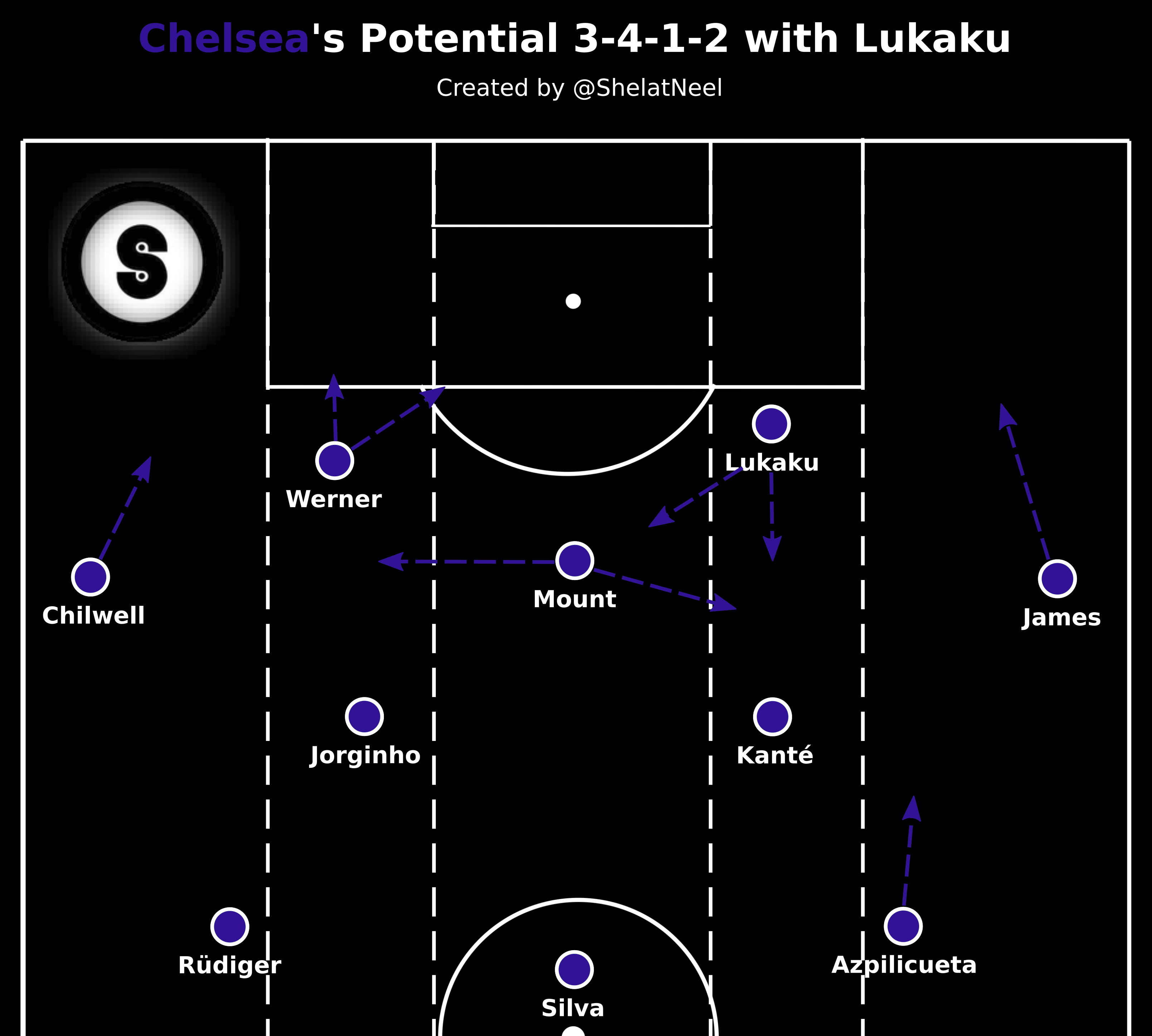 Lukaku’s inclusion should also have an interesting impact on the right wing-back role, where a more attack-minded player such as Callum Hudson-Odoi or Christian Pulisic could potentially be favoured ahead of Reece James to form a stronger partnership with Lukaku, while James would drop into the right centre-back position.

As the title of this piece says, Lukaku is the perfect signing for Chelsea.

The Belgian striker adds yet another attacking option for Tuchel to add to the likes of Werner, Mount, Havertz, Pulisic, Hudson-Odoi, Hakim Ziyech and Tammy Abraham.

The last man in that list has fallen further down the pecking order for the striker position, which is why a departure from Stamford Bridge is quite likely for him.

Interestingly, Atalanta are interested in Abraham’s services as they expect Inter to look to Duván Zapata in a bid to replace Lukaku, so that should be another exciting byproduct of this transfer.

Coming back to Chelsea, the Blues already had the quality to challenge on all fronts this season even without their new signing, as was evidenced by their run to the Champions League, top-four and FA Cup final last season.

Now, though, they have to be considered formidable contenders, and possibly even challenge for the title of favourites.