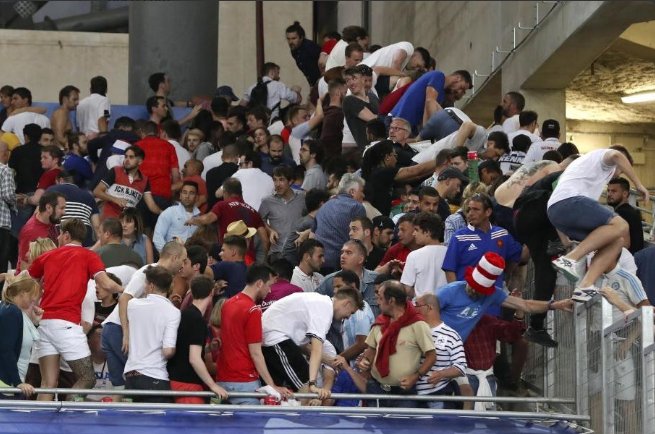 UEFA has opened disciplinary proceedings against the Russian Football Union following crowd disturbances after the full-time whistle in their 1-1 draw with England at the Stade Vélodrome in Marseille on Saturday evening.

The European football governing body have not opened any case against the English FA.

Tensions had been in the air long before kick off on Saturday as trouble flared around the port city of Marseille – a place where English hooligans had caused severe trouble at the France 98 World Cup following a 2-0 victory over Tunisia in their opening game.

In 2016, casual England fans were the victims of attacks from both French locals and organised Russian gangs.  One fan has been left in a critical condition as a result, and 35 are reported injured.

In a statement, UEFA said it “expresses its utter disgust for the violent clashes that occurred in the city centre of Marseille, and its serious concern for the incidents at the end of the match inside Stade Vélodrome . This kind of behaviour is totally unacceptable and has no place in football.”

Their disciplinary proceedings against Russia are for: crowd disturbance, racism and setting off fireworks inside the stadium.  The control, ethics and disciplinary bodies of UEFA will judge the Russia case on Tuesday, the day before their second Euro 2016 Group B match against Slovakia.

Yesterday was the worst example of football hooliganism mainland Europe has seen since the 1990s and was reminiscent of the 1970s-1980s when hooliganism was rife.

UEFA now claim it will implement “corrective measures” to strengthen security at the European Championships after “segregation issues” last night.  Many fans and journalists have questioned why they weren’t prepared in advance and how fireworks were allowed into the stadium.

French police have said 35 people were wounded in clashes that erupted between England and Russia football supporters before and after the match in Marseille.  They say 15 people have been arrested, seven on Saturday and eight more on Sunday.

Several videos uploaded to social media, including one from talkSport presenter Stan Collymore, show that, for once, it is not England fans that have started the trouble in France.  Rather, it is the English who have been under attack from glass bottles and chairs outside of the stadium, and rushed by opposition supporters inside.

“It’s the right thing, there were flares, there was a flare gun, there had been clashes in the stands, it’s necessary to sort all of this out.

“We will prepare properly, we will present our position… the fans were rooting greatly, but there are people who do not come for the football.”

Russia are due to host the 2018 FIFA World Cup and one will now question FIFA’s decision to allow this to happen given the fans safety fears may bring the attendance figures down.  Russian football itself has very poor attendance figures for a country of its size, and a lack of passion for the game as it is.