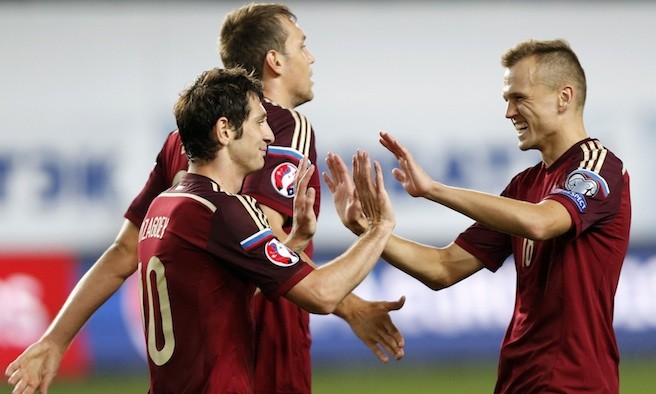 Since FIFA’s award of the 2018 World Cup to Russia, there has been a countdown to the global footballing spectacle by almost everyone that lives in the world’s biggest country.

Despite fears the tournament could be impacted by hooliganism issues and the inclusion of Video Assistant Referees may take away from the showcase, the home support will be looking forward to the competition.

However, Russia’s pre-tournament form has been poor and as such expectations have been checked, despite the hosts being handed a manageable Group A.

Although there are no real stars in the Russia line-up, there will be familiar faces as an experienced group look to deliver relative success.

The average age of the squad is quite high, leading to concerns that the next generation of national players are being overlooked in favour of older heads.

A provisional squad of 29 has initially been named.

The major name not in Russia’s initial group is Zenit St Petersburg forward Alexander Kokorin, who missed out due to a knee injury.

The 27-year-old’s absence is a blow for the competition hosts, with goals hard to come by at times over the last couple of years.

No-one in the Russia squad has more than Kokorin’s 12 international strikes and as such the home side will surely miss the striker.

After high-profile foreign coaches such as Guus Hiddink, Dick Advocaat and Fabio Capello, Russia have returned to home-grown options in recent years.

After less than a year of Leonid Slutsky being at the helm, Stanislav Cherchesov has been in the role since the aftermath of Euro 2016.

The former Russia international goalkeeper has overseen a tough run of international friendly results and a poor Confederations Cup campaign, with only a handful of victories to date.

Previously the manager of Dynamo Moscow and Legia Warsaw, Cherchesov was a relatively uninspiring choice to replace Slutsky and has a lot of expectation on his shoulders.

Cherchesov has switched Russia to a three-man defence and 3-5-2 formation over the last two years.

The issue that the hosts have is a lack of pace at the back and as such expected the Russians to sit deep to avoid being cut open by speedy attacking units.

A compact three-man central midfield will be combative, while Russia will play two up front, most likely Fyodor Smolov and Aleksey Miranchuk.

While Russia will depend on Smolov to score goals at the tournament, the lack of superstar quality in the squad will mean that the team will need to work cohesively to succeed.

Akinfeev is the national captain and an experienced head for club and country, with the 32-year-old playing over 100 times for his nation.

An excellent goalkeeper on his day, it may be the CSKA Moscow man’s influence off the pitch that is equally as important as his saves on it.

Golovin has become the poster boy of Russian football over the last 12 months, with high hopes the 21-year-old midfielder can inspire a new generation of players coming through from the youth ranks.

The CSKA Moscow midfielder has impressed in Europe this season and his range of passing and energy should be enough for him to start for Cherchesov’s men this summer.

With club team-mate Alan Dzagoev potentially alongside him, the midfield pair will be essential if Russia are to record positive results.

Golovin will be on the radar of the club scouting networks and the rising star’s creativity is needed to provide chances for Russia’s strikers.

When Cherchesov was appointed, he was handed the mandate of leading Russia to the World Cup semi-finals.

In reality, with his side recording only four victories in 18 games since 2016, progression through the group stage should be viewed as a success.

Russia will most likely be in competition with Egypt to join Uruguay in the knockout rounds, where Spain or Portugal will end their tournament should they make the round of 16.