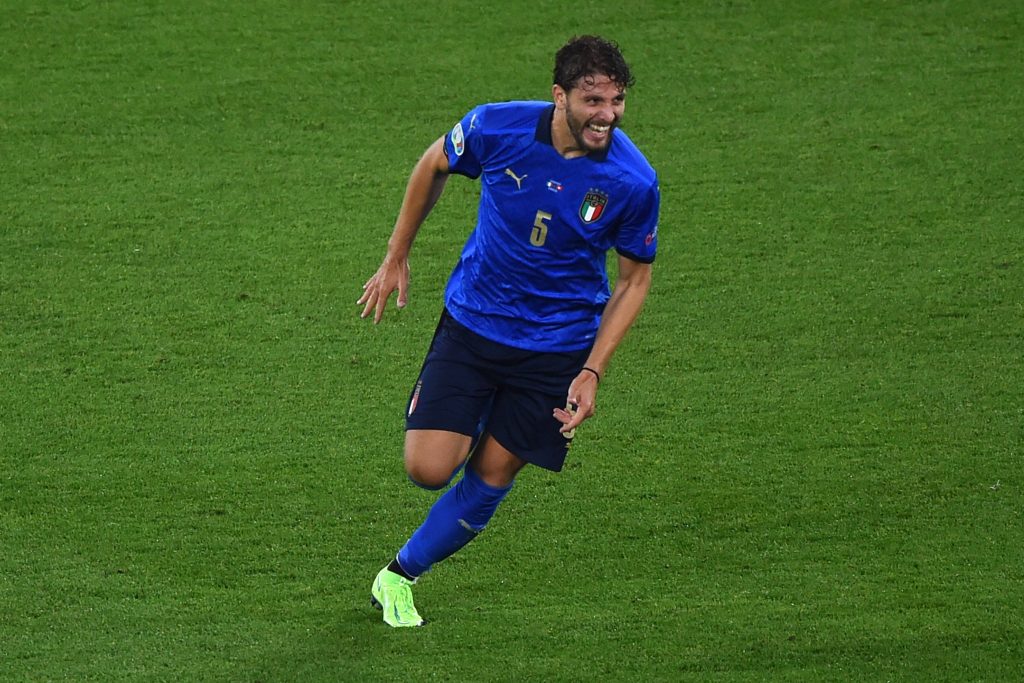 It’s been another exciting round of Euro 2020 action, with several players putting in standout performances for their country.

As we approach the last selection of group stage fixtures, it’s all very nicely set up. We should be in for an enthralling finale.

Here is our best XI from the second round of Euro 2020 games.

Danny Ward (GK) – Wales go into their final group game with Italy in a very good position. With four points from two games, they look almost certain to qualify for the knockouts.

And they couldn’t have done it without Danny Ward, who was excellent again in the win over Turkey.

His stunning late save from Merih Demiral’s header was vital to keeping his side ahead in the closing stages, as they later got a second.

Denzel Dumfries (RB) – The right-back has made a solid start to the tournament, contributing to all three goals in the opener against Ukraine.

He carried this form into Netherlands’ second game against Austria. He won a penalty in the first half for Memphis Depay to convert and tapped in his second goal of the tournament after the break.

Grant Hanley (CB) – Up against Harry Kane, Grant Hanley was not expected to have an easy night. However, the Tottenham Hotspur forward was very quiet all evening.

While a lot of the post-match chat has been about Kane’s disappointing performance, it would be unfair to discredit the excellent work by Hanley. He won every header, tackle, and 50/50 against the three-time Premier League Golden Boot winner.

Igor Diveev (CB) – Russia needed a result against Finland to keep their hopes alive, and they managed this with a scrappy 1-0 win.

Full credit has to go to Igor Diveev in the defence, who maintained their clean sheet with two crucial last-ditch tackles to deny Joel Pohjanpalo and Teemu Pukki when through on goal.

Robin Gosens (LB) – Germany pulled off an exceptional 4-2 win over Portugal, and Robin Gosens was the star of the show. Playing as a left-wing-back, the Atalanta man was a constant threat.

He assisted Ruben Dias’ own goal to equalise and set up another after the break for Kai Havertz. And, to cap it off, he nodded home his side’s fourth just before being substituted.

Manuel Locatelli (CM) – With Marco Verratti out injured, Manuel Locatelli has been given his opportunity in the heart of midfield, and he has grabbed it with both hands.

He was the best player on the pitch in Italy’s resounding 3-0 win over Switzerland. He tapped in to make it 1-0 and added a beauty in the second half to double their lead.

After a promising first appearance against North Macedonia, the Dutchman was at his best in the defeat of Austria. He was calm, composed, good on the ball, energetic – everything we know he can be.

Kevin De Bruyne (CM) *PLAYER OF THE ROUND* – Belgium struggled against a spirited Denmark side, finding themselves 1-0 down at half time and failing to create anything of note.

On came star man Kevin De Bruyne, who had been making his first appearance of the competition following an injury. The midfielder’s introduction completely flipped the game on its head.

First, he set up Thorgan Hazard for a tap in with a brilliant pass across goal. And moments later, he netted the winner with a thunderous left-footed strike in at the near post.

The winger got the ball rolling in the first half with a goal and an assist to put Ukraine two ahead against North Macedonia. Only two players have got more goals at the tournament so far.

Despite being on the losing side on Saturday, the five-time Ballon d’Or winner caused several problems for the Germany backline.

He started and finished a move to put Portugal 1-0 ahead and later got an assist for teammate Diogo Jota.

Gareth Bale (LW) – Yes, he played as a right-winger on paper, but he and Daniel James tended to switch often.

The Real Madrid outcast showcased his ability as a playmaker in Wales’ victory over Turkey, assisting both goals for the Dragons. And, to be completely honest, he was very unlucky not to have four or five assists.

The only blot on his display was a frankly awful penalty, which he won but skied miles over the crossbar. Nonetheless, an excellent performance.