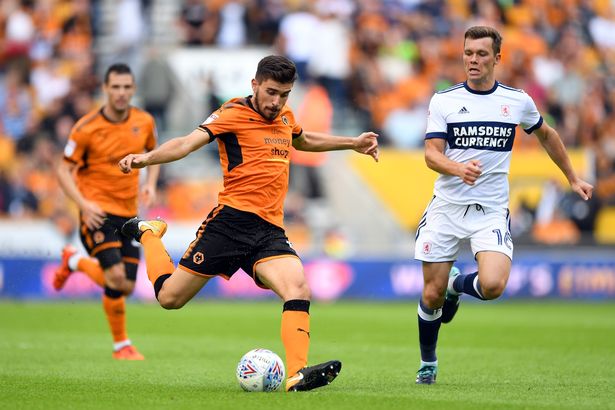 Wolves face Middlesbrough in the Championship later tonight and Nuno’s men will be looking to pull further clear of Cardiff with a win.

The Bluebirds are six points behind the leaders but they have a game in hand.

Wolves will be desperate to win the Championship and they cannot afford to drop points now. After having spent considerably this season, it would be a catastrophe if Wolves failed to win the title.

The hosts are in superb form right now and Wolves will need to be at their best to get a win here. Pulis’ men have been hard to beat at home.

Wolves midfielder Ruben Neves sent out a message on Twitter implying that the visitors will have to perform very well and secure a big result tonight. The Portuguese has been very good for his side this season and the fans will be delighted to see his confidence, commitment and enthusiasm ahead of a big game.

Tomorrow is time to think like a wolf again ????⚫@WolvesPRT @Wolves pic.twitter.com/zjBzRBhlRF

Nuno’s men have worked hard to stay ahead of everyone else so far and they will need to put in a similar effort to get past Boro later today.

The away fans reacted to the midfielder’s message on Twitter. Here is what they had to say.

Ain’t guna lie… probably my most favourite tweet I have ever seen!!!! @rubendsneves_ buzzing for tomorrow but still feel sick with worry… we belong and deserve the PL and this title! #WolvesAyWe

Our player of the season.
It was definitely worth the step backwards from where you were to where you are. Thank you from all the terraces at WWFC ??. We now need you to get some of the loan players here permanently please. ?

photo says everything u need to know cos if you aint ready we are .Wolves ay we

Ruben,,, let your feet and football brain do the talking at Middlesbrough and bring back the 3 points to Wolverhampton,,,, Wolves Ay We ?

Not won there since 1951 Ruben,
Lets change it today #wwfc

Got awful record at Middlesbrough Ruben. Sure you and the rest of the lads can change that ??