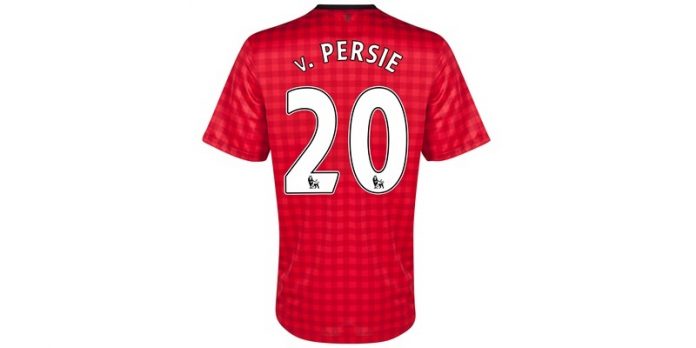 The contest is now over. Congratulations to Helen Jackson for winning the shirt. Thank you for taking part in this contest!

Former Arsenal skipper, Robin van Persie, got off to a blistering start at Old Trafford. He was a Manchester United player for just five days when his first shot for the club got him his first goal. He has since scored 24 goals in 31 appearances in all competitions so far.

To celebrate van Persie’s excellent half-a-season with United, the About ManUtd app in collaboration with the Soccerlens Store brings a competition where you can win RVP’s Manchester United shirt.

About ManUtd is a fact-supplying iPhone app that covers official matches played by United since 1886. It lists all stats and summaries for each of the players, managers, seasons and opponents. The app is available for iPhone, iPad and iPod Touch from the Apple App Store.

RVP Competition: How it works

Soccerlens has one Robin van Persie’s number 20 shirt to give away to our readers. All you have to do is answer the following two questions about Manchester United:

Q. 2: Before Robin van Persie, who was the last player to make the direct switch from Arsenal to Manchester United?

The deadline for this competition is 31st January 2013. The winner will be selected through a random draw and will be contacted by Soccerlens on 1st February to confirm their details.

To improve your chances of winning RvP’s shirt, you can download the About ManUtd app from the App Store to help you answer the questions..