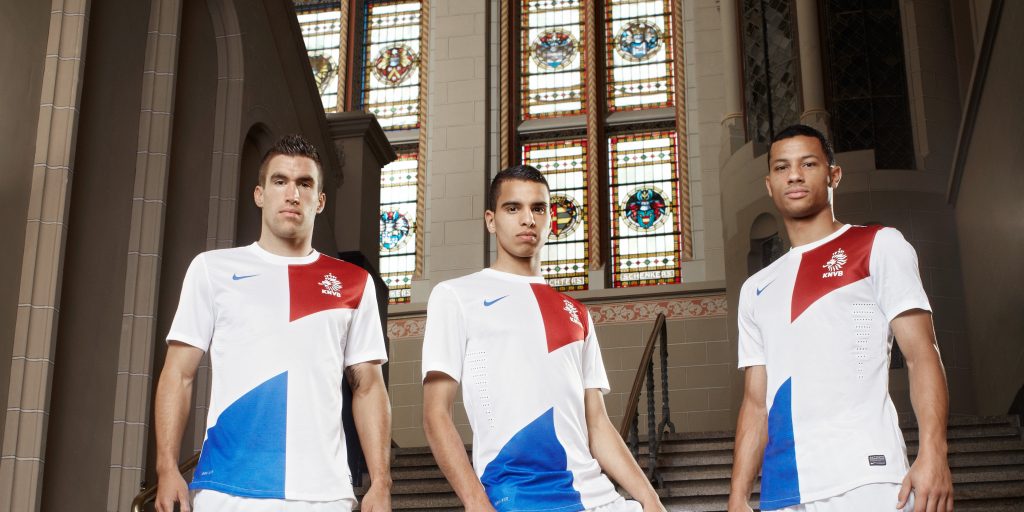 The shirt takes the three colours of the Dutch national flag with white shorts and white socks. The shorts are white with blue trimmings as are the socks that have a “Nederland” detail on the back of each.

The new away strip mirrors the home shirt – which has two shapes – one covering the crest, the other at the hem. The shapes point to the Netherlands’ relationship with geometry and space.

The Dutch football logic is based on simplicity and that is the essence of total football – the Dutch’s gift to the game – that was built on the simple and effective use of space on the pitch.

The national team coach, Louis van Gaal said about the Netherlands 2013 away kit:

“As we start on our new journey as a team, the new away [kit] for the side represents a new beginning for the national team.

It’s an exciting time ahead for the squad and the nation.”

The kits are constructed using Nike Dri-FIT technology to wick moisture and are made out of 23% lighter fabric with 20% stronger knit structure than Nike’s previous kits. The shirts also feature laser-cut ventilation holes to promote localised cooling, to help regulate player temperatures during a match.