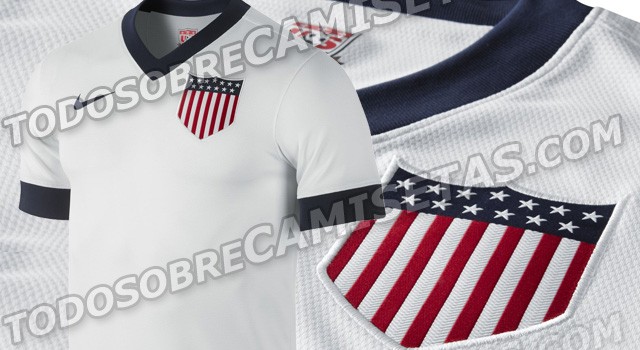 2013 marks one hundred years of soccer in the US. The shirt features a special centenary crest. The new crest is simply the flag of USA but for European fans, it looks a bit like the Atletico Madrid crest.

The shirt is white with navy blue trims, V-neck collar and the Nike logo. The US Soccer Federation logo is inside the collar on the back.

Officially, the United States 2013 home shirt will be unveiled later this month.

Nike has been the official sports goods supplier of the team since 1995. The USMNT currently wears striped red and white shirt. Since their first unofficial game against Canada, white tops and blue shorts have been a frequent feature in their kits.

US played an international friendly against Canada in their last game at the BBVA Compass Stadium in Texas – home of the Houston Dynamo. They are now preparing to face Honduras in the fourth round of the 2014 World Cup qualifiers at the Estadio Olimpico Metropolitano in San Pedro Sula, Honduras.

The 2013 kit will probably be debuted against Costa Rica next month in their second fourth-round qualifier. The game will be played at Colorado Rapids’ Dick’s Sporting Goods Park.