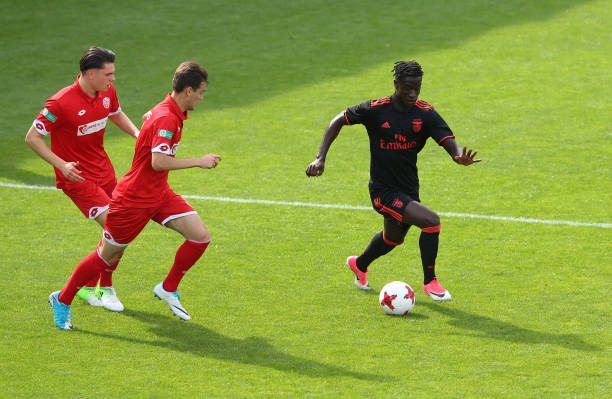 According to Record, West Ham United are set to sign Portuguese Benfica B forward Mesaque Dju.

The 19-year-old is set to join the Hammers under-23 in the coming days, and will link up with compatriot Xande Silva.

The teenage sensation caught West Ham eyes after starring alongside their former player Domingos Quina in Portugal’s Under-19 Euros win last year, and the club have now finally secured his signature.

On his day, Mesaque is such an exciting player to watch. He still needs to work on his decision making, which is poor most of the times, but he is a great talent. pic.twitter.com/L2ZK0yezRb

Dju helped Benfica to the Campeonato Nacional de Juniores title last season while he helped them to the finals of the 2016–17 UEFA Youth League which they lost to Red Bull Salzburg.

The Guinea-Bissau-born forward made it to the UEFA European Under-19 Championship Team of the Tournament two years ago and is widely regarded back home as a massive potential.

West Ham manager Manuel Pellegrini has shown he is open to handling youngsters a chance after making Declan Rice a key member of the senior team and promoting Grady Diangana.

Should Dju impress with the under-23’s, he could find himself soon playing alongside the big boys in the Premier League in no time.