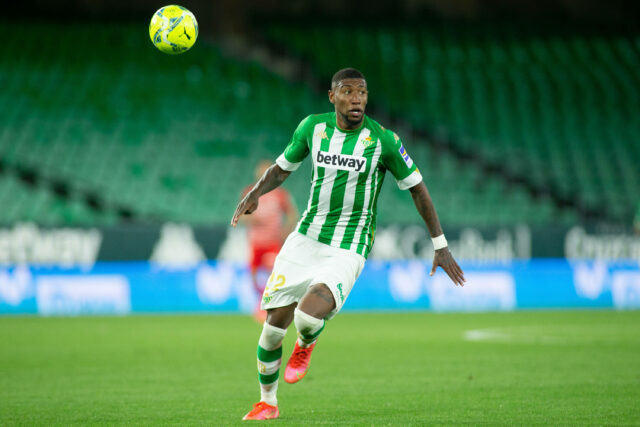 Tottenham Hotspur and Arsenal are reportedly interested in signing Emerson Royal in the summer transfer window.

According to reports from The Express, the two north London clubs are set to go head-to-head for the signing of Real Betis right-back.

The 22-year-old is currently playing on loan at Betis from Barcelona. The Catalan giants are looking to sell him this summer.

Barcelona signed Emerson from Atletico Mineiro for £10.9 million back in 2019. However, he is yet to make an appearance for the La Liga giants.

He has spent the past two seasons in Betis, where he has really impressed.

Arsenal and Spurs are keen to sign the young defender, who is currently valued at around £23m.

At Barcelona, Sergino Dest and Sergi Roberto are currently battling it out for the right-back spot, and Royal apparently doesn’t feature in Ronald Koeman’s first-team plans.

Real Betis director Antonio Cordon has already stated that it would be difficult for them to bring Emerson back to the club beyond the end of the season.

The young defender has made 31 appearances in La Liga this season, bagging one goal and four assists.

Tottenham could be in the market for a new right-back, with the future of Serge Aurier in doubt.

The Ivory Coast international has been recently linked with a move to Real Madrid, while Paris Saint-Germain are also keen to secure his signature.

Arsenal also need a new right-back, with Hector Bellerin amongst the players looking to leave the club this summer.