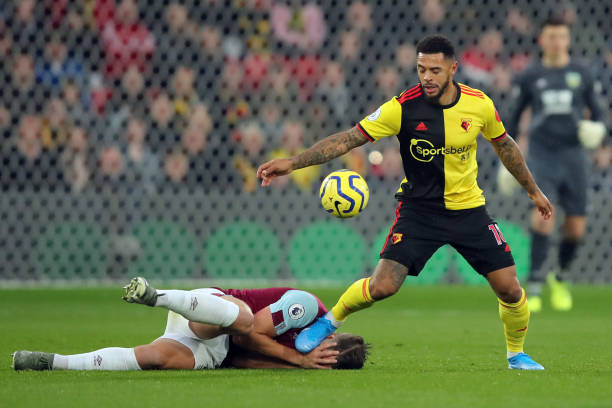 According to The Athletic’s Phil Hay, Leeds United have asked Watford about loaning English striker Andre Gray this month.

The Elland Road outfit want to bring in another forward following Eddie Nketiah’s departure and are keen on Southampton’s Che Adams.

However, a move is proving difficult with Saints boss Ralph Hasenhuttl not willing to let the striker leave.

Leeds have to bring in another striker before the January transfer window shuts in order to boost their promotion chances, and a move for Gray could be on the cards in the coming days.

Hay said during a Q&A session on The Athletic:

“They obviously like Adams and they made an enquiry to Watford about Andre Gray (but were initially told know). Gray might be one to watch because I could see that situation changing. He’s on a very hefty wage though. There’ll be talk of Dwight Gayle too, inevitably, but he’s injured. Almost everything they’re looking at is initial loan with an obligation to buy in the summer. Most targets are in the Premier League.”

The Hornets striker has started just seven Premier League games this term, coming off the bench on 11 other occasions.

Gray has two goals in those appearances but he boasts of an incredible record in the Championship after scoring 23 goals in 41 games for Burnley during the 2015-16 campaign.

It will be interesting to see if the Whites can pull off a move for him or if they will go after another striker.