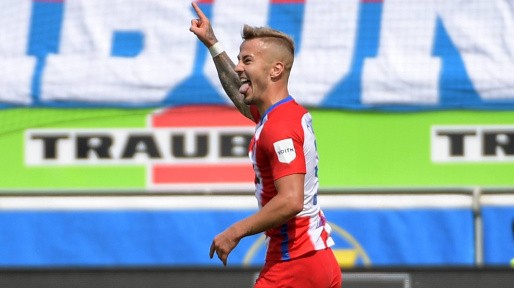 According to reports from the Daily Record, Celtic have suffered a big blow in their attempt to sign Niklas Dorsch.

The 21-year-old impressed heavily for Heidenheim in Bundesliga 2 and has been heavily linked with a move to Scottish Premiership champions Celtic.

However, the exciting young midfielder has insisted that he only wants to play in the Bundesliga.

The report claims that Dorsch, who has three caps for Germany, can go for a bargain fee of £3 million because he has a buy-out clause.

Celtic would have easily matched his transfer fee. However, the player has insisted that he has no intention of moving anywhere next month.

The midfielder further adds that he wants to play in a top-class league, and that playing in the Bundesliga is his top priority.

He said, as quoted by the Daily Record: “At the moment, I just want to be successful with Heidenheim. We do outstanding work there, have a great environment and are strong in the league. We are realistic, but we have a good chance of promotion.

“I have high expectations. My aim is to play in a top-class league. I’ve read about interest from other clubs, but for me, playing in the Bundesliga should always be the goal of an ambitious young player like myself.

“And I have time to decide. This won’t be an issue for me until the end of the season.”

The news will come as a blow for Celtic who are thought to be keen on signing him. The Bhoys are looking to bolster their midfield in the January transfer window and they should now look for options elsewhere.