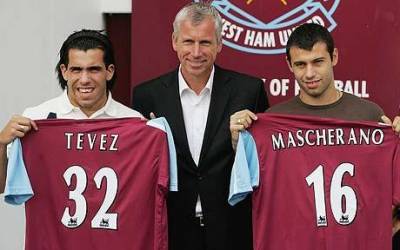 Argentine striker Carlo Tevez has admitted that he wouldn’t mind returning to Europe to play for West Ham United for six months.

The Boca Juniors star spent the 2006-07 season with the Hammers after arriving from Corinthians, scoring seven times in 29 appearances across all competitions.

He bagged 73 goals in four seasons at the Etihad Stadium, linking up with Juventus for two seasons that yielded 50 goals before leaving Europe.

The 36-year-old had a short stint in Asia with Chinese Super League’s Shanghai Shenhua but has been back home in Argentina with his boyhood club.

Tevez is edging closer to retirement but he isn’t ruling out one more adventure overseas, and he has teased linking up with the Hammers once again.

“If you tell me from Europe to go play, I would go to West Ham. Even if it is six months to be applauded,” the striker said on Radio La Red.

It’s definitely just a wish from Tevez, and there is no denying that he could struggle to cope with the physical demands of the Premier League should he return after seven years.

The Hammers are currently 17th in the Premier League table with seven games remaining in the campaign, level on points with 18th-placed Bournemouth and 19th-placed Aston Villa, with only goal difference separating them from the relegation places.