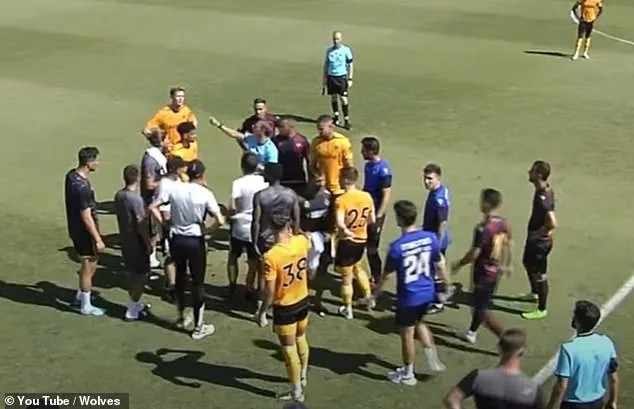 Wolves fell to a 2-1 defeat against Levante in a pre-season friendly on Thursday morning, but it wasn’t the result that stole the headlines after four red cards in the first-half.

After two brawls in five minutes, Wolves had duo Yerson Mosquera and Daniel Podence sent off before half-time along with two other Levante players.

Instead of leaving the second half as a 9-a-side game, referee Jorge Tarraga decided that they should resume with 11 players each in a strange decision that has baffled football fans around the world.

Tarraga went one further and blew for the full-time whistle after just 86 minutes, as it appeared he’d had enough of the encounter and brought it to a close as Levante won 2-1 behind-closed-doors.

This is crazy. Daniel Podence has been sent off now. He clashed with a Levante defender and it all kicked off again. #wwfc pic.twitter.com/iCNXmoIm7K

There were some unorthodox challenges from Levante players which undoubtedly added fuel to the fire that was about to explode, in one of the most memorable pre-season fixtures in history.

Seems a Levante tactic. Smash em' behind a pole. pic.twitter.com/jQiXkE6qAD

Wolves are currently 12/1 to finish in the Premier League’s top six ahead of the new campaign beginning in August, and if you fancy a punt on their chances at European football make sure to check out our list of the best football betting sites.

Hee-Chan Hwang has made his move to Molineux permanent from RB Leipzig and Irish international Nathan Collins completed a high-profile move to the West Midlands from Burnley, in a promising summer for Bruno Lage’s side.