Real Madrid have shifted their attention to Sporting midfielder William Carvalho, as the reigning European Champions are looking to find a top replacement for German midfielder Sami Khedira. 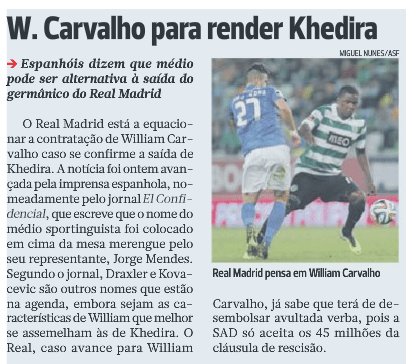 Madrid have been linked with several top players like Vidal, Kroos, Pogba and Ramires in the past couple of months, but are facing difficulty in luring any one of them, with their respective clubs either asking too much money or refusing to negotiate any deal.

According to both A Bola & O Jogo, the two major newspapers in Portugal, Real Madrid are showing keen interest in Sporting midfielder Carvalho, who is also a reported target of Manchester United.

United were heavily interested in Carvalho, with several media outlets even claimed the Red Devils had agreed a deal to sign him. Scouts had followed him for uncountable number of times while former manager David Moyes was keen to land him at Old Trafford.

However, the situation has changed since the appointment of new manager Louis van Gaal. The Dutchman wants to stamp his own authority in the squad and is likely to bring in the players he likes to work with.

If the reports are to be believed, Van Gaal wants to sign Bayern Munich’s world class midfielder Bastian Schweinsteiger, and has asked the United hierarchies to press ahead with the move.

We can now say that interest in Carvalho has simply died down from United’s end and it’s up to other European heavy weights to take a gamble on him. Madrid could be one of such clubs, but Sporting’s reluctance to sell him for less than €45m, which is his buy-out clause, might stop the deal from going through.