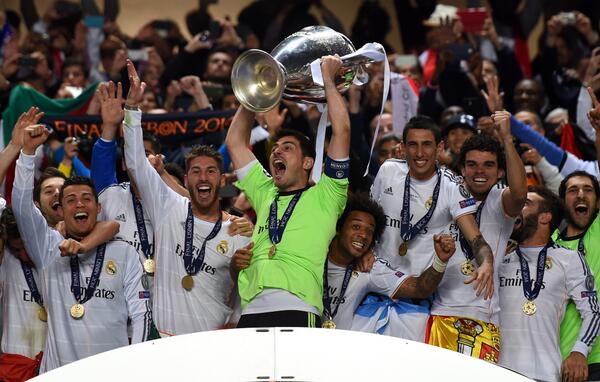 Cristiano Ronaldo, Gareth Bale and Sergio Ramos were among the scorers for Real, who extended their record as the most successful club in European football in the Portuguese capital on the weekend, with Carlo Ancelotti also writing his name into Real folklore by leading to the club to trophy number ten, coming twelve years after their last final appearance, where Zinedine Zidane’s iconic volley secured victory over Bayer Leverkusen at Hampden Park.

It was a goal that shook football to its core, with the French legend’s balance and technique just perfect, the ball almost sparking into flame as it shot towards the top corner of Hans-Jorg Butt’s net.

Only Iker Casillas remained from the squad that triumphed that evening in Scotland, and it was he that held the giant trophy aloft to the joy of his teammates, Real hierarchy, and the millions of Los Blancos fans around the world.

Check out the list of Real Madrid’s 10 European Cup triumphs below…. 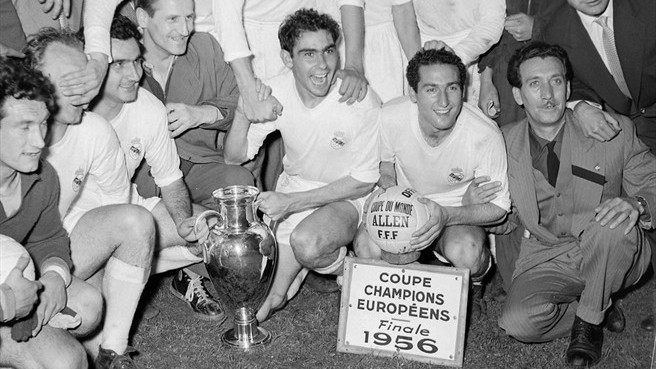 Los Blancos fought back after being behind after an hour played, with Argentine duo Hector Rial and Alfredo Di Stefano scoring the crucial third and fourth goals.

Did you know: The referee on the day was an Englishman, by the name of Arthur Edward Ellis. 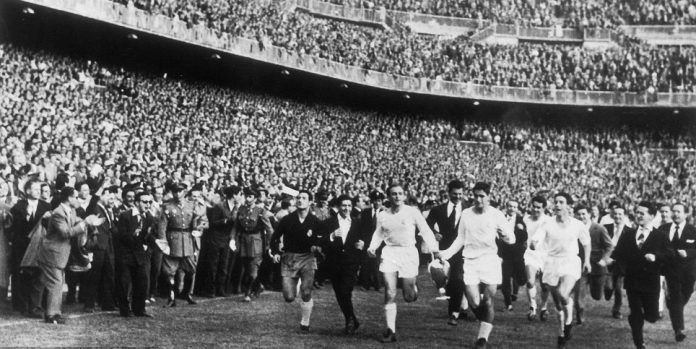 Trophy number two came at the expense of Italian side Fiorentina, with Di Stefano getting the first goal for Llorente’s side. The Real legend picked up the Ballon d’Or that year for his efforts.

Did you know: Great name here – Claudio Bizzarri played for Fiorentina during the defeat! 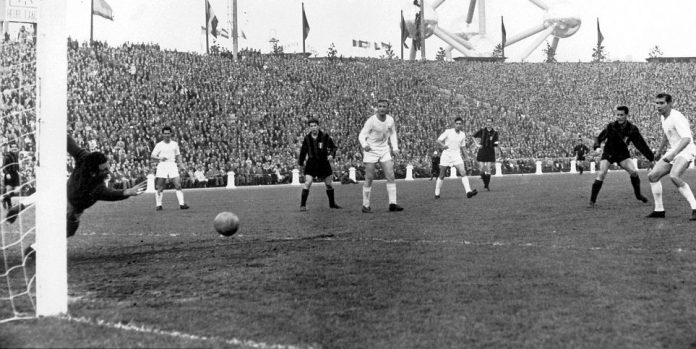 Real, under the stewardship of Argentine Luis Carniglia, were pushed right to the limit by AC Milan, who took Los Blancos to extra time, only for Francisco Gento to fire in the winner in the 107th minute.

Did you know: Cesare Maldini, father of Italy and Milan legend Paolo, played at centre back for the Italian side in this match. 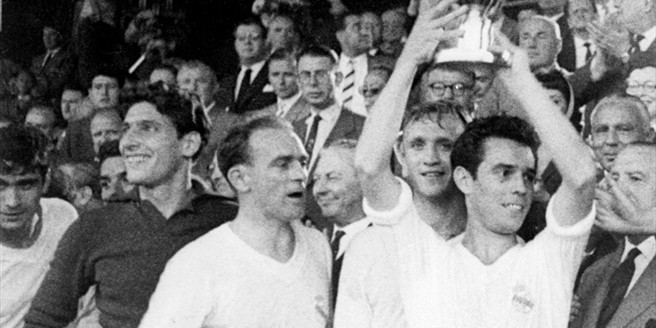 A rematch of the very first European Cup final saw Stade de Reim fronted by the formidable Just Fontaine, but that man Alfredo Di Stefano stole the show once again, with Real picking up their fourth consecutive trophy.

Did you know: French legend Fontaine holds the record for most goals scored in a single World Cup campaign. 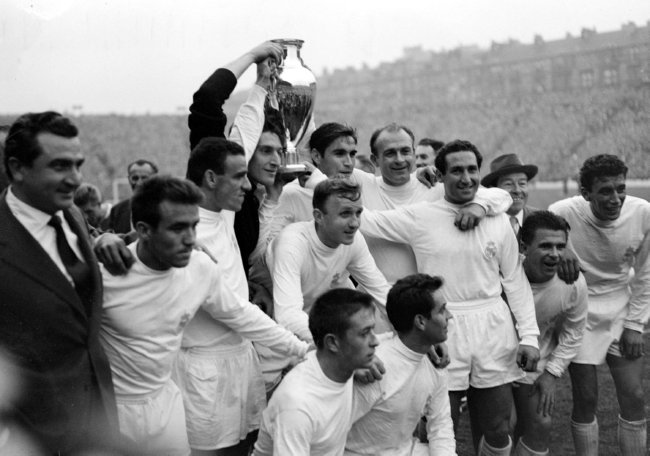 Glasgow witnessed quite a feat in European competition, with Real smashing seven goals past German side Eintracht Frankfurt to claim their five European Cup on the trot.

Did you know: This was the first time a Greek club participated in competition, with Olympiakos losing out to the previous year’s finalists Milan in the first round. 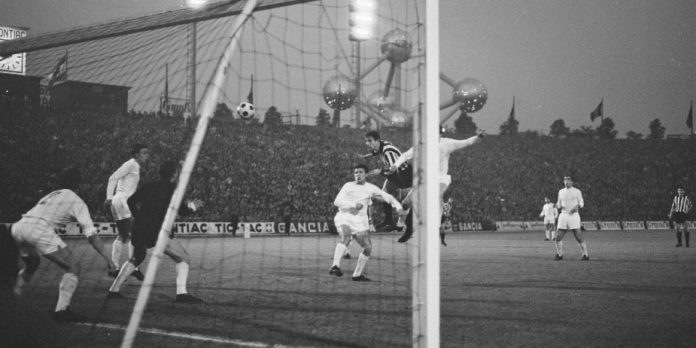 Migel Munoz’ side fell behind to a Velibor Vasovic goal just before the hour, but fought back courtesy of Amancio and Fernando Serena to end their six year wait to become champions of Europe again. 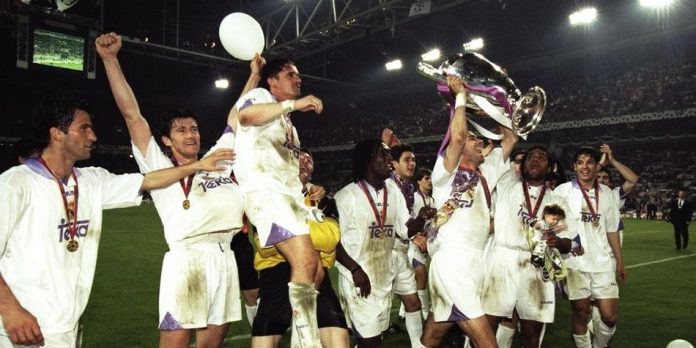 The 43rd season of the European Cup, and the sixth since it was rebranded as the UEFA Champions League, saw Real Madrid reclaim the trophy after 32 years of waiting, overcoming Juventus thanks to a late goal from Predrag Mijatovic.

Did you know: Future ‘Galactico’ Zinedine Zidane was playing for the beaten Juventus here.

An all-Spanish Champions League final saw Real brush aside Valencia in a decidedly one-sided affair in France. It was the first time two teams from the same country contested the final.

Did you know: With the victory, Steve McManaman, who scored the second goal for Real, became the first English player to win the trophy with a foreign club. 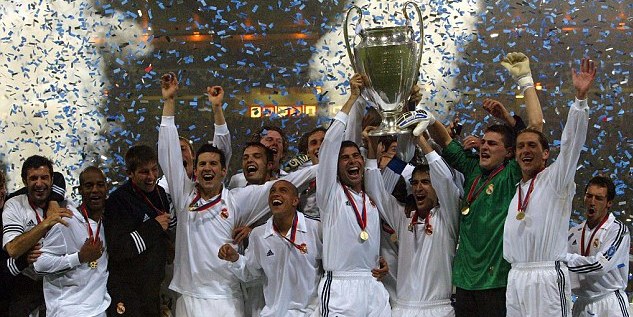 The famous Zidane volley saw off a plucky Leverkusen in this final, ensuring Ol’ Big Ears was Real’s once more. It did however mark the start of the 12 year wait for another final appearance, with the club struggling to be authoritative both at home and abroad in light of Barcelona’s modern day omnipotence.

La Decima finally arrived here in Lisbon, and to beat bitter rivals Atletico Madrid in the process was the icing on the cake!

Having fallen behind to a first half Diego Godin header, Real fought back to force extra-time thanks to Sergio Ramos’ late, late header.

A cute header from Gareth Bale saw them take the lead on the 109th minute, before Marcelo and Ballon d’Or holder Cristiano Ronaldo netted to kill off Atleti, and secure the club’s tenth European Cup success, ending their long wait to become undisputed kings of Europe once again.

Did you know: In beating Atletico in the 2014 final, Carlo Ancelotti became only the second man to win the trophy three times as a manager along with former Liverpool boss Bob Paisley. 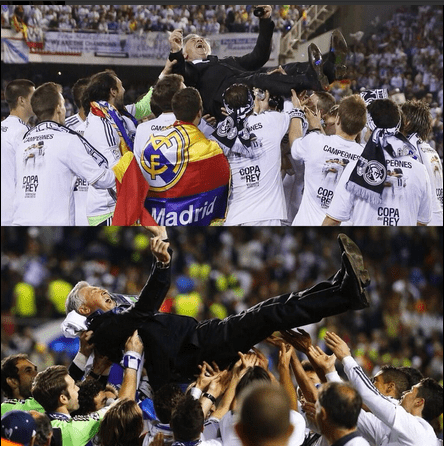