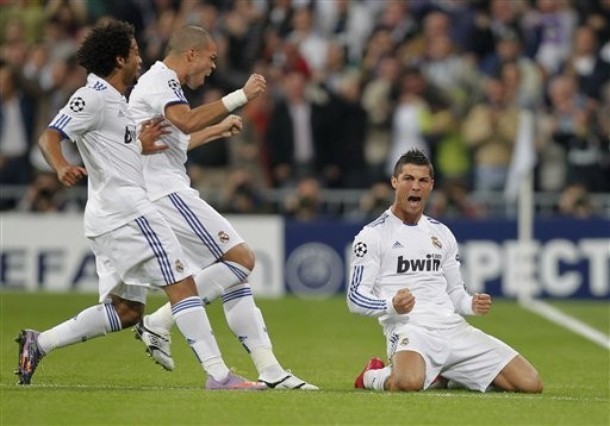 Jose Mourinho pointed out this fixture as being pivotal for their Champions League qualification and his troops lived up to the billing with their performance of the season as they downed the  Milanese giants by two goals to nil.

Both sides were seemingly playing a game of chess during the opening sparring of the game. Real pretty much dictated the majority of the possession with Milan sitting back and trying to work their magic on the counter.

The games first real opportunity arrived within six minutes as di Maria blasted his shot over Amelia’s goal after a wonderful jinked run down the left from Cristiano Ronaldo.

The Portuguese superstar, who lives for the big occasion, already demonstrated his capabilities with a number of flicks and tricks that were truly troubling Rosseneri right back and former Barcelona man Gianluca Zambrotta.

Ronaldo’s presence was certainly disrupting Milan as Gennaro Gattusso partnered Zambrotta each time he received the ball to try and dispossess him – but there was little they could do as he blasted Real ahead.

Alexandre Pato for a relatively young age should be experienced enough to know not to concede silly free kicks. He bundled over Xabi Alonso in the middle of the ‘D’ with Ronaldo subsequently drilling the ball through a lethargic Milan wall which disintegrated even before the ball left his foot.

Despite a lapse in concentration for the opener there was little the visitors could do a minute later as Mesut Ozil’s deflected effort off Bonera eluded Amelia and sailed into the net. Ronaldo once again dictated play producing a trademark run down the left who then pulled the ball back for the German playmaker to try his luck.

Il Diavolo were left flabbergasted and couldn’t settle into any sort of rhythm nor produce a consistent run of passing which we are accustomed to from the Italian side. Instead they opted to sit back and allow Madrid to have the majority of the ball – with relative ease with the Italians tending to usher little pressure.

Higuain really should have wrapped it up on 23 minutes as he headed over Marcelo’s cross – which he should have at least got on target.

Andrea Pirlo produced a trademark set piece as his goal bound free kick was denied by a stunning save from Iker Casillas who tipped it onto the crossbar.

Seedorf soon after really should have pulled one back as he found himself in acres of space after Ronaldinho’s vision spotted his run and provided a stunning ball only for the Dutchman to fluff his lines and blast the ball over the bar.

Los Blancos looked in total control working their magic on the counter with Ronaldo and di Maria providing the pace.  Ronaldo himself looked as if he was carrying the team on his shoulders and produced a fine save from Amelia as he sliced his way through the middle of Milan’s midfield and bamboozled Nesta with a double feint but was denied by the on-loanee between the sticks who parried his driven effort.

Mesut Ozil who himself was largely influential played a great one-two in the box with Ronaldo but was denied again by the Milan stopper.

The second half pretty much resumed how the first concluded with Madrid carving out opportunities and orchestrating the play in possession. Angel di Maria really should have made it 3-0 but his eccentric flick following a wonderful ball from Higuain lacked conviction, resulting in an animated grumble from Coach Jose Mourinho.

Milan in truth were hugely disappointing creating very little at the forefront. Ibrahimovich’s influence was limited and didn’t receive any such service from his colleagues as they struggled to retain possession nor produce any such spark. They looked lethargic and out of sorts – something that they haven’t been in Serie A up until tonight.

Los Blancos continued to maintain their dominance but were squandering chance after chance – notably Ronaldo who scuffed and mistimed his judgment on the striking of the ball just outside the box on 70 minutes. He really should have scored and wrapped up proceedings.

Ronaldinho wasn’t demonstrating anywhere near the exploits he had this time five years ago during his days with Barcelona where he received a standing ovation from the Madrid faithful after a master class that put the Whites to the sword. No such occurrence on this night and was replaced by former Madridista Robinho who was roundly booed after his acrimonious departure to Manchester City two years ago.

Another ‘could of’ moment for the home side as Pepe seemingly missed an open goal after Ronaldo’s blocked free-kick fell to his stumbling feet – only to see his effort squirm agonisingly wide.

Milan seemed to find a burst of energy in the final quarter of the game with Robinho’s introduction along with Kevin Prince Boateng making a difference.  Ibrahimovich had a great chance with ten minutes to play and Brazilian Robinho produced a fine save from captain Casillas with a half volleyed effort.

That was about as good as it got for the visitors as Madrid saw it through. It was a wonderfully polished professional and performance by the La Liga leaders. Mourinho’s only concern will be the lack of finishing and capitalisation of chances – but only a slight room for thought for the Portuguese. He along with those affiliated with the club will be hugely confident and optimistic over their potential for capturing major honours this campaign. They are by no means the finished article but are certainly setting an early trend.

As for Milan they will look to rebuild for the return fixture at the San Siro in two weeks time. Had they seen out the opening twenty-five minutes and didn’t lapse any such concentration in the prevention of goals then it would of been interesting to see how proceedings had faired. They look a far more capable outfit this term under Allegri despite this setback but they too have plenty to be optimistic about.