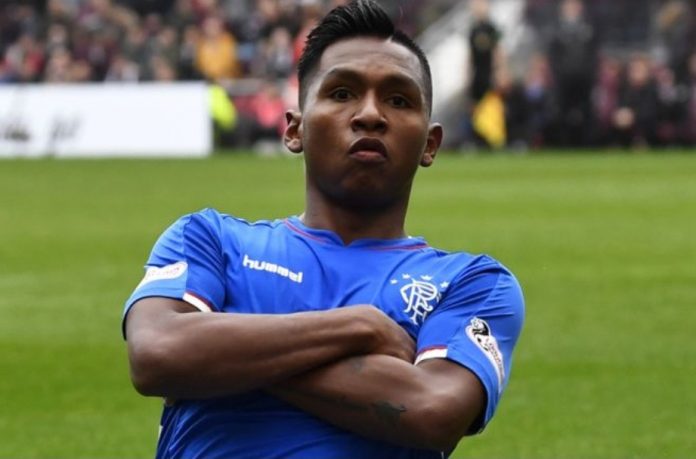 Rangers striker, Alfredo Morelos would love the opportunity to display his goal scoring prowess in the Premier League, report the Daily Express.

Morelos has been in sparkling form this season, as Rangers bid to offer serious competition to holders Celtic, for the Scottish Premiership title.

The Colombian has netted 20-times in 33-appearances in all competitions this term. Beating last season’s haul of 18-goals, with half of the season still remaining.

Rangers boss, Steven Gerrard is keen to keep his marksman, but admits he would be shocked if the Glasgow club don’t receive interest during the transfer window. The ex-Liverpool captain said:

“I’m expecting a bid for Morelos, he is a top player who has scored 20 goals”

The 22-year-old himself has admitted that there is interest expected for his services. He said:

“It’s very likely there are several teams looking at me and that there will be offers, but there is nothing concrete yet, I have to wait until the last game of the year is played and I will try to end 2018 in a positive way”

“My dream is to play in the English Premier League. It’s very similar to the football in Scotland.”

Morelos has only been capped once by Colombia. He would have to become a regular for his national team to increase his chances of gaining a work-permit to realise his dream of moving South of the border.

Any bid would need to be a significant amount. Following a bid from Bordeaux last summer. BBC Sport reported The ‘gers received a bid of £3.75m. However, Gerrard revealed the bid was nowhere near what the club would expect to receive for him.

“The message to Bordeaux is we don’t want to sell, If they want the player then they need to show some respect and come blow us out the water with a massive, massive bid. Otherwise don’t pick the phone up.”

That was nearly six-months ago. Following his form this season, the Colombian youngster has seen his stock rise.

For now, Rangers will want their key man ready for the weekend. A big performance against rivals Celtic, would make Morelos indispensable to Rangers title fight. It would also increase the interest in his services.