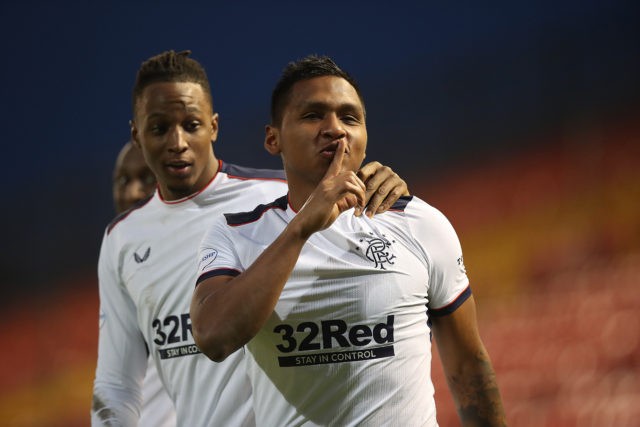 Rangers boss Steven Gerrard has said that Alfredo Morelos has really impressed him in training after the Ibrox club won 2-1 against Aberdeen on Sunday.

The 24-year-old, whose future looked away from Ibrox during the summer, has managed 10 goals this season in all competitions.

The Colombian striker scored in either half as Rangers moved 22 points clear at the top of the Scottish Premiership table.

The Gers have now made it 15 league wins in a row as they bid to win their first top-flight title since 2011, and the Rangers boss has hailed him as ‘outstanding’ after his performance yesterday.

It was indeed a man-of-the-match display from the Colombian, and Gerrard was full of praise for him. He has challenged the striker to keep firing from now until the end of the season.

What has really impressed Gerrard is that Morelos has been training really well and that he is really working hard.

“He is training well and I think today’s performance has come on the back of him working really hard,” said Gerrard as quoted by the Scottish Sun.

“We need him firing from now until the end of the season and if we do it will certainly be a huge help to us.

“When you are lacking a bit of confidence and the goals are not coming you sometimes to further away from the goal as a striker instead of going the other way.

“Credit to him. Outstanding and deserves his man of the match.”

Morelos has been arguably one of the best strikers in the Scottish league. Over the past two seasons, he has scored the bulk of goals for Rangers, and the club were over-reliant on him for goals.

However, following the arrival of Kemar Roofe, such a dependency factor has been reduced. However, Morelos still remains a key player for the Gers, and his scoring form would be vital as Rangers would be looking to prevent Celtic from winning 10 league titles in a row.

In recent transfer windows, Morelos was heavily linked with a move away from Ibrox, but with most clubs in Europe struggling financially due to the pandemic, it is highly unlikely that anyone would be interested to pay a high transfer fee to sign the striker.