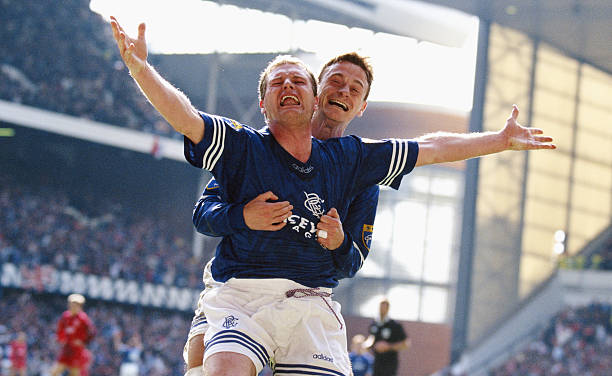 Rangers host Celtic on Sunday in a top-of-the-table clash between the Scottish Premiership giants, and after winning two of their last three Old Firm clashes, Steven Gerrard’s men will fancy their chances at Ibrox.

Both teams have won all three of their league games of the new campaign, and weekend’s result could have a huge say on the title race this term.

Stopping Celtic from getting close to that ten-in-a-row dream remains Rangers top mission, and Sunday could be their best chance to make a statement of intent.

The Light Blues ran out 2-0 winners when the Hoops came visiting in May, but it had no effect on the title race.

Rangers also won 1-nil at home in December, and will be looking forward to doing it again.

Club legend Paul Gascoigne has backed them to do so, and Rangers fans will love what he has tweeted ahead of the derby.

Hi ❤️💙looking forward to a fantastic wk back in Glasgow&hopefully to a GERS win 👍💙miss the atmosphere and excited to be back in Scotland with @mandnmanagement #ibrox #paulgazza see yous soon love from GAZZA 💙❤️🤗xxhttps://t.co/i2KhbP9fIz pic.twitter.com/dBJq7wtW6V

The Three Lions hero helped Rangers to two league titles, a Scottish League Cup and Scottish Cup during three seasons at Ibrox, and he remains a huge favourite with the fans.

The Gers narrowly saw off St. Mirren at the weekend through a brilliant Borna Barisic free-kick, and they will definitely be buzzing ahead of Celtic’s visit.

The Bhoys top the league due to their superior goal difference, and a fierce clash is expected when both sides take to the pitch at Ibrox on Sunday.