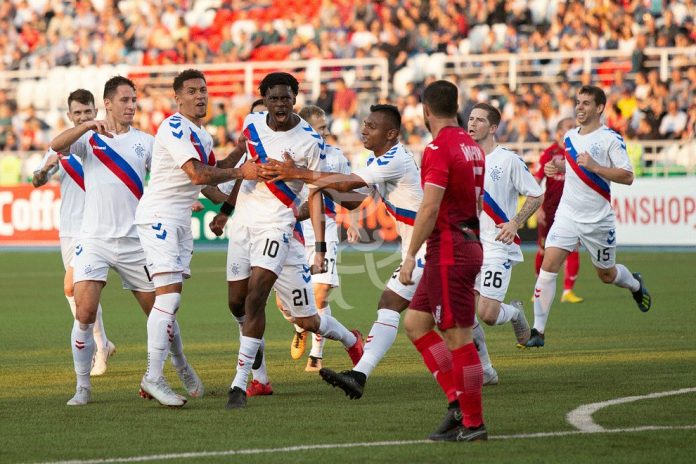 Rangers booked their place in the group stages of the Europa League with an aggregate win over FC Ufa.

The Scottish giants had won the first leg 1-0 at home and they managed to secure a 1-1 draw in the away leg earlier today.

Steven Gerrard’s men were down to nine men after Morelos and Flanagan picked up red cards for the visitors. However, they managed to hold on and secure their place in the group stages of the competition.

Rangers have had disciplinary issues this season and it will be interesting to see how Gerrard deals with it. The Scottish side cannot afford to pick up so many suspensions if they want to succeed this season.

A goal from Ovie Ejaria gave Rangers the lead early on in the first half and Dmitri Sysuev scored the equalizer for the hosts.

Important saves from Allan McGregor kept Rangers in the game and they will be delighted to have secured European football for the first time since 2010.

Steven Gerrard’s men will be looking forward to the derby against Celtic this weekend.

Here is how the Rangers fans reacted to the win earlier.

Still undefeated under Gerrard, Morelos mustn’t start at the weekend, too much of a liability.

Well done gers. Those boys didn’t half put in a shift massive Credit to Goldson and Katic in that second half. COLOSSUS the both of them.

This is a truly epic result. Rangers have won the battle of Neftyanik. What a save by McGregor. This is a great Rangers team in the making. So proud. Special mention for Halliday. Really glad we kept that lad. Morelos still needs to be spoken to though.

Superb result against all the odds.

Fucking heroic….longest half of football I’ve ever sat through but would be shocked if we get anything on Sunday now unless coulibally is back

Ive never been so stressed and happy at the same time. Great fight boys. WATP ⚽️❤️