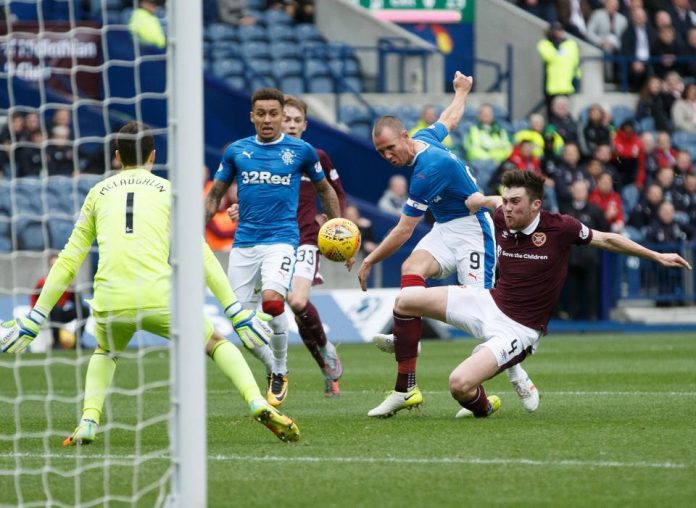 Glasgow Rangers returned to winning ways on Saturday with a much-needed 3-1 victory over Hearts.

The clash at Murrayfield was the first game since Pedro Caixinha’s unceremonious sacking, with Graeme Murty taking charge of the Gers on a caretaker basis.

The stand-in manager’s team selection raised some eyebrows, with Kenny Miller recalled to the side’s starting line-up after a period on the sidelines.

The veteran centre forward had a high-profile falling out with Caixinha and the Portuguese trainer banished him to the fringes, but Murty called on the ageing attacker in the game in Edinburgh.

Miller showed that he can still have a sizeable role to play for Rangers, scoring twice in the 3-1 victory and putting in an impressive performance upon his return to the fray.

The 37-year-old has split the Gers fans of late, with some opting to side with Caixinha over the perceived lack of respect the former Celtic striker showed the former manager and the club.

However, others were glad to see Miller back in blue and hailed his performance against Hearts.

The win in Edinburgh moved Rangers up from fourth to third place and reducing the gap between the Ibrox outfit and fierce rivals Celtic to six points.

With Partick Thistle at home next up for the Light Blues, it will be interesting to see the role Miller plays once again, with the Gers supporters rallying around their attacker after his heroics on Saturday.

As long as you pull through. Glad to see Miller back on the score sheet.

Hi ya all, this is me…Kenny Miller the "leak" "grass" "trouble maker" some of the names hes been called, all i c is a man who cares 4 RFC💙 pic.twitter.com/cyiBWvuAIR

Much better, grit, determined and looked dangerous on the counter. MOTM Miller, but could have been Holt, Morelos or Candieas #RFC 🔴🔵

We are a better team with holt in midfield. Miller outstanding today, morelos movement outstanding a young Ross was fantastic. #RFC