Rangers have extended their lead at the top of the Scottish Premier League after a comfortable 3-0 win over third-placed Hibernian at Ibrox this afternoon. The Gers went into this one after Celtic’s draw at Pittodrie knowing a win would move them that step closer to the Championship. Hibernian started this one very positively, and Alan Gow was the second-striker behind Anthony Stokes as Derek Riordan was on the bench. 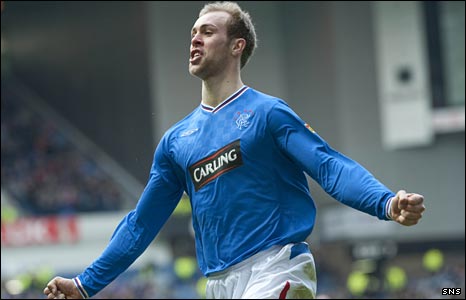 The first-half was more of a battle than a football match with the main centre of attention being referee Steve Conroy, who had an absolutley awful match. The only real chance of note in the first-half was for the opposition when Merouane Zemmama’s corner was met by Paul Hanlon who was unmarked at the back post and his header was cleared off the line. As the game grew even more tense towards half-time, the referee handed bookings to Chris Hogg, Kris Boyd and Kevin Thomson and even stopped the game for someone having the ball hit off their face – laughable.

Walter Smith made the only half-time switch by taking off DaMarcus Beasley who had just returned from injury and replacing him with Northern Irish International Kyle Lafferty. It was the sub who tested Graeme Smith early in the second-half with a long range effort after cutting inside from the left. Five minutes after the break, the Gers went a goal infront when Kyle Lafferty’s pass was picked up by Whittaker who drove forward and made a one-two with Lafferty before firing the ball straight into the top corner. Hibs began to push men further forward and were inches away from equalising when Zemmama’s deflected shot was saved by McGregor but the ball seemed to squirm away from the Rangers goalkeeper and he had to show good reactions to stop any danger.

The Champions sealed the game with a second goal after 72 minutes from Kris Boyd who blasted home his 21st goal of the season and his 99th SPL goal for Rangers. Kenny Miller was brought down in the box by Sol Bamba who tripped the Rangers striker and Boyd stepped up to fire low and hard into the corner. The spaces began to open which suited players like Steven Davis and Kenny Miller but it was Kevin Thomson who was the star performer today in my view, he was dynamic, tidy, aggressive and got from box-to-box all game. Excellent performance. It was the former Hibernian midfielder who set up the third goal thanks to a slip from Kevin McBride and he squared it to Miller who slotted home.