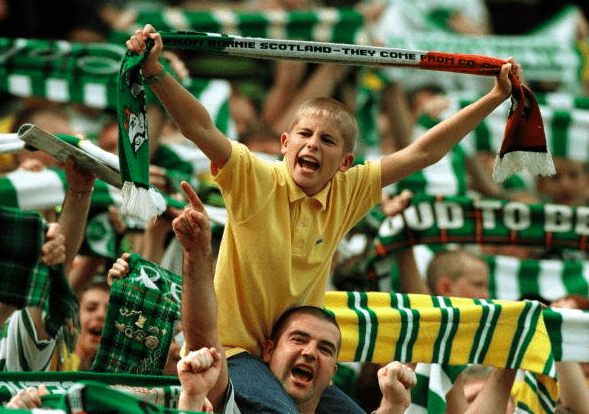 The rivalry between Glasgow clubs Rangers and Celtic, popularly known the “Old Firm” is historically tied up in religion and subsequently politics. Sectarianism in Glasgow takes these forms, and the fierce rivalry between Celtic F.C. and Rangers F.C. only reinforces the same.

Celtic was founded by Catholic immigrants, while Rangers has always been perceived as the “Protestant club”. In fact, up until 1989, when Mo Johnston signed for them, Rangers had never fielded a high-profile Catholic player.

The two clubs share a long and passionate mutual enmity that transcends the sporting arena. Undoubtedly, this is one of the most heated rivalries in the world. Games between these two sides are full of passion, on and off the pitch.

Old Firm matches have always been anxious events, and the sectarian songs and chants, some of which contain the vilest lyrics, help stir up the mutual abhorrence between the supporters on each side.

In the Rangers’ first visit to Celtic Park in four years, Brendan Rodgers’ Celtic team defeated the Gers’ embarrassingly, with a scoreline that read 5-1. Young Moussa Dembele performed incredibly well, scoring a hat-trick and setting up another goal. Unfortunately, the performance of Rodgers’ men was overshadowed by other off-pitch events.

After all, this is a match with a history like no other.

From underneath the terrace at Celtic Park, a banner hung, reading, “This is it Bhoys, this is war”, with two blow-up dolls – one wearing a Rangers scarf, the other an Orange sash. There was a rope wrapped around their necks, and their arms were tied behind their back. They were strung up from the upper tier. The effigies weren’t the only offensive items present. The home fans unveiled a banner which read “Know your place Hun scum.”

Unsurprisingly, the Rangers fans have complained since. This has led to the club releasing a statement wherein they say:

“The club’s directors are fully aware of the disgust felt by Rangers supporters who were subjected to a sickening and shameful display of outright sectarian hatred towards them.

“We also share the fans’ anger and will be contacting Club 1872 as a matter of urgency.”

The Rangers supporters now want their rivals banned from making the return visit on 31 December.

The club’s supporters group said: “Club 1872 has reviewed pictorial and video evidence of the disgusting behaviour of sections of the Celtic support during the Old Firm game on Saturday.

“In light of this, we have today written to the Rangers board requesting that they ban Celtic supporters from Ibrox until Celtic can prove that they have taken substantive action against the Green Brigade and other overtly sectarian elements within their support.”

Rangers fans, however, weren’t ones who took a high road after the defeat. There has been footage released which reveals some fans trashed the toilets of Celtic Park. In the footage, posted onto social networks, men can be seen shattering sinks, destroying toilets and pulling down parts of the ceiling.

A Celtic spokesman told the Daily Record, “Celtic will not become involved in a tit for tat spat regarding all events at Celtic Park on Saturday. We will deal with all issues arising in a proper and professional manner in line with our well-established policies.”

The Old Firm derby has seen these instances far too often. Hooliganism isn’t an unknown occurrence in Scotland when it comes to football.  Celtic and Rangers’ supporters have been known to break the law. It will be interesting to see if either side does something about their set of fans, the likelihood of which seems bleak.