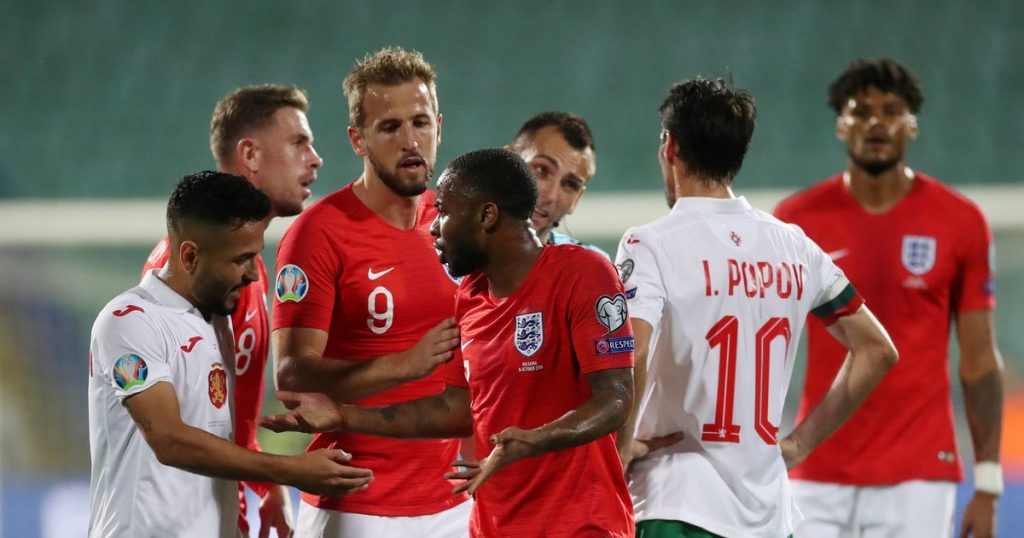 As our focus now turns back to club football and the chaos, drama and excitement that brings, let’s not forget the horrific scenes that unfolded in Bulgaria’s capital Sofia during the last round of international fixtures. England beat a dreadful Bulgaria team 6-0 but the score was simply an irrelevance. The consistent, vociferous and unimaginable racist abuse by some Bulgarian fans towards England’s black players was the story-line of the match.

England arrived to the game with concerns that racist abuse would happen. Gareth Southgate and some of his players including Tyrone Mings mentioned it, in detail, in pre-match interviews. They said the team had a plan in place if it happened but didn’t disclose what that plan was. In hindsight unfortunately, the plan was in effect: complain about it but get on with it.

First time the game was stopped

The racist monkey chants started almost immediately from kick-off. The first time Mings, Raheem Sterling and Marcus Rashford in particular, touched the ball the monkey chants were clearly audible. This continued throughout but it was not until the 27th minute that the match was stopped for the first time. The referee spoke to Harry Kane, the England captain, a number of the England players and staff including Southgate as well as the Bulgarian manager and other match-day and UEFA officials.

This led to a tannoy announcement that the racist abuse must stop. During this stop in play many Bulgarian fans were booing this decision.  TV camera’s also spotted a number of Bulgarian fans doing Nazi salutes and one fan holding up a t-shirt emblazoned with the caption ‘No Respect’. This was mocking UEFA’s respect campaign. Once the announcement was made the players returned to the field and the game restarted.

Second time the game was stopped

Despite the game restarting the racist chanting did not subside. It continued, with England’s black players having to endure more of this appalling abuse. Southgate then took matters into his own hands and made another complaint to the fourth official in the 43rd minute. The game was stopped again with more discussions had between the officials, Southgate and some of England’s players.

Bizarrely during this stop in play around 50-100 Bulgarian fans, many of whom had committed these racist acts up and left the stadium. It was not clear why but it was almost if they had thought to themselves: our work is done, lets go.

After a few minutes the match started again. No more stoppages due to racist abuse occurred in the second half.

Where the England players went wrong

After the first stoppage for racist abuse the England players should have walked off. Let alone after the second stoppage for racism. The players failure to take matters into their own hands and walk off was the wrong statement to make. In effect, staying on the pitch gives credence to the ridiculous notion that black players should just ‘put up with it and get on with it’.

Should a person who has been cheated on by their partner stay with them? No. They should walk away from the relationship and make a statement by doing so. Underlining that the actions of their partner were wrong. Instead if they stay with the cheating partner and put up with that behaviour that encourages the partner to do it again. This is because they are telling the cheating partner their behaviour was ‘not that bad’. The same applies with racist abuse of footballers. If they don’t walk off, it shows they consider it to be ‘not that bad’. Therefore, encouraging the culprits to do it again.

Please ignore ITV and other media outlets promoting the England players actions as wonderful. It simply wasn’t. With the exposure the England players had to a worldwide audience it was the perfect opportunity to make the right statement. They failed miserably.

The next time a player or players from any team are the subject of racism they need to grab the ball and walk off the pitch. Racist abuse of players has gone on for far too long and needs to be stopped. The player or players of a team who walk of, especially in a high profile game such as a Premier League, Champions League or international fixture, will become iconic.

It almost happened back in 2006 when Samuel Eto’o said ‘No Mas!’ during a match against Real Zaragoza when he was the subject of racist abuse and attempted to walk off the pitch. However he was stopped by teammates and convinced to continuing playing. This could have been the seminal moment when racism from fans was finally taken seriously in football but it wasn’t.

13 years on and nothing has changed.

Walking off the pitch would create an iconic image of ‘enough is enough’, like Colin Kaepernick kneeling during the USA national anthem prior to NFL matches to protest police brutality against people of colour or Tommie Smith and John Carlos raising their black gloved fist’s at the 1968 Mexico Olympics to protest the terrible treatment of black people in the USA . Such a statement would force the footballing authorities to act and make those performing the racist chants realise what they are doing is unacceptable and inhumane.

Until that happens things won’t change.

What UEFA and the football authorities need to do

After such a galling episode of racism towards black players UEFA and football authorities worldwide need to step in and protect them. These footballing authorities should immediately implement new, harsher sanctions to punish nations or clubs whose fans engage in racist behaviour.

This is the four stage process for dealing with incidents of racist abuse that footballing authorities worldwide should enact:

This procedure would give black players confidence that racist abuse directed towards them is being treated seriously. It would also encourage nations and clubs whose fans have engaged in racist acts in the past to be more proactive in preventing the racist elements in their fan-bases from attending matches.

Without such punitive sanctions racism will continue to blight football globally and another generation of black players will feel under-supported and isolated.