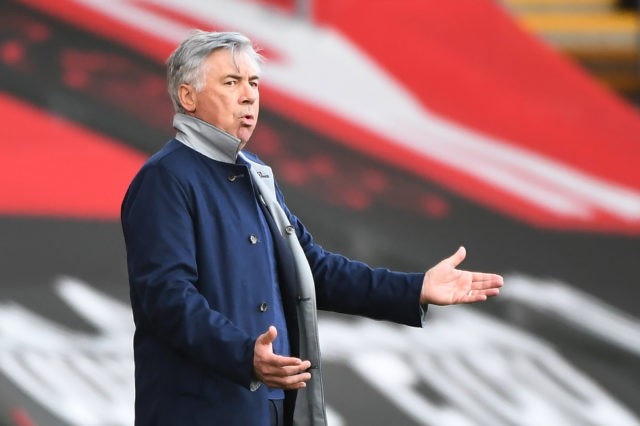 Everton will travel to Craven Cottage to face Fulham on Sunday, and you can watch this and other Premier League games live online.

Tv Info: The match will be televised live on BBC One. UK viewers will be able to watch the match online via BBC iPlayer.

The Toffees lost three games on the bounce prior to the international break, and Carlo Ancelotti’s side will be looking to get back to winning ways when they face Fulham who are 17th in the league table and have picked up only four points from their opening eight games.

Here is the team we think Ancelotti will select for this game.

Goalkeeper: Jordan Pickford, Everton’s first-choice goalkeeper, has been very inconsistent this season and has faced criticisms from fans and pundits alike. Although Ancelotti dropped him once (against Newcastle United), he retains the trust of his manager and should continue between the sticks.

Defence: Ancelotti has confirmed today in the press conference that Seamus Coleman will miss the game through injury (hamstring). Ben Godfrey and Mason Holgate could play at right-back, while Jonjoe Kenny remains another option.

Yerry Mina is likely to return to partner Michael Keane at the back, while Lucas Digne will take up the customary left-back role.

Midfield: Brazilian midfielder Allan was an unused substitute after picking up a knock against Ecuador but he has been cleared as fit to play. Ancelloti could bring back Andre Gomes into the starting line-up in place of Gylfi Sigurdsson, who struggled to make an impact during Everton’s 3-1 defeat against Manchester United prior to the international break.

Forward: The Toffees boss has confirmed today that Richarlison – who was a subject of a dangerous challenge from Uruguay’s Edinson Cavani and was forced off for Brazil – is fit to play against the Cottagers, and the 23-year-old winger is likely to replace Bernard in the starting line-up.

James Rodriguez – who penned a clarification letter denying reports of a dressing room bust-up – is set to start alongside the in-form striker Dominic Calvert-Lewin.