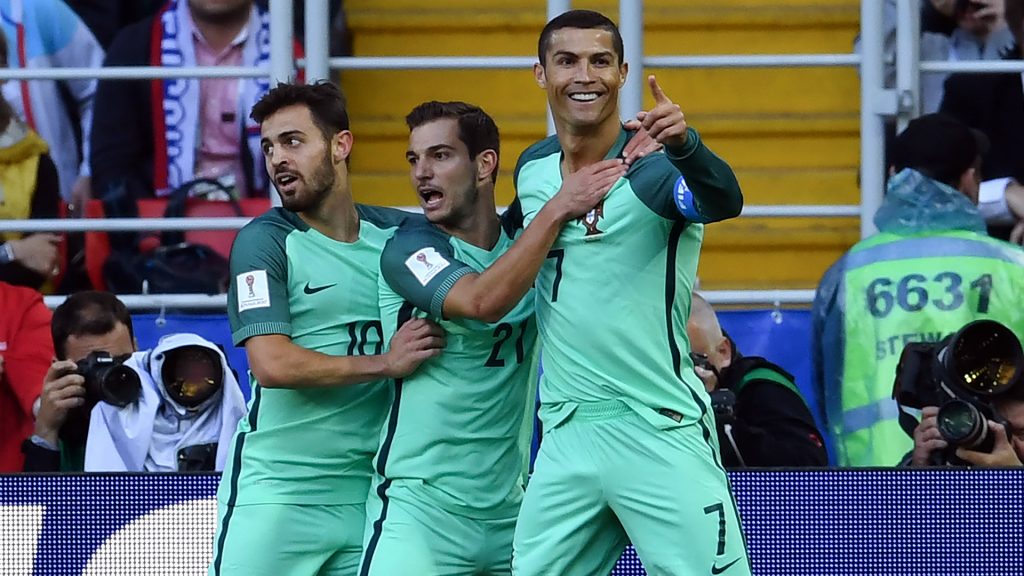 European champions Portugal enter the World Cup looking to build on the heroics of two years ago, but the squad travelling to Russia is significantly different to the one that tasted glory in France.

Coach Fernando Santos has axed ten of the group that won Euro 2016, but there is plenty of attacking talent available to him ahead of the Iberian nation’s opening Group B clash against rivals Spain.

With Cristiano Ronaldo at the forefront of Portugal’s chances, the European nation is an unpredictable entity to some degree.

The Portuguese 23-man squad is loaded with exciting attacking players – the problem Santos will have is finding a blend that suits.

There are plenty of experienced campaigners in the group, especially in defence, and the starting XI on paper looks very strong.

Santos admitted difficulty in settling on his final squad and little wonder given the array of options in attack and wide areas.

Portugal travel to Russia without a handful of players employed by top European clubs, with Barcelona’s Andre Gomes the biggest name missing the cut.

Nani, Bruma, Renato Sanches, Ruben Neves, Fabio Coentrao, Nelson Semedo and Joao Cancelo are all very gifted players but will watch on from the sidelines after being overlooked.

The 63-year-old’s appointment as Portugal manager back in 2014 was treated with disappointment in some corners, with the former Greece head coach perceived as negative in his playing style.

However, Santos led his homeland to European Championships glory two years ago in his crowning achievement of an impressive career.

Having refined the group over time he knows the players well, but has a job on his hands to manage a lot of big egos and mercurial talents.

Santos has always based his sides around a solid defence and Portugal will be relatively compact without the ball this summer.

In a fluid 4-2-3-1 formation that can morph into a 4-5-1 or 4-4-2 dependent on the opposition and how a game is going, there is experience throughout the spine of the side.

It will be interesting to see how Santos looks to get the best from Ronaldo and whether the Ballon d’Or holder starts as Portugal’s central striker or in a slightly withdrawn role behind Andre Silva.

The Real Madrid superstar is Portugal’s captain, record goalscorer and the player with the most international caps in the nation’s history – it is fair to say he is the overwhelming focal point for the Selecao.

At 33 this could well be Ronaldo’s last major international tournament and the serial winner will be looking to book his place in immortality by collecting the last accolade still to elude him.

However, there are signs that the devastating forward is not quite the force he once was and as such he will need to work alongside the likes of Bernardo Silva and Joao Mario for Portugal to be an effective attacking unit.

The Borussia Dortmund utility man played an important role in Portugal’s triumph at Euro 2016 and if fit and ready to play could be a critical member of Santos’ starting XI once more.

Able to play as a full-back, central midfielder or winger, Guerrero’s ability on the ball, footballing intelligence and pace make him an impressive operator.

The 24-year-old is most likely set to be used at left-back and will be tasked with providing width and quality service on the front foot.

Although Portugal have been drawn alongside Spain in Group B, the Iberian nation will fancy their chances of overcoming Uruguay, Egypt or Russia in the round of 16 – regardless of whether they finish first or second in their pool.

As seen two years ago, once this canny side get into the latter stages of a tournament they have the ability to grind out results – even when not playing anything close to scintillating football.

Any team with Ronaldo in it must be treated with the utmost respect, but an ageing central defence could well be their downfall at the business end of the competition – leading to a quarter or semi-final exit.