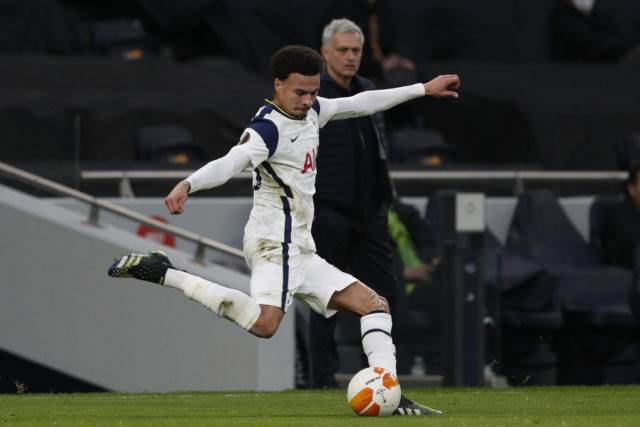 Spurs will face the Clarets in the Premier League at the Tottenham Hotspur Stadium, and Alli is expected to feature.

Alli has struggled for game time this season, making just one start in the Premier League.

The midfielder has been neglected by Jose Mourinho, and it appeared that their relationship was beyond repair.

However, Alli seems to have rediscovered his form and has looked sharper in recent games after returning from injury.

The 24-year-old delivered his best performance of the season in the Europa League against Wolfsberger on Wednesday where he scored one and provided two assists.

The goal he scored was simply spectacular – an acrobatic bicycle kick – and reminded everyone of his immense quality.

Mourinho was full of praise for the midfielder and even suggested that he expects Alli to play a prominent role going forward.

Spurs have lost five times in their last six Premier League games, and it is probably the best time to throw Alli and Gareth Bale into the mix.

However, Merson has a theory why Mourinho still won’t pick Alli. He suggests that Mourinho doesn’t want to be proven wrong.

🗣"No, because Mourinho does not want to be wrong"

Paul Merson thinks Dele Alli won't play for Tottenham this weekend against Burnley because Jose Mourinho does not want to be proven wrong pic.twitter.com/kt2ywhhN8H

He claims that if Alli plays well, Mourinho will be pilloried for not using him before.

Frankly, these are amateurish talks. Mourinho is a great manager for whom results matter more than anything else.

For him, Tottenham matters. If Bale or Alli help the team win, he will have no issues whatsoever.

Having said that, Spurs do have a wealth of attacking options, and Mourinho must start with the quartet of Bale, Alli, Son Heung-Min and Harry Kane in the must-win game against Burnley.