On the nights that testimonials are played for AC Milan’s Paolo Maldini and Real Madrid’s Raúl Gonzalez, those sitting and the stands and watching on television will be seeing the final curtain coming down on a phenomenon that appears to be on the verge of extinction: the one-club footballer (if such a term even exists).

The day in which a footballer could devote his entire career to one club is surely passing. Weeks ago, FC Barcelona’s Lionel Messi declared that his allegiances would remain with los blaugranas for the duration of his playing days.

Those were bold words issued by the 22 year old Argentine who appears to have another ten plus years ahead of him (twenty years if he lasts as long as Maldini) and who will no doubt court the attention of Europe’s highest bidders for his prized services.

Granted, when you are a player of Messi’s capabilities and hold the status as the fulcrum of one of Europe’s top clubs, you can say with some measure of confidence that you will end your career at Barcelona.

However that sentiment, as much as it now endears Messi to the Barça socios and cules, might not be reciprocated when Messi is nearing the twilight of his career.

The one club kings

Being a part of this exclusive club of players boasting to have donned the shirt of one club in their career depends on many factors, often outside the control of the footballer himself. Years back when Raúl was a precocious 17 year old striker for Real Madrid in the 1994-95 season, I remember an incident that potentially could have ended his career with Madrid as fast as it started. 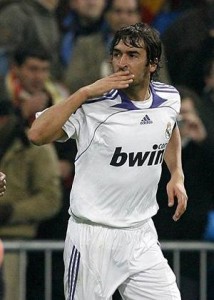 Then manager Jorge Valdano had substituted Raúl off during a league match which led to a brief spat between the two. Stories of Raúl slapping Valdano emerged although I am not certain of its veracity. Yet at the least, heated words were exchanged.

Imagine Manchester United’s Jonny Evans trotting to the sidelines to be substituted screaming a litany of sailor like language in Sir Alex Ferguson’s direction. The lad would not even be allowed to carry on as a ball boy under Ferguson’s watch.

Yet Raúl’s status with the club remained intact, perhaps because his talent was so obvious for everyone to see, including Valdano. Or perhaps because on the heels of four consecutive Spanish league titles monopolized by their eternal rivals from Catalunya, Real Madrid could not afford to lose a player of Raúl’s promise.

Just to give a story a proper ending Real Madrid pried away the league title from Barcelona in Raúl’s debut season. That he has remained a Merengue even in the lean years when Real Madrid failed to win titles is a testament to both his ability to play football, score goals (we should not overlook the fact that his 312 goals makes him Real Madrid’s all time leading scorer) and his devotion to the club.

That’s strange for a man who started off in cross-town rival Atletico Madrid’s youth system only to find his new club when the academy was scrapped by then president Jesús Gil (in hindsight this was as wise as Esau selling his birthright to Jacob for a mere bowl of porridge).

The future of Messi

Seeing how it worked for Raúl, and given the fact that Messi has come up into Barça’s first team through the ranks of the cantera (Barça’s youth system), why is Messi’s prognostication of finishing his career at Camp Nou less possible?

If I were a betting man, I would applaud Messi for verbalizing his love and devotion to the club but my money would be on a bet that Messi ends his career wearing the shirt of another club. That’s not what I personally wish, to set the record clear. Certainly even if Messi were to leave, what Barça fan would dare express any type of disdain (save if he followed Luis Figo’s footsteps)?

However, the history of FC Barcelona makes it abundantly clear that the club is never one that dwells on past glories contributed by any footballer and this in itself contributes drastically to the dwindling possibility of “one club for life.”

Case in point: Ronaldihno. One would be hard pressed to remember a time when he was the World Player of the Year, the linchpin of Barça’s attack and the engine that helped them win consecutive league titles after a barren and fallow spell given the way he was shown the back door to AC Milan last summer. And certainly there was a time when another Brazilian whose name also started with the letter “R” was the talk of Spain when Barça had won consecutive league titles back in 1997-98 and 1998-99.

Yet Rivaldo’s name has all but disappeared from the subconscious of Barça fans and even trying to remember breath taking goals, like the one he scored against Valencia while riding the proverbial “bicycle” outside the penalty area, takes a lot of effort. Even a homegrown talent like current Barça manager, Josep “Pep” Guardiola, the midfield genius that he was, ended his career in the equivalent of a football wilderness: Brescia (no offense intended but surely felt if you’re a Brescia fan).

Hristo Stoichkov? Winner of the 1992 European Cup and those legendary four consecutive league titles in addition to other honors at his time with Barça: his was a two-part departure where he first found himself in the yellow strip of Parma only to return to Barça and then leave to embark a journeyman’s end to an illustrious career at Camp Nou.

Even the legendary Johann Cruijff (or Cruyff, whichever way you prefer), with everything he had done at the club as a player and manager, found out that his employment as manager was terminated after reading one of the Barcelona dailies near the end of the 1995-96 season. Jimmy Burns, in his authoritative history of the club, “Barca: A People’s Passion,” described Cruyff’s firing poetically: as if he had been a janitor discovered sleeping while cleaning the latrines.

Just more examples that players who arrive at the Camp Nou, by way of the sensational signing by a newly elected president, or up through the ranks of the cantera, can be discarded when their expiration dates have passed. In fact, only one player comes to mind who can be considered as a player who played his entire career with Barcelona: Carles Rexach (ironically the man who was responsible for bringing Messi to the cantera). Yet his career spanned a time when multi-million dollar (or multi-billion peseta) transfers were non-existent and the notion of playing for one club your entire career was not as foreign or rare.

Should I stay or should I go?

The list of Barça’s hall of fame, other than Rexach, surely puts to the sword any hope that Messi has in remaining true to his declaration in this day and age. Part of the reason is the internal politics that is part and parcel of FC Barcelona.

With the leadership and direction of the club subjected to “democratic” elections, a new president brings in a new agenda along with a list of scapegoats for past failures. Hence with current president Joan Laporta’s election in 2003, the purging of players brought in under the horribly failed Gaspart presidency and the heralding of the new savior, Ronaldinho.

Distant memories now that can be all too contemporary when the cycle makes a full turn in Messi’s eleventh hour. Much of the engine that drives the politics of the club is attributed to the somewhat fickleness of Barça fans (self included). Today’s hero goes to zero tomorrow on the turn of a missed penalty, an unmerited red card or one off form match. The fact is that the turnstiles at FC Barcelona revolve much quicker for the sake of titles and silverware.

The same can be said of Real Madrid and those who disagree with me (hopefully respectfully) will point to Raúl’s ability to survive numerous regime changes in Madrid as well as remaining an influential figure despite the ups and downs of the club over the years.

Perhaps Raúl’s declaration that he would never play for another team in Spain won enough hearts, not only among the fans but with the board as well. Whether Messi was aiming to do the same with his statement is one left for speculation. However, if there is a player who has the credentials to break this vicious cycle employed by FC Barcelona of discarding players near their expiration date, surely it can be Lionel Messi.

However, my bet is that when we witness the testimonials for Maldini and Raúl, this rarity of “one club for life” will come to an end, with perhaps the exception of Steven Gerrard for Liverpool. Mind you, despite the dirty laundry in Barcelona’s closets, a player of Messi’s talent will be honored with a testimonial at Camp Nou.

The question is what other shirt will he be donning in the first half before he puts back on Barça’s shirt for one last time in the second half?