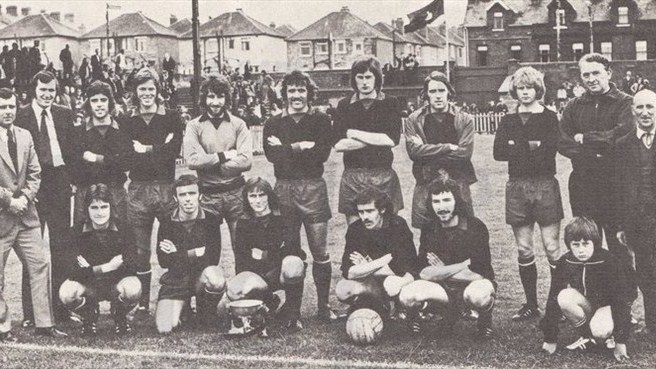 Meeting in the first round of the tournament, the Romanians won 1-0 in the first leg in Belfast thanks to a goal from midfielder Viorel Sălceanu. Interestingly, Sălceanu was not able to get his name on the score sheet in the return leg carnage in Bucharest. Dudu Gerogescu and Radu Nunweiller scored four a piece before goals from Cornel Dinu and Florea Dumitrache made it 10-0 to Dinamo.

To add insult to injury, the record setting 11th goal was scored by Crusaders’ Liam Beckett who put the ball in his own net in the 88th minute.

Pictured above is the Crusaders team of 1973.

Birth of a Swedish legend

On this day in 1981, former Ajax, Inter Milan and Paris Saint-Germain striker Zlatan Ibrahimović was born in Malmö.

He started his footballing career with his hometown club before moving to Ajax in 2001 where he won the Dutch Eredivisie title in his first season. He moved to Juventus in 2004, spending two seasons in Italy and winning the league at the end of both campaigns. Unfortunately, those titles were stripped off as Juventus faced the ramifications for their involvement in the Calciopoli scandal. With Juve relegated to Serie B, Ibrahimović signed for Inter Milan where he won three consecutive Scudettos.

His prolific form in front of goal sparked an interest from Barcelona who signed him in the summer of 2009. But the big Swede’s time in Catalonia was not as fruitful on a personal level despite winning La Liga in his first season. He moved back to Italy after just two years in Spain, joining Inter’s eternal rivals, AC Milan.

He perhaps experienced the form of his life after moving to PSG in 2012 where he won the Ligue 1 title in each and every one of his four seasons in the French capital. He joined Manchester United in 2016 and won the UEFA Europa League and the English League Cup in his first season.

Ibrahimović is also Sweden’s all time top scorer with 62 goals in 116 appearances.

On this day in 1962, the England national team played their first match in the UEFA European Championship – then known as the European Nations Cup – in a first leg qualifier against France.

Played in front of 35,000 fans at Hillborough, a Ron Flowers goal helped the Three Lions record a 1-1 draw. They lost the return leg 5-2 in Paris. Oh well.