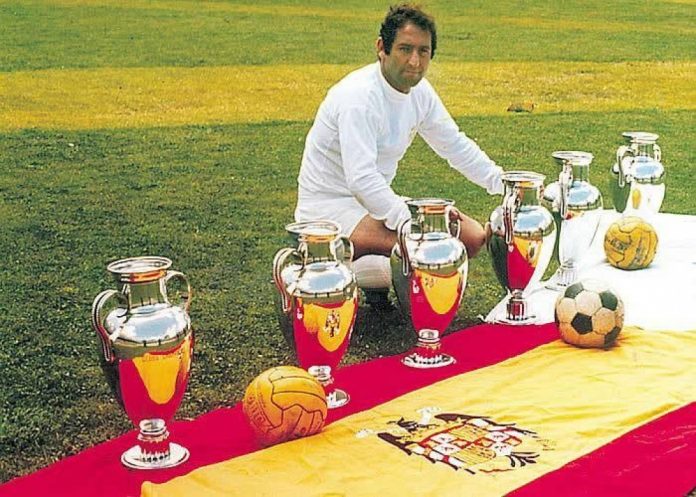 On this day in 1933, Real Madrid and Spain legend Francisco Gento was born in the village of Guarnizo in Cantabria.

Gento is the only footballer in history to have won an astonishing six European Cup titles. An outside-left by trade, Gento made his Primera division debut with Racing Santander in the 1952-53 season. An impressive first season with Los Racinguistas attracted an interest from the biggest club in the country – Real Madrid. Blessed with frightening speed and unrivalled control over the ball, Gento received the No.11 shirt in Madrid.

He won his first European Cup in 1956 in the competition’s inaugural season. Los Blancos beat French side Stade Reims 4-3 in the final at the Parc des princes in Paris. His final and record setting European victory came against Partizan Belgrade in the Heysel Stadium in Brussels. Gento played in total 89 matches in the European Cup scoring an impressive 30 goals.

His league tally is equally unbelievable. Gento played 18 seasons with Real winning La Liga 12 times. He was also a part of the legendary Spain squad that won the European Championship in 1964.

On this day in 2001, the San Jose Earthquakes came from behind to beat Los Angeles Galaxy 2-1 to win the MLS Cup at the Columbus Crew stadium in Ohio.

Galaxy took the lead in the 21st minute through Luis Hernandez. But a young Landon Donovan, on loan from Bundesliga side Bayer Leverkusen, equalised for San Jose just before half-time. The match remained tied until the 90th minute before extra time came into play. Dwayne DeRosario, a late substitute in the game, scored six minutes in to give San Jose their debut MLS Cup title.