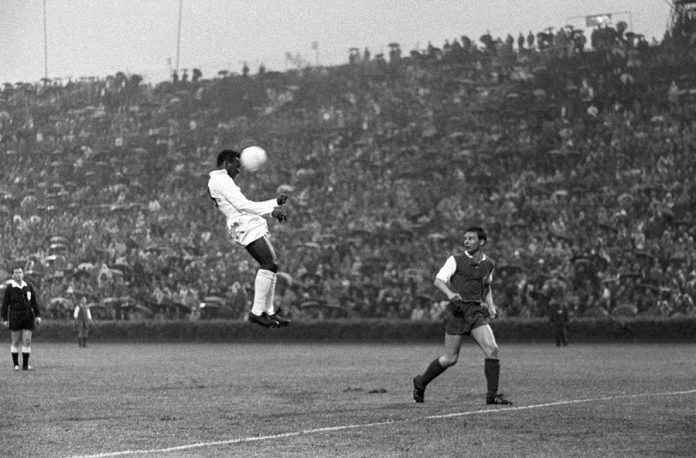 On this day in 1960, English football legend Jimmy Greaves, aged just 20 years and 290 days, scored a hat-trick in Chelsea’s 6-3 win against Manchester City at Stamford Bridge to bring his league tally to 100 goals.

In doing so, Greaves became the youngest player ever to score a century of League goals. He joined Chelsea as an apprentice in 1955 after being scouted by Jimmy Thompson.  His incredible goal return for the youth teams (51 goals in the 1955–56 season and 122 in 1956–57) was rewarded with a first team call up by Blues boss Ted Drake.

He made his debut at 17 in 1957 and scored in the 1-1 draw against Tottenham Hotspur at White Hart Lane before ending the season with 22 goals in 37 appearances which made him the club’s top scorer that season.

On this day in 1969, Pele scored the 1000th goal of his career in Santos’ 2-1 victory against Vasco da Gama at the Maracana Stadium.

The terraces were filed with 60,000 eager fans as Pele was fouled late in the game to earn a penalty. He calmly slotted the ball in the bottom right corner to reach the record breaking milestone. By the time he retired in 1977, Pele had scored an astonishing 1,281 goals for both club and country.