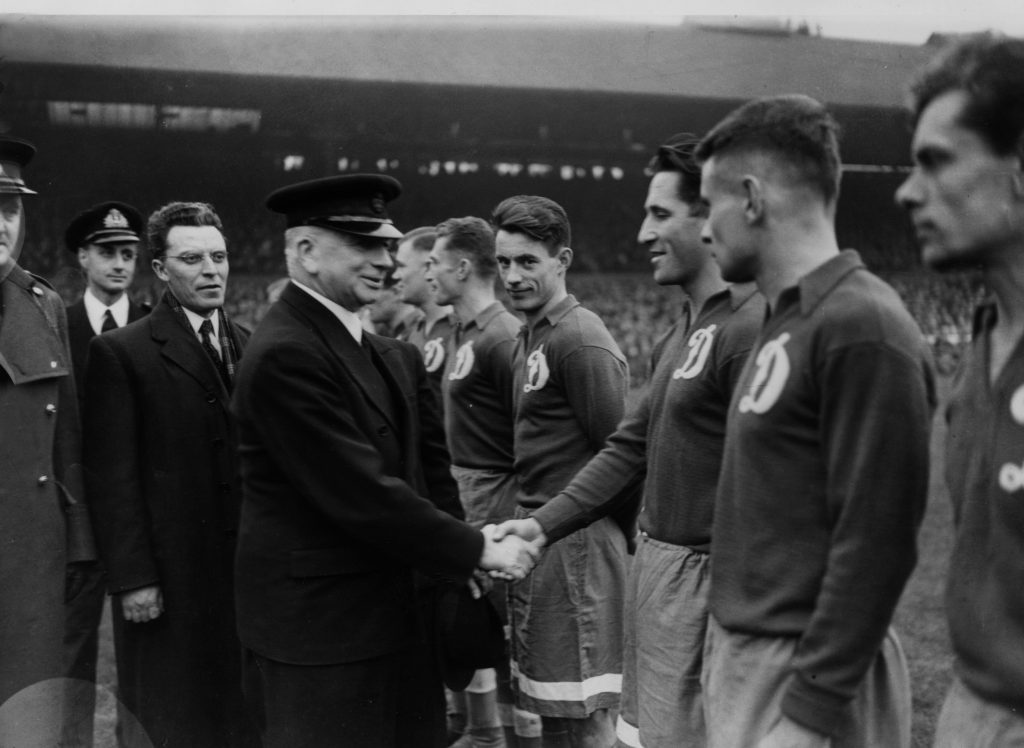 With World War II at an end, the Football Association invited Soviet champions Dynamo Moscow for a tour of Britain in November 1945.

Europe was finally at peace again which provided an excellent opportunity to take a peek behind the Iron Curtain. Apparently, the Dynamo players, before departing from Moscow, met with Josef Stalin and Lavrentiy Beria, the head of NKVD and the patron of Dynamo. The players were reportedly warned of the consequences of losing to capitalist clubs from the West.

Nevertheless, Dynamo arrived in London brimming with anticipation. The players were provided accommodation at the Royal Horse Guards’ Barracks in Whitehall. But the sight of bare beds without any pillows was so uninviting that the players refused to stay there. Word of this gross mismanagement reached the ears of the locals who offered to provide rooms to the players in their own homes. But fortunately, the FA working with the Russian embassy, put the players and those accompanying them at the Imperial Hotel.

Dynamo’s first game was against Chelsea at Stamford Bridge. The highly anticipated clash brought in a sold out crowd of 85,000 fans. Chelsea drew first blood and looked menacing in the first half but a string of saves from Dynamo keeper Alexei Khomich coupled with their dynamic attack managed to salvage a 3-3 draw.

A trip to Cardiff in Wales was next in the itinerary. The Dynamo players were presented with miners’ lamps as souvenirs to commemorate the region’s rich coal mining heritage. Cardiff City were still an up and coming side who played in the Third Division. Despite Dynamo’s impressive draw against Chelsea, many still believed that these foreigners were beatable.

A packed Ninian Park welcomed the two sides as Dynamo scored 10 to Cardiff’s 1 on this day in 1945.

Word of Dynamo’s progressive and inventive style of football reached far and wide. The club returned to London to play perhaps the most anticipated match of this groundbreaking tour. Arsenal were the opponents with a star studded line up. Players like Stanley Matthews and Stan Mortensen joined as guest players for the Gunners as the two teams went head to head in thick fog at Tottenham Hotspur’s White Hart Lane.

The match ended in a 4-3 victory or Dynamo. The Soviet heavyweights ended their highly successful tour with a 2-2 draw against Rangers in Glasgow.